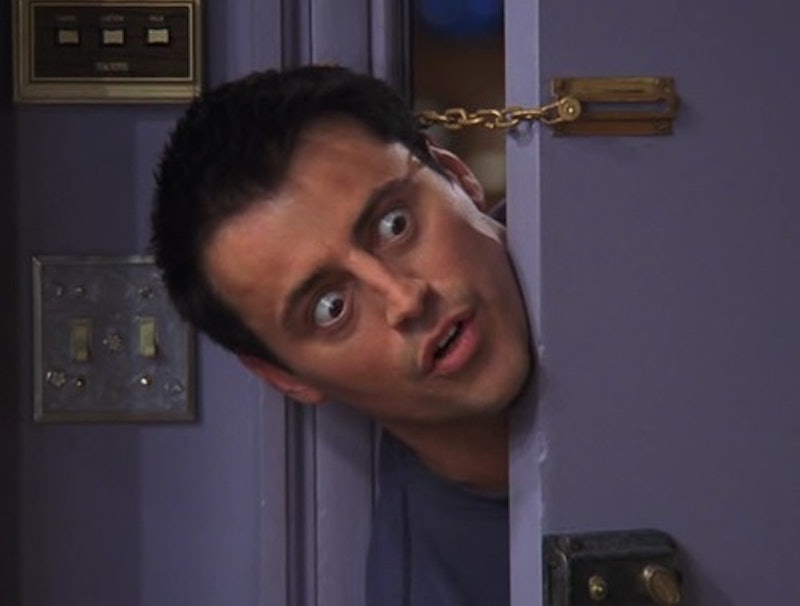 As far as entertainment goes, sitcoms have been perfect fodder for displaying every type of roommate situation imaginable. The difference between roommates on TV and real-life roommate situations is that every sitcom scenario — even the most dire — ends with a laugh and everyone remaining friends by the time the credits role. In real life, foregoing rent payments or stealing your roomie's sweater isn't going to spur a laugh track. One of my favorite sitcom characters — and consistent haver of roommates — is Joey Tribbiani from Friends. Other than that one time Joey decided to date a roommate who ended up hating Chandler and Monica (how dare she?!), the affable ladies' man was beloved by all his cohabiters.

Rent Would Sometimes Be An Issue

Being that Joey often spent more time going on auditions than actually getting paid acting gigs, there would definitely be months where his rent check would come up short. Even though Joey would take on several odd gigs, that compensation couldn't possibly have covered the rent for a nice apartment located in Manhattan.

Your Food Wouldn't Be Safe...Ever

During one episode of Friends, Joey adamantly stated, "JOEY DOESN'T SHARE FOOD!" He may not share his own food, but this doesn't mean your groceries would be respected. Remember the time Joey's date returned from a quick bathroom break to find her dessert annihilated? In other words, you would need to label your snacks very carefully — or invest in your own private mini fridge.

There Would Be A Lot Of Random Females Coming & Going

Let's face it: Joey brought home a lot of different girls. There's nothing wrong with that, of course — play on player! Still, having the lovable lothario as a roommate would mean you may need to acclimate to awkward "morning after" conversation with a bevy of randoms.

You Would Have To Bust Out Some Acting Chops

Joey often called on his friends to help him prepare for a plethora of auditions, and — as his roommate — you would be the first he would turn to for script memorization, screen tests, and the like.

He Would Be Invaluable To Your Dating Life

As mentioned earlier, Joey is a definite player, but a lovable one. Throughout the series, Joey was able to size up the true intentions of Phoebe, Monica, and Rachel's dates, while also unwittingly deciphering said dates' mixed messages. What he lacked in rent money, he made up for in dating prowess.

His Friends Would Constantly Be Around

During all 10 seasons of Friends, there was seldom a day that passed without all six members hanging out together. Would this be a caveat to rooming with Mr. Tribbiani? HECK NO! I think it's safe to say that all of us would be elated to join the gang for an oversized cappuccino at Central Perk any day of the week.