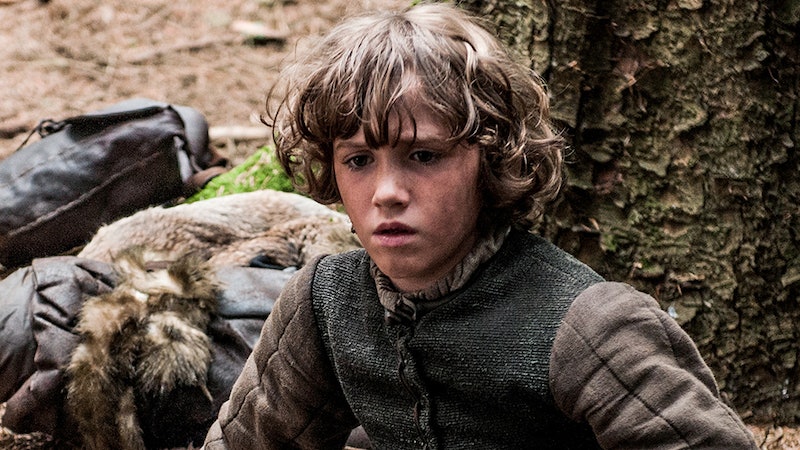 Hey, remember when there were five Stark children (and Jon Snow)? Way back when the story began on Game of Thrones, Robb, Jon, Sansa, Arya, Bran, and Rickon were all around to represent the House Stark. Now not only are Lady Catelyn and Lord Eddard dead, but so are Robb and (presumably) Jon. Meanwhile, Sansa has been married off to a mad man in the North, Arya is learning how to be an assassin in the East, Bran's "learning how to fly," and Rickon is... well, he's somewhere with the wildling Osha. The littlest Stark has never had much to do in the books or the show. As Game of Thrones moves closer and closer to an endgame, I have to wonder, is Rickon even important to this story or is he just a spare heir?

In the show, Rickon was last seen in Season 3 when Bran directed Osha to take Rickon and his direwolf, Shaggydog, to Stark bannerman Greatjon Umber at House Hearth. Since Greatjon wasn't at The Red Wedding, he is alive and well. That means Rickon and Osha might be chilling in some sweet digs in the North, just lying low while the rest of Westeros falls into chaos. One would assume Rickon would be a powerful chess piece if the remaining Stark followers were aware he was alive. If Bran is taken out of the picture — and honestly, he's so deep into the realm of magic at this point he's probably not coming back to reality — Rickon is the most viable heir to Winterfell. He could unseat Ramsay and the Boltons, even though Ramsay is married to Sansa, because he is by rights the eldest living male heir who is not learning how to talk to trees.

I am going to be totally honest here: Rickon's very existence is a puzzle to me. Like all Game of Thrones' characters, Rickon has his share of theories swirling around him. The most notable of which is he will be the only Stark left standing, and the one to carry on the bloodline. If something happens to Rickon, the Stark name will die. Robb is dead, Bran is unlikely to live a normal life, and even if Jon survives, the R + L = J theory wouldn't make him a Stark in name. Because they live in a patriarchal society, any children Sansa and Arya bore would have their fathers' surnames. I suppose that's one role Rickon could play. (Hey, maybe, George R.R. Martin is planning to use him for a next generation spin-off... OK, probably not).

In the books, Rickon is said to be in an entirely different location than he is supposed to be on the show. Since Rickon and Osha's journey was not seen, there is no way to know they are at House Hearth, so fair warning, here be possible spoilers. In A Dance With Dragons, Davos is busy trying to drum up support in the North for Stannis, and he is just about to embark on a search for Rickon that will take him to Skagos, an island full of cannibals and unicorns.

This whole journey seems like an excuse to venture to a weird new place in Westeros, but I doubt the show will be rushing to make Skagos a reality. Unlike say, the Shadow Lands, Skagos seems like filler. Within the context of the show, Stannis is dead, so Davos doesn't have any reason to go searching for Rickon, at least not yet, and if he does, it would be a lot easier to just jet over to House Hearth and pick the kid up. So again, I am left perplexed by Rickon.

Even the most random of characters prove to be important in Martin's books. Selmy showed up for a couple of scenes in the first book only to reappear later at Dany's side. Jeyne Poole was just a side character, but she became a catalyst for Theon's awakening. With that in mind, I cannot help but think there is something about Rickon I am missing.

The show made the decision to age up Rickon along with the rest of the Stark children, and if he shows up again he will be a teenager. What role, if any, does he have to play in the endgame? Rickon is the proverbial lost boy being raised by a wildling. He knows little about his family and what they stood for. By now, most of his childhood memories have likely faded. Rickon is characterized by his wildness. If he is destined to be the last remaining Stark, it is almost like there are no Starks at all. Without the advice of his parents, brothers, and sisters, then what kind of ruler could Rickon grow to be? Unless Sansa makes it to the end to coach her brother in the ways of their family the future Starks will look very little like the Starks I know and love.

That leaves me with just one final conclusion: Rickon is more symbol than he is a character. He lost his parents, his home, his family. He had everything stripped away and his surrogate mother is a badass wildling who might just be shaping Rickon into the kind of man who would continue Jon's work in uniting the North. When winter gives way to spring, Rickon will represent the new Starks. Like Arya and Sansa, he's darker, angrier, and possibly even deadlier than those who came before. Rickon is a child of war. He may not have a grand role to play in the story, but he will stand as a reminder of what happens to the children whose lives are ravaged when men tear the kingdoms apart. Some damage can never be undone, and I fear little Rickon will be living proof of that.