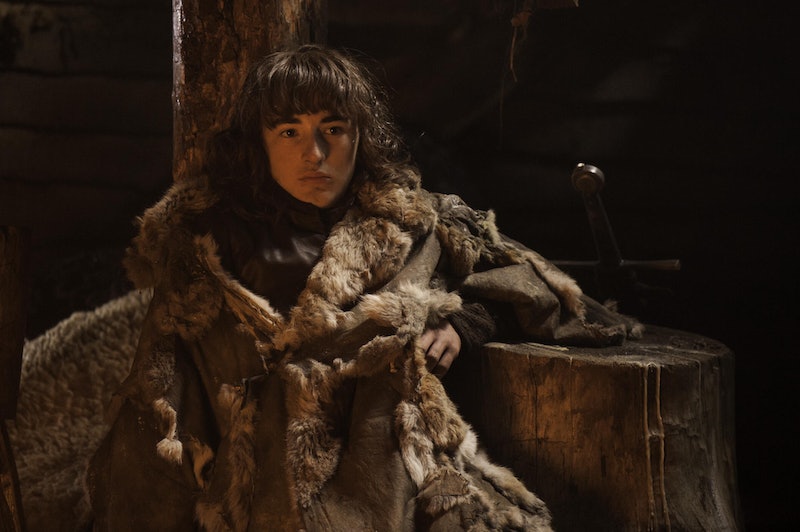 It's funny watching a Season 5 episode of Game Of Thrones and then thinking back to the first season of the HBO show and remembering that once upon a time it was literally all about the Starks. The first year of the show was framed almost entirely through the eyes of Ned and Catelyn Stark, their five children, and Ned's bastard Jon Snow. Now, with Ned, Catelyn, and Robb dead, Rickon vanished from the series back in Season 3, and Bran sitting out Season 5, the only Starks who remain are the two daughters, Sansa and Arya, and the bastard, Jon Snow. Those viewers still rooting for the scattered family are probably wondering, where are Bran and Rickon Stark on Game of Thrones lately?

Book readers know that the two living Stark sons have kept plenty busy while they've been offscreen. The last we saw Bran, he had finally arrived at the lair of the One-Eyed Raven in the roots of a weirwood tree north of The Wall, protected by the Children of the Forest. The Raven (who's really an old man literally fused into the roots of the tree) promised Bran that he'll teach the young boy how to "fly"... and we haven't seen them since.

We knew before Season 5 even started that showrunners David Benioff & D.B. Weiss had decided to take a hiatus from the Bran storyline. Citing an already overcrowded narrative and a lack of source material for the character, they decided it was better to shelve Bran's plot for a year than try to string out the one chapter remaining to him over the course of an entire season. (So you'll just have to imagine the epic training montage Bran and the Raven are undoubtedly partaking in right at this moment.)

What should we expect when Bran finally emerges from that cave in Season 6, like Luke Skywalker at the end of his training with Yoda in the swamps of Dagobah? First of all, don't get your hopes up for any Superman-esque flying sequences; the Raven wasn't being literal when he said Bran would learn how to fly. For Bran, "flying" means the ability to unfetter his mind and view the past, present, and future through the eyes of the weirwood trees scattered across Westeros — called "greenseeing." In the remaining un-adapted Bran chapter from A Dance With Dragons, the fledgling greenseer is able to glimpse the entire history of the Starks, from his father back to the old Kings of Winter, through the heart tree in Winterfell's godswood.

So, what will Bran be up to when we see him again? That depends on what you think of the Children of the Forest and their murky motives. So far, they seem to have been guiding and helping Bran for his own sake, so he can help his family fight their war against the Boltons and the Lannisters. But, what if these mysterious elf-like creatures aren't so benevolent? What if they're helping Bran for their own sake, turning him into a tool to be used in their war against the Andals?

Thousands of years ago, the Children were all but wiped from the continent by the armies of invading men. There's no reason to believe they would now suddenly feel the need to interfere in a human war to help one side against the other. So, what is their goal? If you believe some fan theories, it's far from benign. One such theory is referred to as "Jojen paste," which basically states that, after arriving at the cave, the Children killed Jojen and used his blood to create a magical paste that activated Bran's abilities. (The evidence is actually fairly compelling and would explain why Benioff & Weiss had no compunction over killing the character off in Season 4.)

Another popular theory holds that there is some connection between the Children and the Others. Some think the Others are actually a splinter group of the Children that retreated to the far north following the invasion of the Andals and learned new magic to help them push the men from their lands. Some believe that while the Others and the Children are distinct beings, they both have the same goal: the eradication of human life from Westeros.

But enough about Bran. Where's his little brother these days? The pair part ways much sooner in the books, with Osha taking Rickon away to an unknown location immediately following Ramsay's sack of Winterfell in the second book, A Clash Of Kings. Readers still haven't seen the youngest Stark again, but we finally got word on his location in A Dance With Dragons thanks to Theon's mute squire who was apparently hiding in the nearby heart tree when Bran and Rickon parted ways: he's in Skagos, a large island off the east coast of the North, infamous as the home of both savage cannibals and feral unicorns.

We learn this information when Davos Seaworth travels around the North seeking allies for Stannis in his efforts to reclaim Winterfell from the Boltons. In the court of Wyman Manderly, a bargain is struck between the Northern lord and the Hand of the King:

"Roose Bolton has Lord Eddard's daughter. To thwart him White Harbor must have Ned's son ... and the direwolf. The wolf will prove the boy is who we say he is, should the Dreadfort attempt to deny him. That is my price, Lord Davos. Smuggle me back my liege lord, and I will take Stannis Baratheon as my king." — A Dance With Dragons, Chapter 29

If Davos is successful in his quest — and if the show follows this storyline — then we may be seeing Rickon again as soon as next season. (And the little boy we left behind in Season 3 will be a 14 year old. Weird.) So, what is Rickon's endgame in this increasingly complex tale? Some fans insist that he will be the last Stark standing after all his siblings fall in battle against their enemies, and will reclaim Winterfell as the King in the North in a parallel to Robb's endeavors. Other more cynical fans believe Rickon is hardly more than a MacGuffin, whose storyline will go nowhere significant. Why do some people believe that? For those unfamiliar with the term, a shaggy dog story is "a plot with a high level of build-up and complicating action, only to be resolved with an anti-climax or ironic reversal, usually one that makes the entire story meaningless." And what's the name of Rickon's direwolf?

Yep. Turns out George R.R. Martin has probably been trolling us this whole time and we didn't even notice.