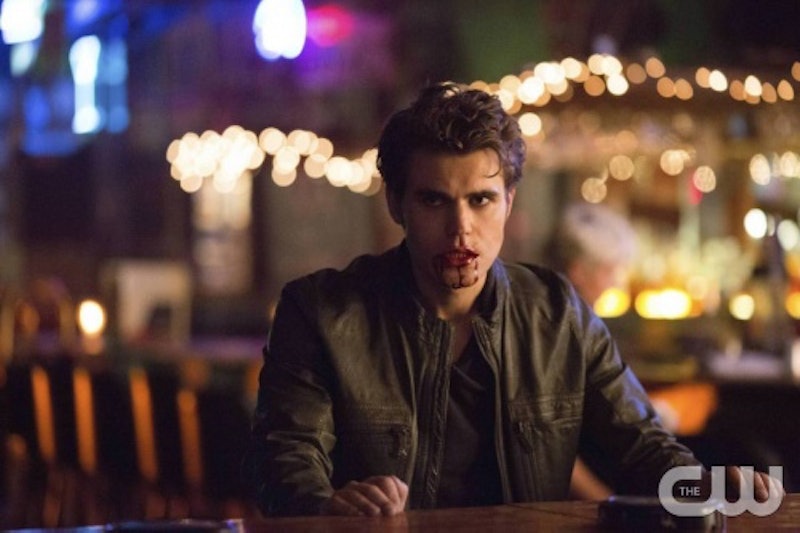 The preview for Thursday's episode of the CW's The Vampire Diaries makes it look like Stefan and Bonnie are still being put through the ringer and it's everyone else's fault. Everyone forced the issue of bringing Bonnie back to life and now she's being excruciatingly tormented by supernatural beings who are ready to die. She's literally become a human doormat all because everyone (cough Elena and Jeremy) was too selfish to let her go. Stefan, who was enjoying a clean memory slate, got his memory back because Elena and Damon just couldn't let that go, and now he's still drowning over and over again as he remembers his traumatic experience trapped in that safe at the bottom of the quarry.

So really, the two characters that everyone thought they were "helping" are worse-off than they were before they were "restored" to their former glory. (Bonnie also got a weird haircut.) To be completely honest, Stefan had plenty of reasons for not wanting to get his memories back (the #1 reason being that the love of his life fell in love with his brother), so I really wouldn't be able to blame him for wanting to stay oblivious to the past.

If I were living Stefan's life, I'd want to have my memory erased, too. Here's why.

The Love Of His Life And His Brother Fell In Love

But She Feels Guilty So She Won't Leave Him Alone

Seriously, Elena broke his heart and yet, she was the first person trying to force him to remember all of those painful memories. Back off.

He Drowned Over And Over While Everyone Lived Happily Ever After

There's not one person out of the billions of people alive, living or undead, that wouldn't want to put this whole ordeal behind them... as well as the feeling of being forgotten, which essentially happened to Stefan.

He Killed Thousands Of People When He Turned Off His Humanity

(And he didn't care.) Stefan's turns as the Ripper greatly diminished the population in certain areas of the world and at the time he was all about the vampires version of "yolo," which probably would be "yolf" (You Only Live Forever). But every time he turned his humanity back on, he felt all kinds of feelings and got overwhelmed and turned into a pod-person. It couldn't hurt to forget that.

His Brother Killed His Best Friend

Remember Lexi? Damon killed her when he was still Evil-Damon basically just to hurt Stefan's feelings. Lexi was the coolest and Stefan's only longterm BFF who also happened to be the one to bring him back from the deep, dark hole of being the Ripper. How sad is that?

Then They Met Katherine Who Turned Them Into Vampires

So yeah, according to The Vampire Diaries, getting your memory erased wouldn't be such a bad thing. Especially if you're Stefan Salvatore.