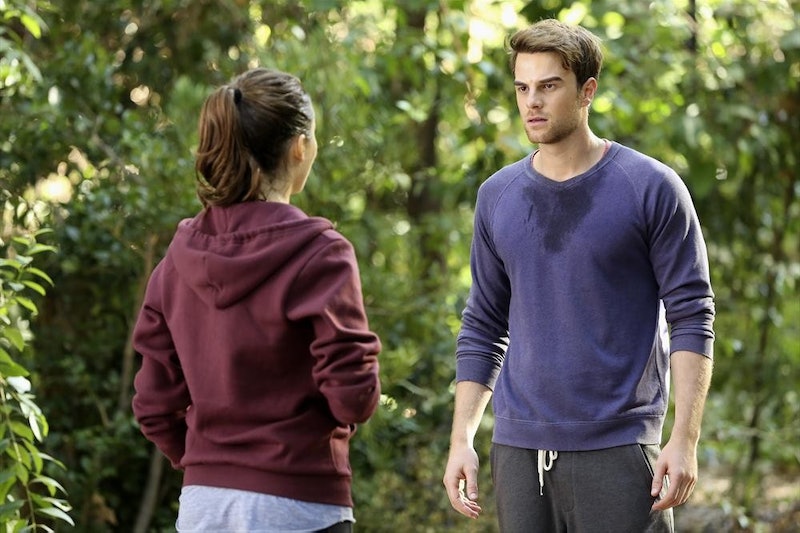 Hey guys, do you remember Dean from Pretty Little Liars? It's totally OK if you're scratching your head, trying to figure out which attractive Rosewood resident this is. I understand that there have been a lot of people coming and going from PLL as of late, so that's why I'm here to help you out. You might remember Dean, Spencer's sober coach, from all the way back in Season 4, when he showed up for two whole episodes. Ring any bells?

We first met Dean in the episode "Cover For Me," where he was introduced as basically a hired-guardian for Spencer. She had just relapsed with her pill addiction and Dean was introduced as someone to, for lack of a better expression, babysit her so she didn't relapse again or get into any trouble. Also, let's just state the obvious. Dean was really, really attractive. As if Rosewood needed anymore attractive gentlemen. Doesn't it also feel like Spencer is always ending up in situations where attractive men are just like, throwing themselves at her? If I move to Rosewood, will that happen to me?

Anyway, back to Dean. For the two Season 4 episodes he's in, nothing too monumental happens. There are two important things to mention, though. One is a dream Spencer tells Dean about, and another is why he's ultimately fired.

At this point, Spencer is still going through withdrawal. She's hallucinating strange flashbacks to the night Ali initially disappeared, and shares this information with Dean. Remember, this is all before the big information about the night Ali disappeared came out (with Ali filling in the blanks), so Spencer still kinda thinks she played a part in what happened to Ali. We know that's not the case now, but back in Season 4, her admitting it to Dean was a big thing. He became a trusted confidant for her.

The other most important part of Dean's storyline to remember is why he was fired. He and Spencer quickly grow close during his two episodes, and Spencer tries to abuse this new relationship by sneaking out to not only see her friends, but to see Toby, too. Dean insists that before she leaves, she has to pee into a cup for a drug test. Spencer isn't too happy about doing this, and objects, before ultimately complying.

Later, Spencer confesses to Dean that she's having trouble sleeping, and Dean offers to hang out with her for a while. Ultimately, they end up falling asleep on top of one another on the couch. Totally harmless and innocent, but when Mrs. Hastings comes home later, to find her newly-released-from-Radley child asleep on the couch with her sober coach, she flies off the handle. Mrs. Hastings fires Dean, and that's the last we see of him.

That is, until now! Knowing that Spencer's having issues with pills again, it makes sense that Dean would return. But, is it Spencer that reaches out to him, or someone else? Does anyone else know she's struggling with her addiction ? Can Dean stick around for a while, because he's just as attractive as like, Caleb and Jake? Why do these attractive men come and go so quickly? Just one of the PLL answers we might never know. For more on Pretty Little Liars' many hot guys, plustheories and everything else, check out Bustle's PLL podcast below.