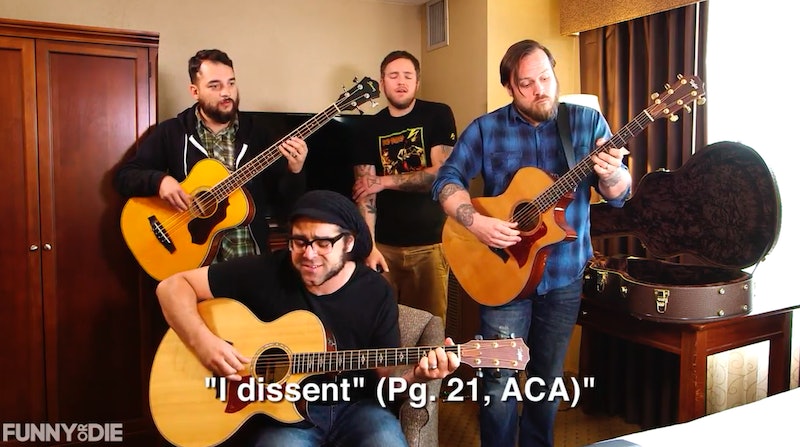 Justice Antonin Scalia has been on a bit of a tear lately, issuing scathing dissents against rulings on both the Affordable Care Act and gay marriage. Scalia compared the court's logic to that of a fortune cookie and even used the word "hippie" in his lengthy screed against marriage equality. His Obamacare dissent was even stranger, filled with hyperbole and random exclamations contingent with his age, like "applesauce." One of the greatest contradictions of his overly flowery dissents, however, is just how catchy they are set to music. Coheed and Cambria sing Scalia's dissenting opinions to prove just how wrong he is, and their tune is simply spectacular and surprisingly catchy.

The Funny or Die video opens with some mellow finger-picking and an entirely acoustic, cozy set-up for the quartet to wax poetic on words themselves and the sanctity of the highest court in the land. There are so many gems to Scalia's curmudgeonly decrees that it's impossible to imagine why they haven't been set to music sooner. The 79-year-old justice has had almost three decades to hone his writing as the longest-serving justice currently on the Supreme Court. In hopes of adding a bit of context and music to this verbose justice, here are the nine best lines from Coheed and Cambria's sweet, sweet dissenting tune:

Scalia uses this declarative sentence three different times and in three different ways during his Obamacare dissent, choosing to punctuate each point via parenthesis as if what he'd already written about how much he hates healthcare subsidies required an exclamation. It's certainly got a weird epic ode quality to it.

I'll just let the justice speak for himself via this Obamacare dissent advocating for state rights or something:

It is well to remember the difference between giving a term a meaning that duplicates another part of the law, and giving a term no meaning at all... The Court’s reading does not merely give “by the State” a duplicative effect; it causes the phrase to have no effect whatever.

Scalia certainly had a lot of strong statements to make despite considering marriage equality an issue that doesn't affect him. The justice found the decision to be less a legal victory and more of an embarrassment because... what? The opinion issued was more poetic than his? Who knows? At least Coheed and Cambria's harmonies make it better.

This must either be a legal term or a medical term.

Perhaps Scalia's scathing footnote in his gay marriage dissent can better explain the extravagances of a court advocating for equal rights:

If, even as the price to be paid for a fifth vote, I ever joined an opinion for the Court that began: “The Constitution promises liberty to all within its reach, a liberty that includes certain specific rights that allow persons, within a lawful realm, to define and express their identity,” I would hide my head in a bag. The Supreme Court of the United States has descended from the disciplined legal reasoning of John Marshall and Joseph Story to the mystical aphorisms of the fortune cookie.

Somehow issuing this out of touch and really quite bizarre advice makes Scalia feel some type of superiority. Or maybe this is his legalese way of saying "get off my lawn."

Strong statements from a very angry man who, to reiterate, says that he holds no personal investment in the gay marriage ruling and who also doesn't consider California real or something. As per his dissent: "California does not count."

Rebranding is actually a really trendy step and I applaud you, Scalia.