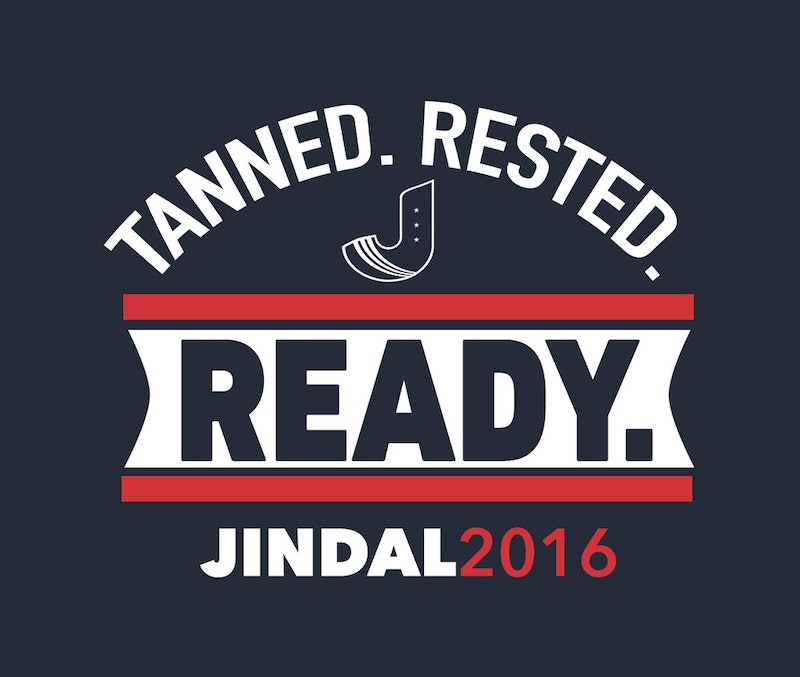 Yes, that image you're looking at is an official T-shirt being offered by Bobby Jindal's campaign website. In fact, not only is it being sold for $20 a pop, it's being presented as a limited edition Tee, which basically tells Jindal supporters, "Better hurry! This is an exclusive product that you have to grab before it's gone!" But Bobby Jindal's "Tanned" T-shirt is so wrong that why no one paused to say, "Hmm, this might not be a good idea..." is beyond me.

The T-shirt, which also sports Jindal's much-ridiculed campaign logo, boldly presents his (un)official slogan, "Tanned. Rested. Ready." The T-shirt listing also includes a disclaimer that "colors are subject to change," but whether that means the colors might get a little tanner is unclear. More likely than not, they'll wash out and your Tee will actually get a little paler. (Sorry, folks.) The T-shirt plays off Jindal's presidential announcement speech, during which he openly referred to himself as "tanned."

In case it’s not clear by now, I’m running for president without permission from headquarters in Washington D.C. But rest assured — I’m tanned, rested, and ready for this fight.

Jindal has long been under scrutiny for his presentation of race, namely his own, as critics blasted the Louisiana governor for seemingly distancing himself from his Indian roots. Soon after Jindal announced his candidacy, the hashtag #BobbyJindalIsSoWhite began trending as Indian Americans and other South Asians reacted negatively to Jindal's announcement.

But in an email to supporters, Jindal's campaign manager Timmy Teepell blamed the "liberal media" for the coverage and offered the "Tanned" Tee as a way to "make the left even more upset."

The liberal media that developed this week was disgusting: Apparently Bobby isn't brown enough for them. Well, this will make the left even more upset. We are now selling the first limited edition t-shirt of the campaign, and I want you to know about it.

Color-blindness is not the solution to racism. Calling yourself tanned instead of embracing that you were born a color is the wrong message to be sending to anyone. Hate to break it to you, Gov. Jindal, but you're not tanned. Being tanned implies choice: "I choose to be a darker shade than my natural skin." And as any minority can tell you, they did not choose the color of their skin any more than they chose the race they were born into.