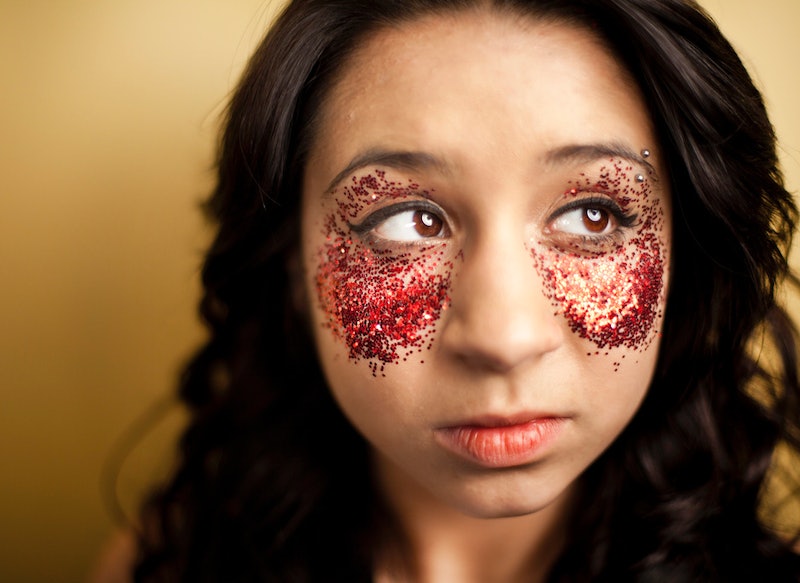 Throughout my years as a makeup artist, I’ve completed a wide range of looks from natural to trendy to daring makeup. As fun as it is to try something different with a client (I love when they are open-minded to new styles), I’ve definitely received my fair share of weird makeup requests. I love experimenting with beauty looks as much as the next girl, but there’s definitely a limit to how far I’m willing to go during a makeover. Some of the most bizarre requests I’ve gotten are as simple as a poor choice on the color wheel, while others are downright health hazards.

I’m not really sure why people ask for some of the things that they do during a makeover. (But then again, why do humans do any of the kooky things we do?) It could be down to wanting to take a risk or it could be spurred by an insecurity. Whatever the reason, it doesn’t stop some clients from pushing the limits with their MUA.

Ultimately, it’s good to be picky and choosy when it comes to something like a makeup appointment — it shows that you know what you want and your MUA will respect you for it. It’s not OK, however, to set unrealistically high expectations for how the makeover should go, as it will only make your life and your makeup artist’s life so much more difficult than they need to be. Before you head to your next appointment with a MUA, stay away from some of the weirdest and most surprising requests that I’ve ever heard.

1. "I just need to get my friend's/boyfriend's approval on the phone first!"

Collaborating on a makeup look can be super fun and enjoyable for both parties when done in the right way. That is until a client brings their significant other into the mix. It’s perfectly fine to have input from another person, but during one particular makeover, I had to relay everything that I was doing on a client to someone else on the phone.

What makes this so bizarre is that my client was the one who was going to be wearing the makeup, not the person on the phone. Needing to receive someone else's approval for every single step I was performing was bonkers.

I’m all for playing around with glitter while applying makeup. It can make an eye look stand out like no other. Glitter can even look beautiful when applied on the cheekbones as a highlighter or mixed with blush. But beyond that, it can start looking pretty wild.

However, that’s exactly what one client was going for when they asked for huge glitter pigments to be used as a finishing powder all over their face. I did everything to talk the person out of it, but the heart wants what it wants.

Whenever a person attempts to be too matchy-matchy with their makeup, the entire look can get weird pretty fast. Matching a lip color to a bag or dress can look effortlessly trendy if done correctly, but going for the same color in every possible way from head to toe is just odd.

I once had a client who wanted to match her eye makeup, cheeks, and lips to a blue and red checkered shirt that she was wearing. The dramatic red and blue smoky eye turned out to be of Black Swan proportions, while the lip was as neon as it gets. Everything about the look was off and made for such a bizarre end result.

At first, I thought that this person was kidding, but it quickly became obvious that the request was dead serious. Makeup is usually meant to enhance a person’s natural beauty, not completely change the way said person looks until they're totally unrecognizable. As much as I sometimes wish makeup could help me hide signs of aging, it’s not a fountain of youth and can only make you look slightly younger to a degree. Twenty years is just pushing it.

5. "I just want blinged out eyelids."

Bedazzling clothes or accessories can be a fun fashion risk to take every now and then, but when you bring the bedazzling to your makeup look, it’s a whole other ball game.

A client once asked to have rhinestones placed all over their eyelids for a night out. Even though this is a popular look on Instagram or on the runway, I doubt that those rhinestones are going anywhere beyond the camera, and they’re definitely not practical if you’re trying to dance in the club.

6. "Make sure to use calorie free lip gloss."

I’m not sure when lip gloss began to be considered part of one's daily calorie intake, but apparently it’s a very real concern for some. Right before I was wrapping up a look with a client, they requested that I use only lip products that were free of any calories. I didn’t even know that such a thing existed, but it was safe to say that my mind was blown.

7. "I need mascara that lasts for days."

Eyelashes can be tricky to work with when you’re a makeup artist, since people have very distinct preferences about how they want them to look (clumpy, non-clumpy, voluminous, etc.). Having a specific style in mind is all good, but once, I had a client who asked me to apply a waterproof mascara that would stay put for days (even while sleeping). Not only was this super unhygienic and a health hazard, but there isn’t really any mascara out there that can do that, so I wasn’t able to meet her request after all.

You win some, you lose some.

More like this
These Are The Best Cheap Beauty Products Because They Work So Damn Well, According To Makeup Artists
By Alexandra Elizabeth
19 Memorial Day Beauty Sales To Shop In 2022
By Audrey Noble
Kim Kardashian's Ombré Pink Mani Features A Nod To BF Pete Davidson
By Paris Giles
What Are "Gym Lips" & Why Is BeautyTok So Obsessed With Them?
By Olivia Rose Ferreiro
Get Even More From Bustle — Sign Up For The Newsletter