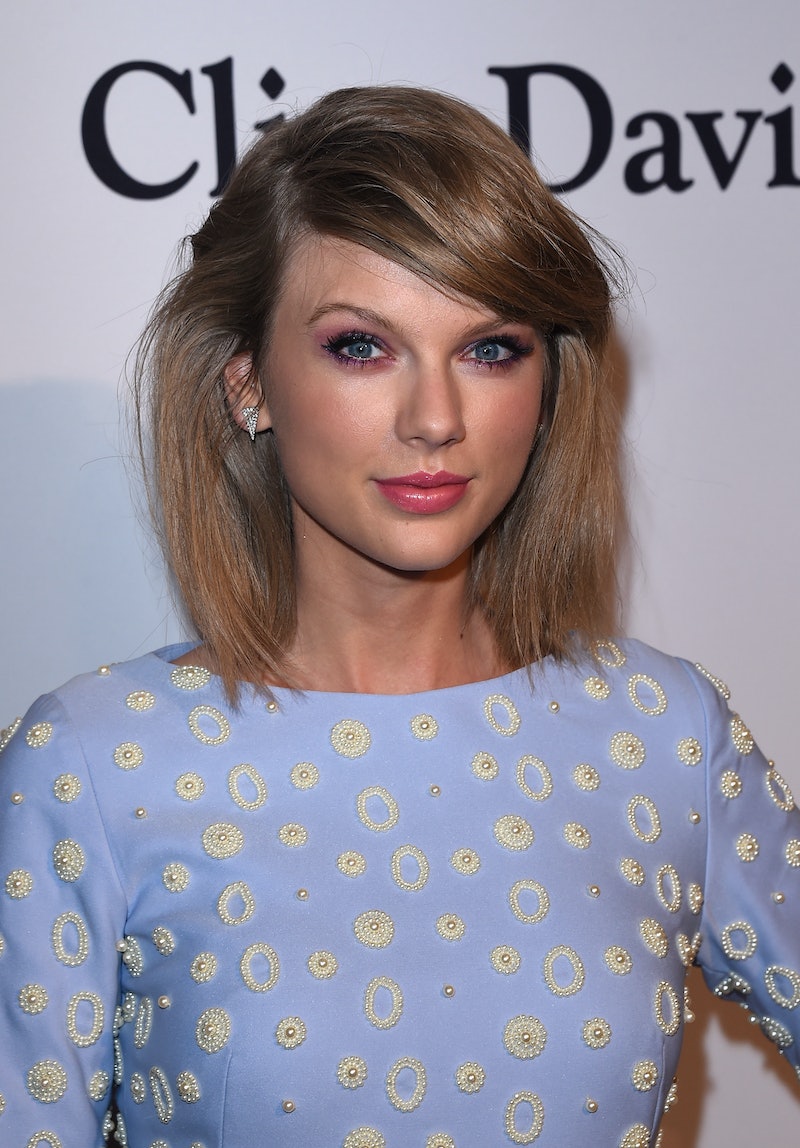 As a formerly obsessive Jonas Brothers fan and a currently obsessive Taylor Swift fan, when Swift and Jonas were dating in 2007, they were basically my ideal celebrity pairing. But when they broke up, there was no question about whose side I was on: Swift's, obviously. Even though they were adorable together, Swift's song about the relationship, "Last Kiss," is one of the saddest she's ever written, so something gives me the feeling that their breakup was pretty rough on her. But years have passed, and time heals all wounds, right? But even though the former couple has been seen politely chatting at award shows and events since then, it's not like they're actively getting together to chill and reminisce about old times like BFFs... 'til now. While we were all asleep Sunday night, Swift and Jonas were hanging out in London. No, like, actually hanging out, and there's photographic proof.

In the wee hours of Monday morning (American time, anyway), Swift shared a photo on Instagram of herself in a boat in London, joined by her rumored boyfriend, Calvin Harris, and her friends Karlie Kloss and Gigi Hadid... and, you know, Joe Jonas. And basically, my mind is exploding.

Although I've never been one of those people who thinks being friends with an ex is a good idea, maybe Swift is, and for that, I definitely respect her. But that doesn't mean I have a few questions running through my head right now.

1. How did this even happen?

Like, really. How did it come to be that Joe Jonas is on a boat with Taylor Swift right now? Am I the only one still hurt about that 27 second breakup phone call?

Did Taylor extend an invite? I bet she did. She's so cool.

3. Does this mean they're officially cool with each other?

And not just cool in a way that means they don't avoid each other when they run into each other in public, but cool enough to actually hang out and be tourists together like this? Are they actually chatting and enjoying each other's company, or is Gigi Hadid acting as a physical barrier between them and their forgotten love?

Like, a relationship post mortem, maybe, where they got all their feelings out on the table? Because I would love to see that.

5. How does Calvin Harris feel about this?

Even if Harris is as cool as I suspect he is, I bet it was at least a little awkward, because how could it not be?

6. Did Calvin Harris give Jonas dirty looks all afternoon?

I totally would have.

7. Is this because Jonas and Gigi Hadid are actually dating?

They've been rumored to be dating for awhile now, but this might actually prove it. It would make a lot of sense if Swift let Jonas come along because he's dating her friend.

8. Is Swift that good of a friend?

9. Who took this picture?

Let's look at it again. It's so perfect.

Because I am not a magical unicorn like Taylor Swift, and all I ever Instagram are poorly composed photos of my cat.

11. But really, how did Jonas even manage to make it to this hang out?

I can't get over it.

That would be so embarrassing.

No, it doesn't, because at the end of the day, they're two people who used to date as a teenagers and now they're adults who act like adults who don't hold grudges.

14. Can we talk about how cute Calvin Harris and Taylor Swift are together?

They're SO adorable, and despite Jonas' presence, that's the real takeaway from this photo. TAYVIN FOREVER!