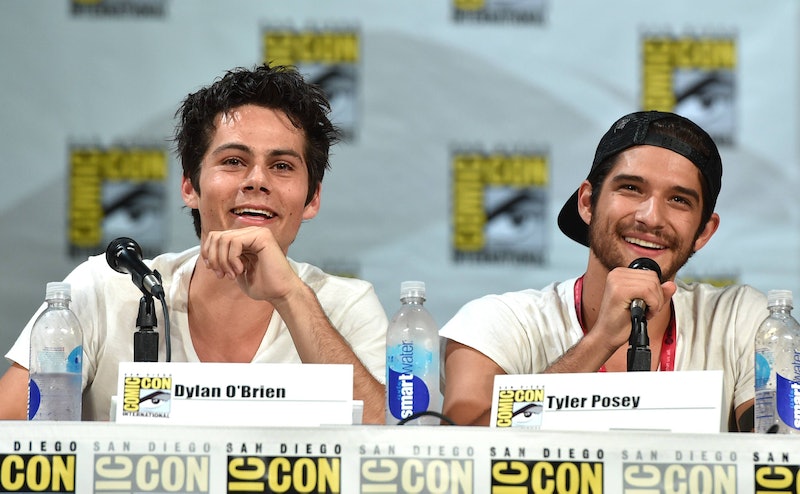 Season 4 of Teen Wolf was... confusing. Entertaining! But also confusing. There were what felt like 100 Big Bads in the form of Kate and her berserkers, Peter and his extensive ego and v-neck collection, Meredith as the unexpected Benefactor, and all of her assassins popping up all over the place just waiting to hatchet someone in the chest or weaponize a virus during the PSATs. It started to feel like the McCall pack was doomed, and maybe that was creator Jeff Davis' intention leading into Season 5. Of the upcoming season, Davis told TVLine, "We took this as a season to re-concentrate on the teens of Teen Wolf. " The titular teens have managed to stay alive, so it's time to look towards the future and everything we know about Teen Wolf Season 5.

Many fans may be excited that though there isn't a ton of information circulating about what to expect from Season 5, most of the clues point to it being a Lydia-centric season. In a show that has been known to loop in a were-coyote, a kitsune, and a nogitsune-possession in one fell swoop, Teen Wolf has been particularly methodical in revealing the banshee mythology to its audience. Lydia has taken her time — even when she didn't want to — in discovering her powers, what they mean, and how to deploy them to best aid the pack. With the release of the first six minutes of the Season 5 premiere, it looks like some evil forces are actively working against all that progress. Here's what we should expect when Teen Wolf returns on Monday night.

Uh oh... things are not looking good for Lydia. But they're also looking... different. In the Season 5 premiere, Lydia reveals herself to have some new powers while trying to escape Eichen House, possibly a special supernatural wing of the facility. It might have something to do with Doctor Valack, a patient there who just so happens to have a third eye that drives everybody who looks into it crazy.

Like Season 3 of Teen Wolf, Season 5 will be split into two parts, and Davis revealed to TVLine that the first half of Season 5 is all a flashback. So, while Monday's premiere starts in the future with Lydia screaming her banshee cry at Eichen House, it looks like we'll spend the rest of the season figuring out how she found herself there.

Derek Is (Mostly) Out

You may have noticed in that Lydia clip that there's at least one blast from the past in Season 5 in the form of dead-alpha twin, Aiden. Unfortunately, the show couldn't keep the whole cast together, as Entertainment Weekly reported that Tyler Hoechlin won't return as a series regular in Season 5, as confirmed by Davis. But the showrunner also teased that we've "not seen the last of Derek Hale." He probably won't be in the first half of Season 5, but keep your ears open for clues of his reemergence.

(BONUS: Bad ass Braeden will be back in Season 5, whether Derek is there to spoon with her or not.)

With a little room in the opening credits, Dylan Sprayberry is now a series regular in Season 5, and as Scott's only bitten Beta, his place in the pack seems secure. But Season 5 is also adding in a new teen wolf, this time of the lone variety. Cody Christian is joining the cast as Theo, someone the Beacon Hills crew knew years ago and now finds him returning as a lone wolf in need of a pack. Tyler Posey told TVLine, "We don’t know what the hell he’s been up to, so it’s hard to trust him. But he’s very charming... so I think Scott’s on board." Oh Scotty, I hope you're right.

The Doctors Are... Also In

The name of this season's Big Bad — The Doctors — has been floating around for a while, but the cast and crew have kept tight-lipped about exactly what kind of threat The Doctors pose. Judging by the Season 5 trailer, let's just say, it doesn't look like they're the kind of doctors who wear scrubs. And according to Lydia, certified genius: "They're coming... they're coming for all of us." And this on top of college applications? It looks like the Teen Wolf pack has quite the senior hear ahead of them.