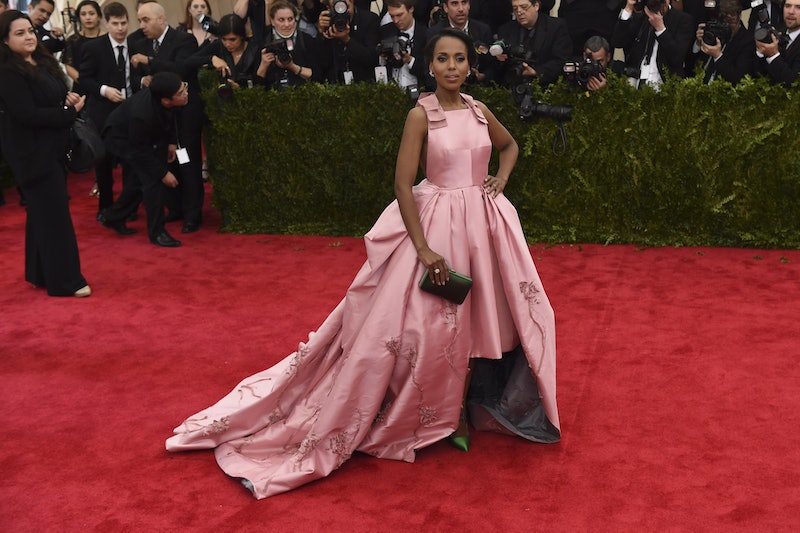 In the world of fashion, beauty, and celebrity style, it can seem at times like the best of the best is reserved for the young — you know, for girls in their 20s, or even younger. In my opinion, though, there are plenty of style icons in their 30s to look up to, and they deserve some more attention. Some of our favorite fashionistas may have risen to greatness in their 20s, but their sense of style and endless inspiration didn't stop once 30 rolled around.

In fact, for many of them, it seems like a new decade was just the beginning. I'm all about keeping myself young at heart and breaking the rules of style when it comes to what I'm told isn't "appropriate" to wear in my 30s, but I also love gleaning from the celebrities and media personalities my own age. As much as Kendall Jenner and Cara Delevingne give me serious fashion envy, I'm just as likely to drool over the sartorial genius of women like Alexa Chung and Mindy Kaling.

So here's to the style and appeal of women all around in their 30s who've been around the block and know how to look good at any age. Here's to the women who remind us that being in your 30s is just as hot as being 21 and to those we just can't seem to get enough of their individual and unique fashion game.

Her style hasn't slowed down at all since she's crossed over into her 30s, and she's still known to be rocking a mix of fun and classic looks. Chung is always able to keep her look personal and effortless, and has managed to become one of the most modern and smart media personalities of our time.

Neither hitting 30 nor being a mom has changed Queen B's status in our fashion hearts. In fact, these things have enhanced her appeal both to her fans and to the world over, as she continues to slay outfit after outfit, appearance after appearance, and concert after concert. If she hasn't won over your heart by now, well, that's your loss, IMO.

From her time in the limelight on The O.C. to her infectiously likable character on Heart of Dixie, Rachel Bilson has made it easy to love her down-to-earth style and happy-go-lucky appearance. She's kept up her girl-next-door vibe through the beginning of her 30s now, and it doesn't look like she's going to stop anytime soon.

Leading funny woman Mindy Kaling hasn't let her 30s keep her from her quirky and catchy style. She's proven to us all that being yourself is always the best and that it's never too late to reach for your dreams. Her relevant and fun personality will keep her influential for many years to come, and I'll be rooting for her and her style all the way.

Even though she's got an extremely royal sense of style, the Duchess of Cambridge always comes across as relatable and relevant to her generation. Though we may not ever get to see her in a "average" light, she's still a style inspiration in her own right for choosing such flawless ensembles time and time again. And she's pretty much the poster girl for a signature hair look that hasn't gone out of style since she first came into the public eye.

Kelly Clarkson has had to deal with a ton of unfair body-shaming in recent years, as she doesn't look the same as she did in her early days in the spotlight. But she's risen to the challenge and inspired many of us. No matter what the critics say, there's always a way to continue coming out on top. Motherhood looks stunning on her, and her style has only increased in its relatability and wow-factor.

Consistently on best-dressed lists year after year, this woman is a force to be reckoned with. She's got a super chic style, with plenty of personality to spare. Her sweet demeanor and lovely smile keeps her looking fresh on into her 30s, and her acting game just gets better and better with time.

She's burst onto the scene fairly recently, and I just can't get enough of her. She's quickly becoming a style icon in her own right because of her blatant disregard for plus-size fashion so-called rules and her ability to rock whatever she wants. She's got a killer personality that not only makes you laugh, but also warms your heart with her genuinely positive vibes.

I feel like I grew up with America Ferrera, thanks to her roles in Sisterhood of the Traveling Pants and the amazing four seasons of Ugly Betty. It was her evolution on the latter show that catapulted her into style icon status for me, and I still see her as a woman rocking her look in her 30s, with a certain grace and spunk that only she can exude.

More like this
Most Comfortable Underwear For Big Butts
By Audrey Williams
Are Skater Shoes the Next Y2K Trend to be Revived by Gen Z?
By Lauren Alexis Fisher
The 11 Best Front Closure Bras For Big Boobs
By Maria Cassano
Kendall Jenner's Cowboy Boot Tattoo Is The Cutest Micro-Ink
By Sophia Moore
Get Even More From Bustle — Sign Up For The Newsletter