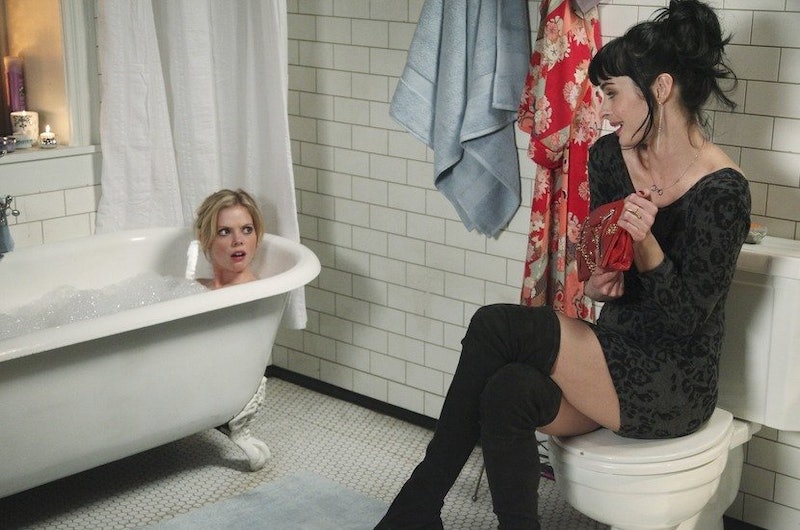 In the past decade, I've cycled through close to 30 roommates in four states and two countries, so when it comes to roommates, I know what I'm talking about. It should be noted, though, I now live alone. What I have learned in the years that I wasn't on my own is that tolerance is wholly necessary when sharing a living space with another human, but there are some signs you urgently need to bail. In fact, there are some things you should never tolerate in a roommate situation.

First of all, I'm certainly not preaching princess standards or expectations. If you've never had roommates other than your parents, listen up: Roommates are not around to take care of you. They will not put you first. They might not even put you second. They don't live with you to follow your preferences and homegrown rules as gospel. You will be uncomfortable at times. You will have to compromise. There's no way around it.

What's a normal compromise? Say, for example, you have a daytime job but your roommate has a nighttime job. So instead of pumping yourself up at 6 a.m. for the shift ahead with some blasty Nelly throughout the shared apartment, you don headphones. Your roommate follows a similar protocol when they shower after their gig at 3 a.m. That kind of compromise is to be expected, and if you believe otherwise and do not plan to live alone, I seriously wish you good luck.

And on that cheerful note, here are some other legit things one should never have to deal with in a roommate:

No grown woman has time for passive aggression. It's true everyone is busy and it can be tough to make schedules coordinate in a way to allow face-to-face time. But! It's important to be upfront about issues before they build up into bigger things and threaten to get legit out of control. A good way to make something small explode is to discuss only via text or fridge notes. If your roommate has note tendencies, confront them and explain you'd much rather abandon egos for direct communication. However, keep in mind that if you're going to actually commit to this, you gotta also be ready to drop your own defensive impulses. This can happen, but it must go both ways. Should they keep up the notes or texts and avoid confrontation, try to get outta there.

Borrowing your stuff without asking

Some items must be shared. Items like kitchen appliances, blankets, and communal towels are gonna grow legs at times. But when roomies start assuming items like personal clothing or luxury bath items (like anything nicer than hand soap, I have low standards) are cool to use with your consent, that's bad news.

Handing off keys sans prior discussion

A serious violation of trust and respect, TBH. (I have been guilty of this. A fact I am not super proud of.) Every person has a right to feel safe in their own home, and when other folks waltz in unannounced and uncleared, that legit feels scary. A former roommate once—unbeknownst to me—gave a new boyfriend a set of keys. So when I was making eggs in my underwear (as one does) and he came busting in, I almost freaked out at him with a spatula.

Throwing a party with no heads-up

Especially as we get older and more chill (read: "boring"), it can be a mega bummer to come home tired to find a rager banging in your living room. Not only does noise pose a problem, drunk people aren't exactly renowned for manners or respect of others' privacy. It wouldn't hurt your roommate to text a tip before you leave work so you can make plans to unwind elsewhere. That's baseline respect, but any roommate worth the communal salt will start a legit conversation pre-party to get clearance from all housemates.

Entering your room without permission

Unless it's clearly on fire, none shall pass.

I have never had sharing food really work out in any of my numerous arrangements. Remember, 30 roommates in 10 years. I know what I'm talking about. Sharpie initials exist for a reason, and that reason is so people without those initials will keep out. To blatantly disregard ownership is really rude. Plus it's annoying to count on some delectable take-out leftovers only to arrive home and find a sad, empty cardboard in the fridge. Side note: It is a true crime to keep empty containers of anything in the fridge. There is recycling and a trashcan. Use them.

Even if you, as a group, decide one person is in charge of keeping the kitchen neat, another the bathroom, a third the living area—that's great. Or perhaps you all prefer a rotating wheel of who does what when. Whatever your method, make sure everyone keeps up with their own end of responsibilities in cleaning, bills, and maintenance. When someone outright refuses, time to get out.

Repeat offenses being late on bills

Everyone has thin months, unfortunately. But when a roommate frequently asks you to help float them "just this once" or because they are "waiting on a check," you need to put your foot down. You work hard for your money and so should they.

Getting freaky on your furniture

Unforgivable. Keep that jazz in bedrooms only.

Long and frequent incidents of shower HOOKUPS in shared bathrooms

Same rules as above, plus holding up the entire bathroom for unnecessary reasons is super selfish.

Examples: randos, total strangers (kinda like randos, but a bit riskier to allow into your home, especially at night), and folks who stay through the morning and into the day even though your roommate (their escort) has left for work.

Overnight guests that won't go away, start receiving mail, and don't contribute to any of the bills. Nope, no way, please try again.