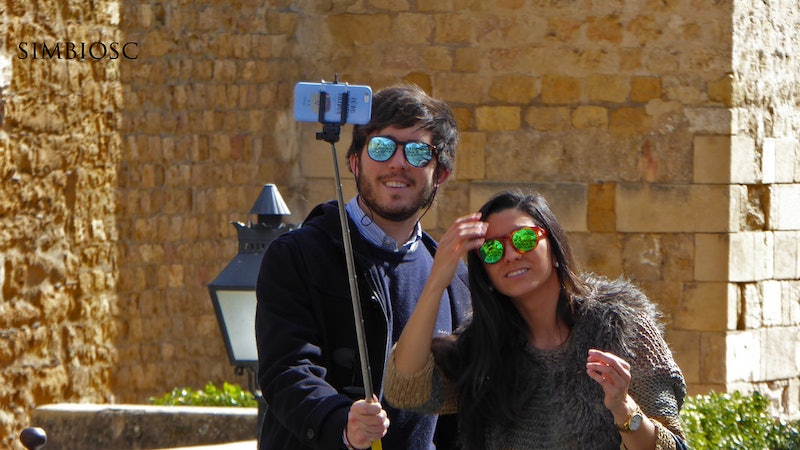 Guys, selfie sticks are dangerous. I'm serious — which is why I'm personally relieved that big, busy places like the Disney Theme Parks are banning selfie sticks. I don't know about you, but I think being victimized by this horrific piece of technology is no fun. Allow me to set the scene: It's a cold, winter day in Philadelphia, and our heroine (me) is awkwardly shuffling her way to class (I find running with a backpack to be very stressful, so I do the speed walk/ shuffle)... when all of a sudden, she is struck in the shoulder with a piece of cold metal. No, it was not an umbrella or a wayward piece of space junk; it was a selfie stick that someone had lost her grip on, leaving me with an unsightly shoulder bruise for several days. This is why we can't have nice things.

It's also an example of why it's such a good idea for Disney to ban these awful things from all its parks. Disney previously attempted to ban selfie sticks just on rides, but people are horrible and kept pulling them out in the middle of rides anyway. According to The O.C. Register, the California Screamin' rollercoaster at Disney California Adventure was even shut down and evacuated last Wednesday due to someone yanking out a selfie stick mid-ride, because guess what? It turns out that upside-down rollercoasters are not the best place in the world for stray lengths of metal. So, in order to respond to the threat that selfie sticks pose both to guests and "Cast Members," Disney has just decided to ban them outright. It's like when your mom tells you that you can have a cellphone as long as you don't text during dinner, and then you do anyway because YOLO, so then she takes it away and your whole social life is ruined. I hope we're all happy with ourselves: We've made the Disney Theme Parks become our mom.

So, you're going to leave your selfie stick at home (or just, like, throw it away or melt it down for scrap metal because it's a nightmare that has been inflicted on our society) the next time you go to a Disney Theme Park; the no-selfie policy goes into effect at Disney World, Disneyland, and California Adventure on June 30 and at Disney's Paris and Hong Kong parks on July 1. But what else can you not bring to a Disney Theme park? I investigated, so you don't have to. None of these things are welcome in the House of the Mouse, and with good reason.

Why, oh why, is this an item that people tried to bring into Disneyland so frequently that it had to be explicitly banned on their website? I know Grandma loved Disney, but do you really think she wants her eternal resting place to be in the murky water of the Pirates of the Caribbean?

Katniss would be so displeased.

I'm not sure why anyone would need to bring handcuffs or zip ties to a Disney park, but, well... it's probably worth saving them for somewhere else, no matter how Matterhorny you are. Just saying.

I am the most unclear as to why anyone, ever has tried to enter a Disney theme park with pots and pans. What could you possibly use those for? Ugh, I probably don't want to know.

These should be banned from everywhere, as far as I'm concerned. Unicyclists are the kind of people who think their ability to do a single cool thing makes it chill that they're failing at every other aspect of adulting. I'm 100 percent with Disney on this one.

More like this
11 Trends From The ‘90s That Made You Feel So Cool
By Julie Sprankles
Remember These Ancient Pieces Of '90s Tech?
By Lucia Peters and Emma Carey
8 Creepy Things You Probably Did In The '90s
By Julie Sprankles
Starbucks’ Chocolate Cream Cold Brew Tastes Like This Retro Candy
By Emma Garza
Get Even More From Bustle — Sign Up For The Newsletter