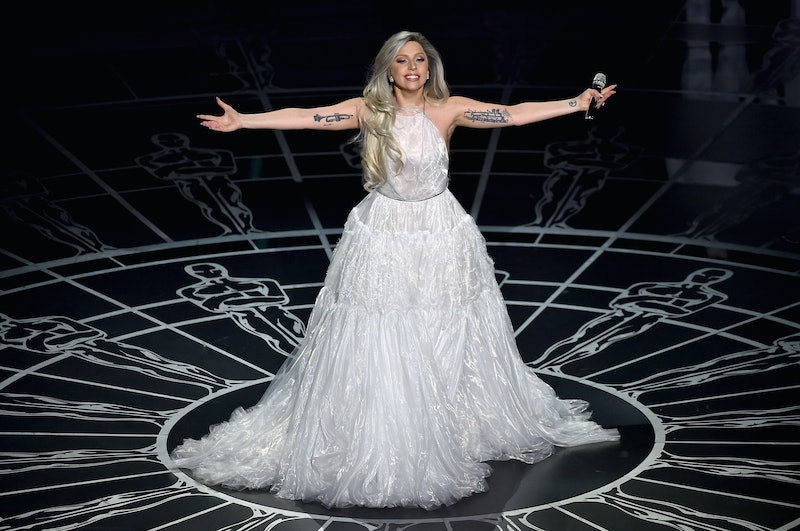 If there is one force of nature that is greater than Lady Gaga herself, it is the expression and concept of "YAAAS GAGA," which has since become the battle cry for hardcore fans everywhere. So when Lady Gaga met Hillary Clinton and flaunted a "Yaaas Hillary" t-shirt, the stanning had officially come full circle. Allow me to explain.

Let's start at the beginning: "YAAAS GAGA" started with a video of one very enthusiastic Little Monster stanning his face off for his queen when she stepped out to greet her public looking regal AF. Since the fan understandably couldn't find his chill, he showered Lady Gaga with one compliment after another, shouting: "YAAAS Gaga! Yaaas. You look so good. Yaaas!" The vid went viral and "YAAAS" was born, the choice expression for Internet users who need to accurately convey how much they worship their idol and whatever it is she or he does. Broad City took "YAAAS QUEEN" to new heights, thanks to one memorable scene, which has me peeing my pants every time I watch it. Let's be real: Any form of "YAAAS" is my probably my favorite expression to come out of the interwebz since "AF," which I make a point to try and use on the daily.

Since the advent of the phrase, Lady Gaga has mentioned "YAAAS" herself (particularly in reference to Broad City ) but never quite to the extent as she did with the presidential candidate over the weekend. Mother Monster and Tony Bennett (oh yeah, Tony Bennett was also there) performed at a fundraiser for Hillary Clinton, Variety reports, and then posed for a picture with her afterwards. The pic — which Clinton later posted to Instagram — shows the potential POTUS laughing as she stands in between Bennett and Gaga, who is holding up a shirt with "Yaaas Hillary" emblazoned across the front.

It's always exciting when celebs lose it over other celebs (or politicians, as the case may be) because it really proves that ~the stars, they're just like us~. And with Lady Gaga stanning for Hillary Clinton so hard she even had to use "YAAAS" to get her point across, well, that just elevates things to a whole other level. YAAAS.