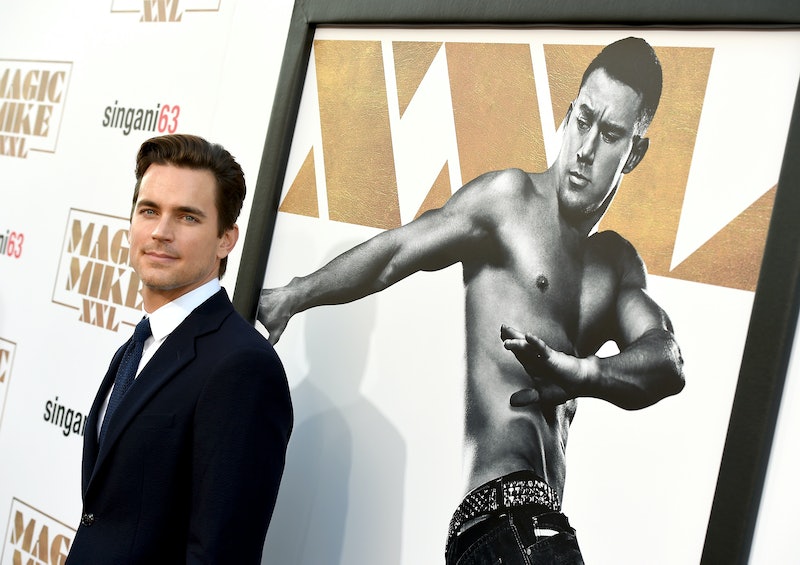 While the Magic Mike film franchise is certainly better known for its moves than its tunes, music plays an integral role in setting the scene and providing a beat for the characters' dances. The first film made something of a celebrity of Ginuwine, whose song "Pony" soundtracks one of Channing Tatum's most memorable routines, and in Magic Mike XXL, song sometimes takes the lead over dance. Matt Bomer's character Ken, for instance, serenades a woman whose husband will only get it on with her in the dark. In an interview on Late Night, the actor revealed that he sings Bryan Adams' crooner "Heaven" to her and a group of friends who hired him for the night. It's a gorgeous performance, and one that'll have you leaving the theater wondering, can Matt Bomer really sing?

In fact, he can. Between the Bryan Adams song and a cover of what he described to USA Today as "the sexiest song of all time," D'Angelo's "Untitled (How Does It Feel)," Bomer shows off some serious range in Magic Mike XXL. In the actor's interview with Seth Meyers, he revealed that the movie had such a shoestring budget that the cast members themselves entertained extras in between takes. When Bomer's turn was up, co-star Joe Manganiello urged him to sing — and sing he did. It made such an impression on the movie's creator and star Tatum that he asked Bomer to sing in the sequel.

Both of Bomer's songs will be available on the Magic Mike XXL soundtrack. It's his first big-screen singing gig, but the star has lent his vocal talents to television for several previous roles. In case Magic Mike XXL doesn't quite satisfy your thirst, check out these past scene-stealing songs by Bomer on everything from White Collar to Glee:

1. "Somebody That I Used to Know," Gotye

Bomer's brief stint as Blaine Anderson's self-absorbed, aspiring actor brother Cooper on Glee had him dueting with Darren Criss on multiple occasions. Cooper's big break was a song for a commercial for a website, FreeCreditRatingToday.com. Blaine and Cooper lamented their difficult childhood, putting a platonic spin on Gotye's "Somebody That I Used to Know."

The brotherly competition between the Andersons continued in their mashup of "Hungry Like The Wolf/Rio," both by Duran Duran. A winded Bomer put his arm around Criss and whispered, "I was really great in that number!" The actor told TV Guide that he and his brother shared a room growing up and they actually used to listen to Duran Duran tapes just before bedtime.

The song first appeared in the film of the same title and has since been covered by the likes of Frank Sinatra and Nat King Cole. In a 2010 episode of White Collar, Bomer's character Neal Caffrey samg the track a cappella while drugged.

4. "It Only Takes A Moment," Jerry Herman

Bomer and Kelli O'Hara, a Broadway actress known for roles in The Pajama Game and The King and I, performed "It Only Takes A Moment" from the Tony-winning Hello, Dolly! at the 33rd Kennedy Center Honors in 2010. The ceremony honored composer Jerry Herman, as well as others including Oprah Winfrey and Paul McCartney.

Whether it's Broadway standards or the pop hits of yesterday, Bomer clearly has quite a voice. Between that chiseled jaw (let's be real, Bryce Larkin was the reason we all watched Chuck), those awesome stripping routines, and an incredible acting range (he also recently appeared in the HBO drama The Normal Heart, which earned him a Golden Globe for Best Supporting Actor), he's the surprise star of Magic Mike XXL, a film already filled with its share of big names and bigger moves.