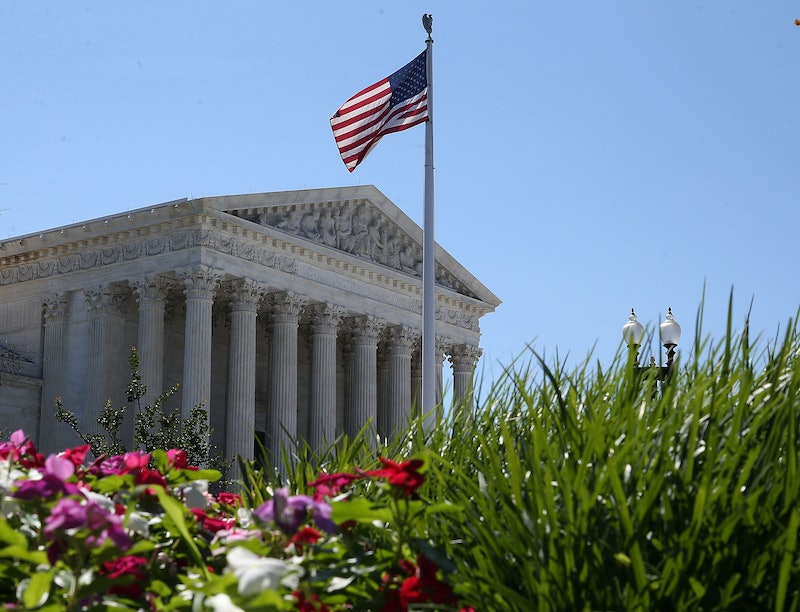 This week, the Supreme Court delivered major victories for healthcare and same-sex marriage, but the environment wasn't as lucky. On Monday, SCOTUS blocked restrictions on power plant pollutants drafted by the Environmental Protection Agency (EPA). The new regulations, first announced last June, aimed to limit coal-fired power plants' emissions of mercury and other toxic pollutants by 30 percent by 2030. It was going to be the Obama administration's most aggressive climate change initiative — until the Court ruled that the regulation was illegal, saying it violated the Clean Air Act by failing to account for how much it would cost for the industry to adapt to the rules. SCOTUS' decision allows the coal industry to continue running the show and stops beneficial climate change work from actually happening.

The Clean Air Act requires that EPA controls be "appropriate and necessary," and SCOTUS decided these weren't because the EPA didn't factor in a cost-benefit analysis. The industry groups fighting the new regulations argued that it would cost them $9.6 million each year to lower pollutants for only $6 million in benefits, while the EPA said the benefits would be closer to tens of billions of dollars. The "benefits" being debated were the health of the environment and the public, which is pretty hard to put a price tag on. Essentially, SCOTUS determined that restrictions meant to drastically improve Americans' health and the condition of the Earth are not appropriate or necessary. It's a good thing they saved Obamacare earlier in the week, because we're going to be needing it.

This decision will have a detrimental effect on climate change work. It sets the standard for what's "appropriate and necessary" very high, making it even more difficult for the EPA to do its job. If it couldn't successfully be argued that the health of Americans and the planet is a priority in this case, it's not likely to become a priority any time soon. After six and a half years in office, President Obama finally pushed through regulations that would cut back on toxic pollutants and they were blocked by the Court. These restrictions weren't that extreme, as they only applied to coal-fired plants and wanted a 30 percent decrease in certain pollutants from 2005 levels by 2030 — that's a long time for the industry to adjust and a reasonable margin to do so.

This plan was not only going to push America's climate change efforts forward, but also the world's — it was meant to make the U.S. an example for the rest of the world before the World Climate Summit in December. How can we ask China and other countries to pollute less when we can't do so ourselves? Blocking the EPA's power plant regulations effectively blocked climate change progress.