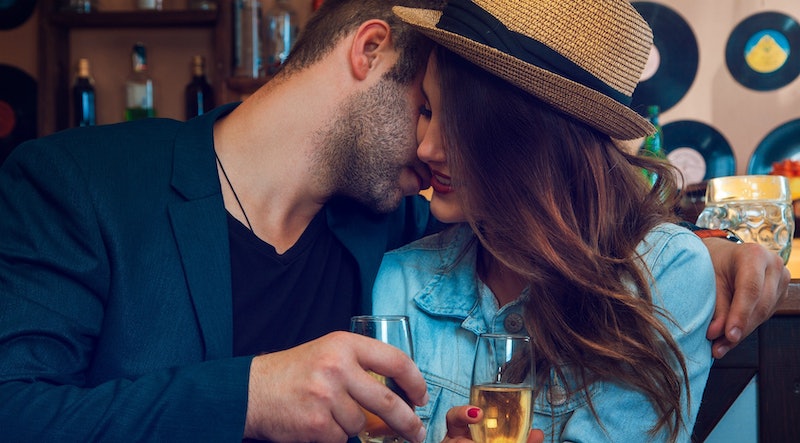 While we already know that sexual harassment in the human world sucks, a new study has found that in the animal kingdom, it’s also not making ladies feel any better about themselves. The study by The University of Queensland’s School of Biological Sciences has found that when male fruit flies give too much sexual attention to female fruit flies, it's harmful. It totally distracts them, disrupting their ability to basically make their way in the world. The attention that these sexually attractive female flies get (yes, flies can be sexually attractive!), is so overwhelming that they can’t even function… which sounds very similar to what sexual harassment can do to human females, too.

As the study found, female fruit flies with “superior genes” spend so much time fending off dude flies, that they can’t even get down to the business of laying eggs. Because of this, those “superior” genes aren't getting a chance to be spread onto further generations therefore making fruit flies even more annoying and seemingly useless as ever. The male fruit flies may think they’re doing the female fruit flies a favor by prancing around telling them how hot they are, but they’re having the opposite effect.

In some ways we can’t fault the flies, because they are just flies, but the study is proof that sexual attraction, whether it’s between insects or humans, is an interesting thing over which we have little to no control.

Ever wondered why you’re sexually attracted to the person you are or why you just can’t seem to bring yourself to want to have sex with that super hot guy in your office that everyone else thinks is delicious? Well, here are five things to know about sexual attraction.

1. We’re Sexually Attracted To People Who Remind Us Of Our Parents

While this, in no way means you’re even remotely sexually attracted to your mom and dad, it does show that we’re drawn to what is familiar to us. Studies have found that the caregivers we have early in life shape our attraction to people later on.

2. We’re Sexually Attracted To Those Who Look Like Us

Although being into himself may have drowned Narcissus, being sexually attracted to people who look like us is actually a thing.

A 2010 study found that, in addition to being drawn to those who resemble family members, we also prefer our looks to those of strangers. During three experiments, participants were given photos of strangers, photos of strangers morphed with photos of themselves, and subliminal photos of their parent of the opposite gender as them. The results were that the photos containing morphed images of the participants’ own faces where the ones deemed most sexually attractive. So… Narcissus wasn’t completely weird in his adoration for himself.

If you’ve ever found that you’re super attracted to a certain person for a few days, then it immediately dies a week later, it’s just your hormones messing with you… and looking for your ideal match.

Research has found that not only do women fall in and out of sexual attraction over the course of their menstrual cycle, but when they're most fertile their sexual attraction for manly men goes into overdrive. It’s at that point that men with deep voices and furry faces really score when it comes to ladies. But then it passes, because as a 2010 study found, women only want those manly men while they're fertile and not for the long term. Basically, women want to have make babies with Thor, but marry the soft, sensitive, poet type.

While women may see a fluctuation in their sexual attraction for others over the course of a month, men see it on more of a seasonal basis.

A 2013 study of 114 heterosexual men between 16 and 53 found that while attraction to a women’s faces didn’t change so much over a year’s time, it was in the winter months that men’s interest started to pique in regards to bodies. Despite the thought that men’s attraction for women’s bodies goes up several notches during the spring and summer, the study found that in the winter men found themselves more sexually attracted to women’s bodies and breasts than any other time of year.

5. The Pill Has A Major Effect On Sexual Attraction

According to a 2014 study, the Pill can have such a major effect on women’s hormones that if she gets off the Pill mid-relationship, she can stop being sexually attracted to her partner. This is especially the case if a woman was in a relationship with a man who was below the conventional standard of handsome. Conventionally good-looking guys don’t have to worry so much.