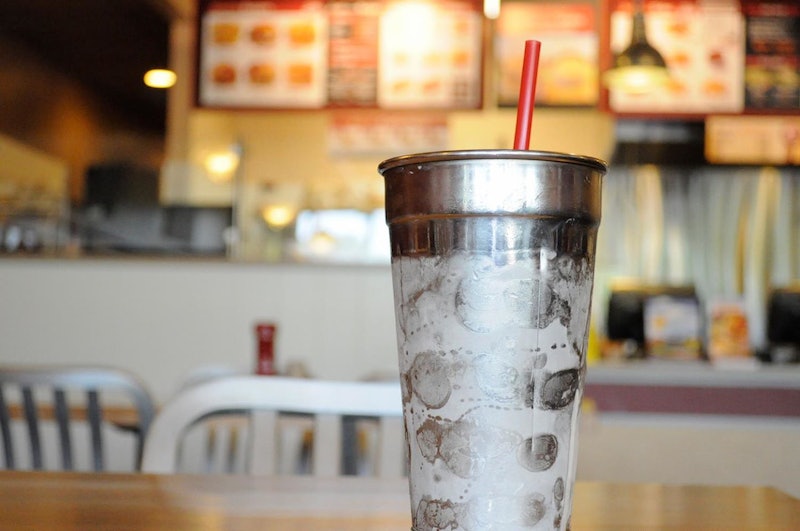 There's been a lot of talk recently about how eating bugs might be the answer to food insecurity, but they're still a relatively uncommon sight on menus. Well, one fast food joint it taking a big step in the direction of bug-normalizing us: Burger chain Wayback Burgers has a cricket milkshake on the menu now. The limited-edition release comes in the flavor Oreo Mud Pie, and it's made with Peruvian chocolate cricket powder. Fun fact: Peruvian chocolate cricket powder is a thing. Who knew, right?

Interestingly the whole cricket milkshake thing started out as an April Fool's Day prank that the burger chain played on its customers via social media. When people started to react positively to the idea, however, Wayback decided to give it a shot. The current milkshake recipe is a result of testing between 20 and 30 different flavored cricket powders; the powder adds protein to the shake, so it's just like a buggier form of the stuff athletes stir into their drinks so they can bulk up. For the curious, here's what Wayback's April Fool's Day prank looked like:

The biggest hurdle that the shake will face, according to Wayback, is getting people to try it. Consumer attitude is the number one reason that the bug revolution hasn't really taken off yet: Despite all the ringing endorsements from environmental activists and physicians, people can't really get over the fact that eating bugs just feels kind of gross.

Is this attitude hurting us? Many people say yes, arguing that eating bugs is a smart move economically, encironmentally, and nutritionally. Our preconceived notions of bugs as "dirty" and "gross" could be costing us the chance to eat healthful food that provides us with serious bang for our buck.

Still not convinced? I'll be honest: I'm not either. Talk to me about protein and environmentalism all day and I'll nod my head and be impressed with your commitment to the bug-eating lifestyle, and then I'll go home and shower and try to get the image of bugs crawling in my stomach out of my mind. I want to be open minded about it, though, so I've come up with a list of pros and cons about bug-eating. I'm still on the fence, but maybe it'll help you decide.

Bugs are really good for you. They're high in protein and low in fat, and eating them doesn't put you at risk for salmonella or mad cow disease the way that eating meat does.

They're actually really expensive. Dutch farmers who raise bugs for human consumption say that factoring in the manual labor costs, bugs will be about as expensive as nice beef.

Bug farming is sustainable. So that's good, raising bugs doesn't mean the total and immediate distraction of our world.

They're not vegetarian. I guess this is only a con if you're a vegetarian.

Bug eating is trendy, so if you're into being on the cusp of food trends this is probably the call.

I mean... They're still creepy crawly bugs. Just deal with that for a moment.