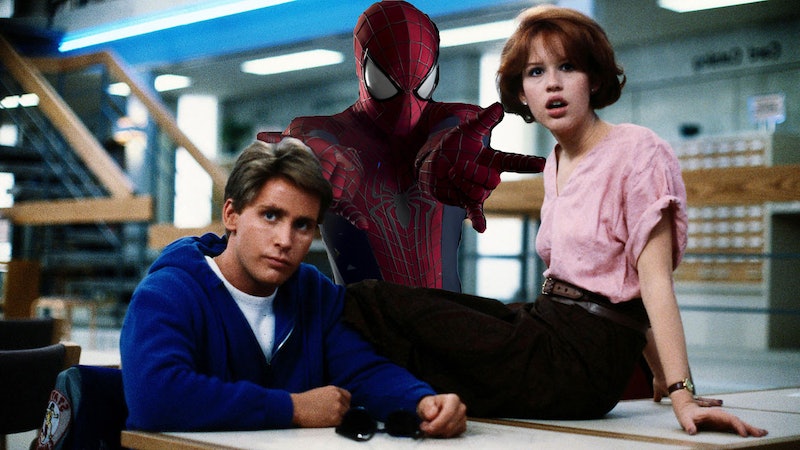 There's been a bit of uneasiness with the dawn of yet another Spider-Man reboot, with Tom Holland recently cast as Peter Parker and rumblings that it maybe should've been Donald Glover instead of another white actor. But despite the ongoing debate, there is a glimmer of hope that this Spider-Man movie has potential. According to a Birth.Movies.Death interview with Marvel Studios president Kevin Feige, Spider-Man will be a high school soap opera in the vein of John Hughes movies. Can you imagine how amazing that would be?

...OK, maybe that doesn't entirely eclipse the lack-of-diversity debate, but it's a welcome twist on the Spider-Man films. Both the original Tobey Maguire trilogy and the more recent Andrew Garfield films featured glimpses of Peter in a high school setting, navigating his powers awkwardly, occasionally against Joe Manganiello. But very quickly they would segway to Peter's college life as he takes on New York City. Focusing on a very teenage Peter Parker, especially with a Hughes-inspired feel, sounds really fun... and it almost makes me wish Hughes would come back to life and direct the movie himself.

But since I have my doubts it'll happen, let's just imagine a world where Spider-man was a Hughes-directed 1980s film, shall we? For example...

Peter's weird science experiments would be set to a very pro-Oingo Boingo soundtrack.

Likewise every dark tragedy that happens at Oscorp — getting infected with mutant spider DNA, tentacle arms fusing to your body and killing your wife — will be a fun, wacky, new adventure! Viva la nerds!

Mary Jane Watson would obviously be played by Molly Ringwald.

She already has the perfect hair for a 1985 variant of MJ, so think something along the lines of a kinder Claire Standish from The Breakfast Club. Embrace the outcast, Mary Jane, you know that's what the heart wants.

And obviously Gwen Stacy would be played by Jon Cryer.

If only Peter would just see through him/her and realize that she/he isn't just his creepily obsessive best friend, he/she is his dream girl/boy/person! Spoiler: it only works out that way in the alternate ending.

Flash would be the rich kid '80s bully that we've all groaned at during copious rewatches of the genre.

He would also be renamed Chad and have a feathered quaff that's to die for.

Harry would have all the parental-inspired anxiety of Ferris Bueller's BFF Cameron.

To be fair, Harry has a lot more to be freaked out about considering his dad is the head of a powerful organization slash a screen-stealing super villain.

The eventual Spider-Man/Avengers spin-off would be about everyone negotiating their drama in detention.

Molly Ringwald would be re-cast as Black Widow here, which won't be at all amusing. The best part is when Tony Stark really opens up to the rest of the group, "You know what I got for Christmas? Oh, it was a banner year for the Stark family. A multi-billion dollar company. Because we're loaded."

And of course, Peter's adventures wouldn't end with the usual funerals and inner-conflicts about keeping his identity a secret. It would end with him winning the girl and triumphant fist-pumping.

Face it, tiger, you hit the jackpot.