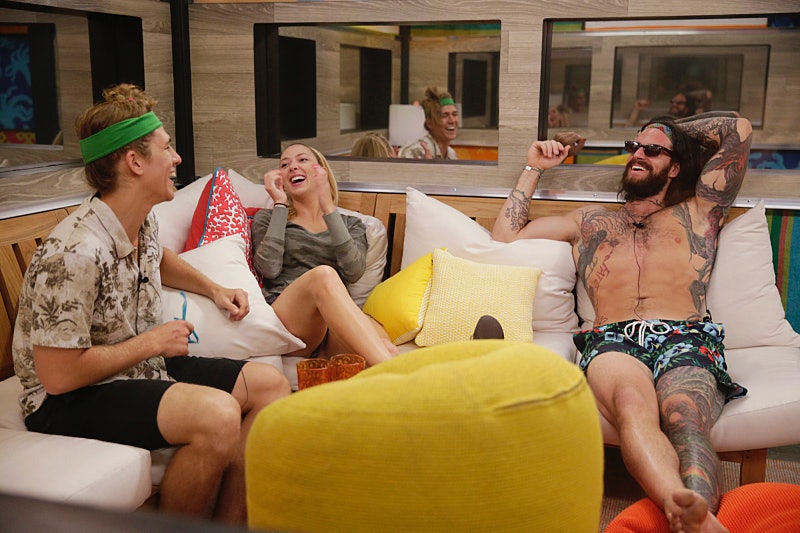 It’s only two weeks into Big Brother 17 and already the conspiracy and game theories are beginning to pour out. Just to add to the mix, here’s one of mine: You know that twin twist thing Big Brother is doing this season, where one of the players has a twin that is constantly tagging in and out of the house with their sibling? Well, I think they’re ALL twins. Yep. All fourteen of them. I mean, sure. That would be super hard to pull off from a production standpoint, but as the rumors are starting to pick up speed, it seems like more and more of the house guests have twins that they are hiding.

Think about how, on the first episode, Shelli announced that she is a twin. Granted, her twin is a dude and that would be really hard to do, it’s still weird that she also has a twin, don’t you think? On a season where the big unexpected twist is a twin twist, Shelli just happens to have a twin? That seems too convenient to be coincidence.

And then there is Liz, who has a twin, Julie. And while this might appear to be the obvious answer (and serious spoiler for Season 17 if she is the subject of the twist), there are some really weird things happening on the live feed that might point to even more twin twists. So let’s start a running tally of who it’s been said might have a twin, shall we?

Has a fraternal twin brother. Probably not involved with the Twin Twist, but WHO KNOWS.

Twin sister Julie has been confirmed via Instagram. She totally could be the one, although they do look pretty different in this picture.

Jeff apparently mentioned on night one of the live feed that he has a twin. Really? Another one?

Da'vonne is right: that dude is SO NOT a dentist. I don’t care if his intro showed him in a doctor’s office. But it would make sense if John, the dentist, was the calm guy we see most of the time in the house, and John, that weird guy we see in the Diary Room, was his twin brother. Now that’s a theory I can get behind, because otherwise I do NOT get that dude.

On the live feeds, Becky seemed to have no idea what the guys were talking about when they mentioned taking stock swimsuit photos for the show even though she TOTALLY TOOK A STOCK SWIMSUIT PHOTO FOR THE SHOW. Either that girl is still feeling the effects of having been hit by a train, or that was her twin in there, who was not a part of the original photo shoot.

It’s a long shot, but that break down of hers on the first night was either really strategic game play or totally out of character. So maybe it wasn’t her at all? Maybe it was her twin sister, unable to hold up under the pressure?

OK, so that’s almost half of the house now under suspicion of having a twin. Ten bucks says that number keeps growing as the weeks go by. And just in case week five arrives and everyone left in the house reveals their identical twin, you heard it here first.

More like this
When Was 'Bling Empire' Season 2 Filmed?
By Alyssa Lapid
Gillian Teased A Surprising Ending In 'Temptation Island' Season 4
By Kadin Burnett
Everything To Know About 'RHONJ' Season 13
By Brad Witter
Will ‘Bling Empire’ Return For Season 3? Here’s What To Know So Far
By Kadin Burnett
Get Even More From Bustle — Sign Up For The Newsletter