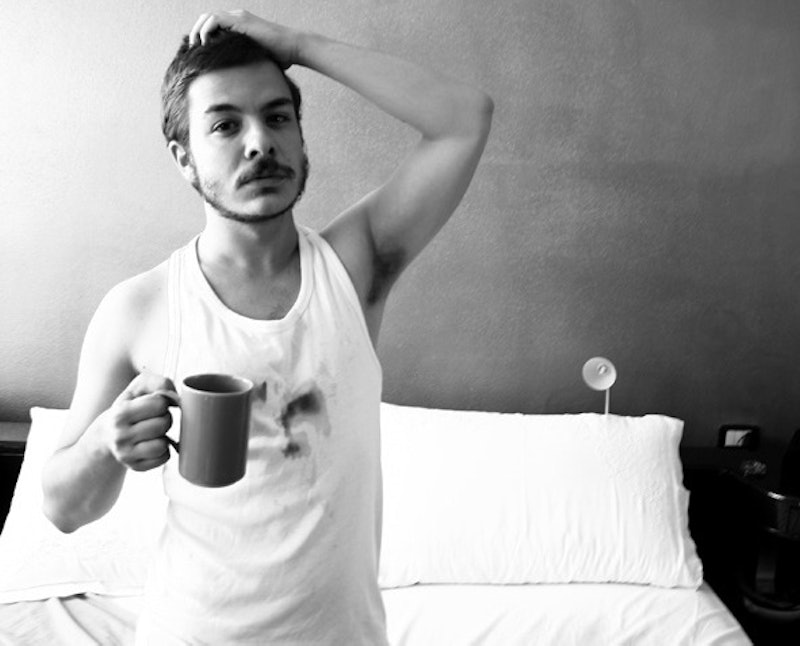 The first time I enter a guy's apartment I can't help but take mental pictures, analyzing the decor, checking the furniture, and noting whether his level of messiness is charming or just straight up gross. Guys are of course doing the exact same thing when they visit our abodes, and if you need any evidence, look no further than a recent Reddit thread expounding upon the things men don't like about women's homes.

Of the many gripes from gents, the top ones include inadequate entertainment systems, excessive throw pillows, and towering stacks of women's magazines — which is weird because those mostly include blow job tips, which guys should technically be into, no? The contents of a lady's fridge also seems to be important, which is probably why my ice box of seltzer, last night's takeout and baking soda doesn't do me any favors.

Although I'm the last person to think that gender dictates how you decorate, there are a few consistencies when it comes to dudes which I have seen so often I cannot deny. Here are the five worst things about guys' apartments. Count yourself lucky if you have never encountered any of these:

1. Stuff From His Ex, Hanging Around

Everyone has a past, but some guys seem to purposefully leave their ex's stuff around their place even years after they've split up. Did he think you wouldn't notice that box of papers, stray thong, and extra toothbrush with the long hair in it? I once dated a guy who had a collection of glittery hair ties he kept from former lady friends that he gave his cat to play with. Creepy.

2. No Art/Posters/Anything On The Walls

How can you spend over a thousand dollars on your entertainment system but not have anything on your walls? Are you a squatter or is this really your apartment? Maybe you're a serial killer? Seriously, when there's no personal touches it's downright creepy, and yet, it's something I've seen far more often than I'd like to admit.

3. The Ring Of Scum In The Sink/Toilet/Bathtub

As a messy woman, I can't say this is only guys, but there are far fewer women who are allergic to cleaning, in my experience. Even if a man does keep things moderately tidy, you'll always know if he's truly got it together if he cleans his bathroom. Check for that ring of scum in the sink/toilet/shower for the cold, hard truth.

4. Using A Futon Or Air Mattress As A Bed

No, I don't want to do it on your futon or air mattress (but if you have a race car bed, hit me up pls). Seriously though, we're not in a dorm, and this sad excuse for a bed speaks volumes about where you're willing to cut corners in your life, and how much time you think you'll be spending in said bed. However, you are excused if you a.) just moved b.) just got divorced or c.) are really really ridiculously good looking.

Again, if you're going to spend a lot of time in bed with some guy, the least he can do is not have sheets so rough you get rug burn. (The struggle is real, and it is not cute.) I'm not saying it has to be 1000 thread count or something sleazy like satin (although that's kinda hot in an American Gigolo kinda way), but can it at least be somewhat nice to slide into?

More like this
The 6 Best Closet Dehumidifiers On Amazon
By Sharon Brandwein
Is The Stanley Adventure Quencher Worth The Hype?
By Alexis Morillo
11 Key Questions People Never Think To Ask On An Apartment Tour
By Anna Davies
6 Storage Hacks To Eliminate Clutter, According To Experts
By Allie Volpe
Get Even More From Bustle — Sign Up For The Newsletter