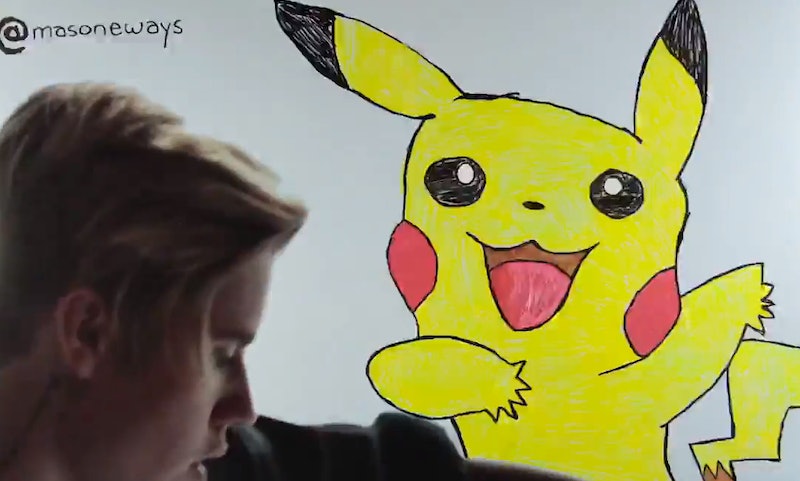 Monday morning, the music video for Skrillex, Diplo, and Justin Bieber jam "Where Are Ü Now" umlauted its way on the Internet. The clip features a time-lapse slideshow of fan-sourced scribbles and sketches, and said slideshow is superimposed on a singing and dancing J-Biebs. Out of the three gazillion (rough estimate) drawings that made it into the vid, there is one drawing in particular that grabbed my attention by the shirt collar and refused to let go: Pikachu. At the 1:57 mark of the video, Twitter user @masoneways’s rendering of the Pokémon character pops up behind the Biebs. The image has since made a nest in my brain. And now I'm dying to find out the meaning behind the Pikachu cameo.

"Wait, why are you reading into this? It's probably nothing more than a random doodle, Kristie," you say. "It doesn't have to 'mean' something."

My rebuttal to that: Ugh, LAME. I think it'd be fun if the Pikachu in this video meant something, so I'm going to go ahead and assume it means something. (Did you feel the temperature drop just now? My ice cold argumentation skills are to blame. Seven years on the speech and debate team really paid off.)

OK, now that we've cleared that up, let us get to the theorizing! What does that Pikachu in the "Where Are Ü Now" music video mean?

The pairing of Pikachu and Bieber brings to mind another human/Pocket Monster duo: Ash Ketchum and Pikachu.

For starters, both can rock a big baseball cap.

REASONABLE THEORY #2: "Naturally" is about Pikachu

Here are some of Pikachu’s moves: Thunder Shock, Thunderbolt, and Thunder Earthquake. Notice a trend?

When I see the words "thunder" and "Bieber," I begin humming this song by Selena Gomez and the Scene:

Why in the name of Professor Oak am I singing a five year old track by Biebs's ex-girlfriend? Because of a lyric, duh: “You are the thunder and I am the lightning."

Who is the thunder? Might it be, oh, I don't know, PIKACHU? What if Selena has been singing about Pikachu this whole time?

REASONABLE THEORY #3: It's a shoutout to the Pikachu Song

While we're on the subject of Pikachu and music, here's the Pikachu Song:

If Pikachu in the "Where Are Ü Now" vid's goal was to get the Pikachu Song stuck in my head for the rest of the day, it succeeded with flying colors.

More like this
Justin & Hailey Bieber's Bond Is "Unbreakable" Amid His Ramsay Hunt Diagnosis
By Bustle Editors
Christina Aguilera Had A Mini "Lady Marmalade" Reunion With Mya At LA Pride
By Jake Viswanath
“The Door Is Always Open” For Another 'Breaking Bad' Spin-Off, Says AMC Boss
By El Hunt
Lauren Rae Is Bringing Back The Sex And The City Vibes In Her New Memoir
By Shahed Ezaydi
Get Even More From Bustle — Sign Up For The Newsletter