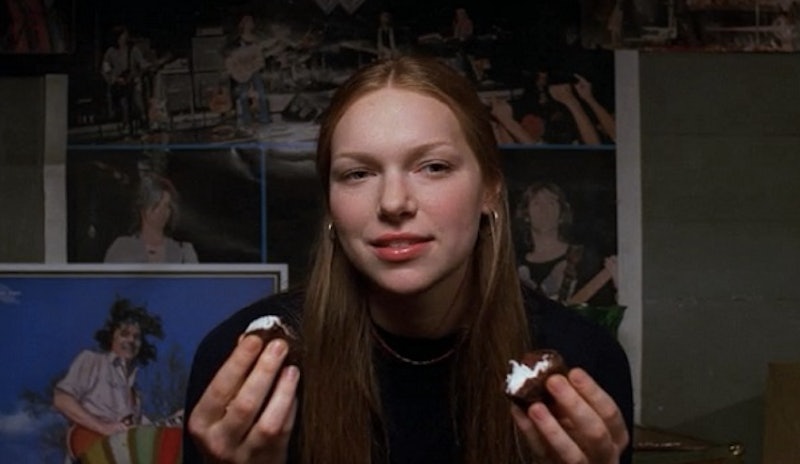 For most of my early teens, That '70s Show was IT. When the show premiered in 1998, Ever After had just come out, Bruce Willis was saving the planet in Armageddon, and dELiA*s was the epitome of ~casual fashion~. That '70s Show quickly became one of America's favorite sitcoms and introduced us to a group of teenagers living in Point Place, Wisconsin and dealing with the quickly changing social issues of the decade. When I was a 13-year-old hopelessly in love with Ashton Kutcher's hot but clueless Michael Kelso, it was easy for me to miss some references that I get now, like the fact that Laura Prepon's character Donna Pinciotti was a feminist queen.

Donna was the quintessential representation of the rapidly changing views on women and their place in society. In contrast to Mila Kunis' ditzy Jackie, Donna was strong, outspoken and often alluded to as being "too masculine." But in spite of all that, she remained an object of many of the guys' desire throughout the series, just by continuing to be the powerful woman she was.

In that spirit, I gathered some of Donna Pinciotti's best feminist one-liners throughout That '70s Show's run, to give you reason to love her all over again.

1. When She Stated Her Opinion On Women Going To College

When Kelso told her, "College is for ugly girls who can't get modeling contracts," she bit back, "No, college is for women who don't want to marry the first idiot they meet and squeeze out his bastard moron children."

2. When She Didn't Want To Be A Baby Machine

3. When She Was Literally A Strong Woman

She jokingly nudged Hyde off a ledge and said, "I am stronger than all the guys I hang out with." That's thanks to her JV wrestling days.

4. When She Didn't Agree With Her Mom

Her mom was a "beginner" feminist after taking some classes, but Donna didn't agree when Midge told her that sometimes a lady should act weak to make the man feel superior. Donna told her mom, "That's insane! If women don't learn to stand up for themselves then men will always control the world."

5. When She Was More Than Her Looks

Donna angrily told her boyfriend, "Eric, just because a guy pays attention to me does not mean he wants to get me naked!"

6. When She Told Eric She Did All The Work

They were about to get very, ahem, busy, when Eric told her, "I'm just going to have to warn you, I'm exhausted, so you're going to have to do all the work." Donna replied, "Why should today be any different?"

More like this
Yes, Billboard Queen Angelyne Really Ran For Governor Of California
By Brad Witter
50 Years After Creating Her Alter Ego, Angelyne Is Still Driving That Pink Convertible
By Gretchen Smail
Laura Dern Said “Cultural Awareness” Made Her Rethink This 'Jurassic Park' Fact
By Grace Wehniainen
The New Monster In 'Stranger Things 4' Might Be The Creepiest One Yet
By Gretchen Smail
Get Even More From Bustle — Sign Up For The Newsletter