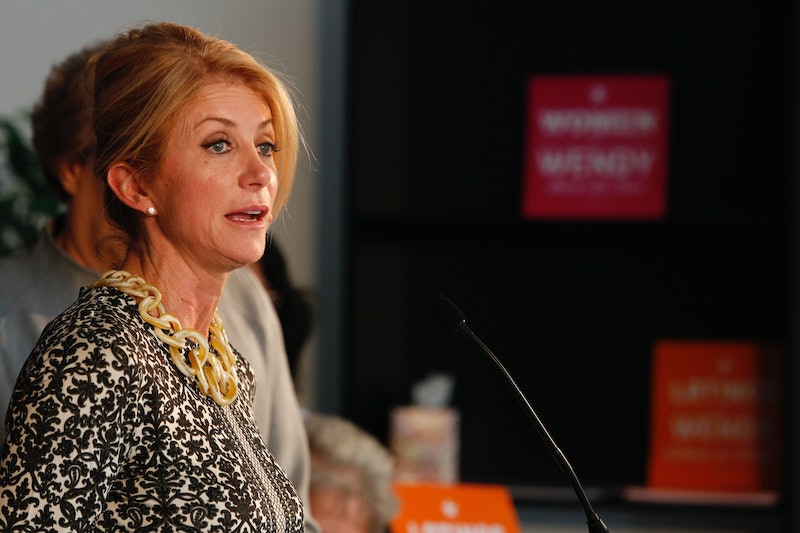 In a 5-4 order handed down Monday, the Supreme Court temporarily blocked Texas' anti-abortion restrictions that would have put almost every clinic in the state in jeopardy. The move allows those clinics to remain open, at least for now. The restrictions at stake insist that all abortions take place in an expensive hospital-like setting, which most of the clinics in the state cannot provide. Whole Women's Health, which petitioned the Supreme Court alongside other activists to curb these restrictions, is effectively victorious — albeit temporarily — against the slow death of reproductive right in Texas. Those restrictions are part of the much-debated 2013 bill HB2, which was upheld by an appeals court earlier this month. On July 1, the clinics that did not provide this hospital-like setting would have been forced to close immediately.

The short order, given by the justices on the last day of the term, reads in part, "The application for stay presented to Justice Scalia and by him referred to the Court is granted, and the issuance of the mandate of the United States Court of Appeals for the Fifth Circuit in case No. 14-50928 is stayed." However, Scalia was against the order, along with Chief Justice John Roberts, Justice Clarence Thomas, and Justice Samuel Alito.

So, how long will the clinics be able to stay open — the only clinics that are reasonable distance away from the homes of almost a million Texas women? Well, the Supreme Court's order of a stay will be in place until the justices decide once and for all whether to take up the abortion activists' case, which won't come until the Supreme Court's next term. So, at the very least, Texas can count on having a handful of abortion clinics still open this summer.

In a statement, Whole Women's Health president Amy Hagstrom Miller said: "Today I breathe a deep sigh of relief as the the Supreme Court of the United States protected our three reproductive health clinics in West Texas and the Rio Grande Valley from shutting their doors by partially blocking components of Texas' omnibus anti-choice law, HB2 ... We are emboldened by the Court’s decision, but know that this fight is far from over. We will continue to stand with the women of Texas to ensure they have access to affordable abortion care when they need it."