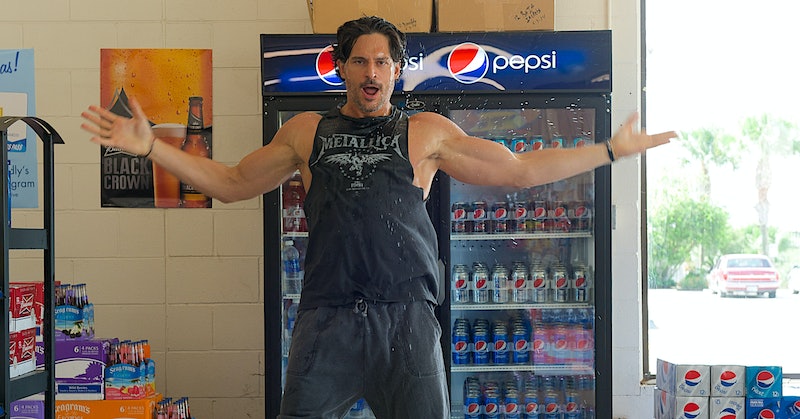 Everything was going as planned on the set of Magic Mike XXL... until it wasn't. "We rehearsed and rehearsed and rehearsed and rehearsed, but then my dance partner did something unrehearsed," says the film's star Joe Manganiello, who plays male stripper Big Dick Richie in the first and second films. "And the result was me hearing a loud rip and pop. It was my bicep." And for a summer sequel surrounding strippers performing unthinkable stunts with their muscled bodies, the loss of a bicep is crushing.

In this particular scene, the 38-year-old propels himself onto a sex swing holding a lucky (or unlucky, depending how you feel about sex swings) member of the audience. With Nine Inch Nails sultry tune "Closer" as the backdrop for the physical performance, we see the Pittsburgh native dance on and around the contraption. It's an impressive feat, and one that's sure to leave your mouth agape. But the Christian Grey-esque sequence almost didn't make it into the film after the actor's injury. When the crew suggested they postpone filming until he had recovered, the seasoned actor knew it would be impossible. "There's no way," he says. "Tomorrow my arm's not gonna move. We gotta go now."

"It was right out of Rocky," co-star Channing Tatum interjects. "He was like 'I got this! Just pop it back in! Let's go!'"

Despite the blow to his bicep, Manganiello insisted that the show must go on, and they continued filming for the next four and a half hours. While many lustful moviegoers will thank the True Blood actor for his selfless act, fiance Sofia Vergara was less than thrilled about the decision. "Sofia was there that day," he admits. "We got back to my trailer and, as soon as the door closed, she said, 'If I see you at the gym tomorrow, we're done!' 'I'm going to leave you! That's it!'"