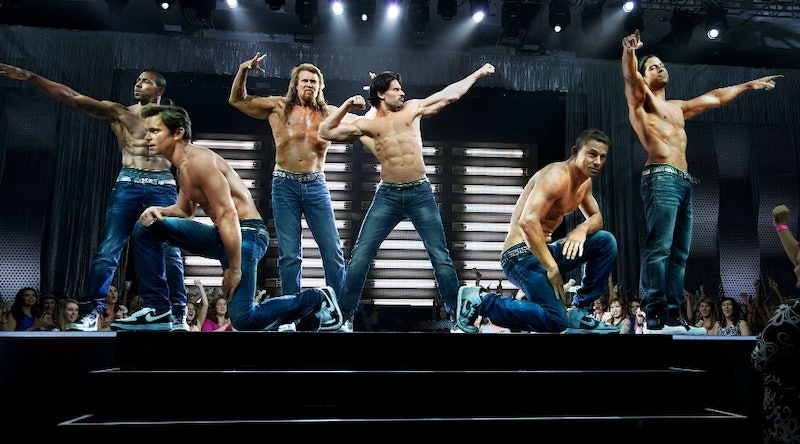 If you're anything like me, seeing the Magic Mike XXL trailer for the first time was an overwhelming experience, to say the least. There was Channing Tatum in a tank top, Channing Tatum taking off his clothes, Channing Tatum dancing.... it was all so distracting that I almost didn't even notice the song Tatum was dancing to , Ginuwine's R&B hit, "Pony." But how could I have missed it? "Pony" is a '90s classic, remembered fondly for its sexual themes and not-so-subtle lyrics like "if you're horny lets do it, ride it, my pony." And in Magic Mike XXL, the song makes a big comeback; "Pony" is not only featured in the scene shown in the trailer, but is mentioned several times throughout the film.

Of course, as true fans of Tatum's abs know, the song's presence in the second film is only a continuation of its role in the first. In 2012's Magic Mike, the titular character (Tatum) danced to "Pony" as part of a stripping routine that viewers of the movie will likely remember fondly. If you forgot (or if just want an excuse to watch the actor display his moves again), here's how the original scene went down:

And just for good measure, here's a clip of its revival in Magic Mike XXL:

Try getting that out of your head for the next few days. Thanks to the July 1 sequel, "Pony" is having a moment, but let's be honest — the song has never really gone away. A few of its recent appearances in movies and TV:

On Parks and Rec's Season 6 finale last year, Ginuwine, apparently a cousin of Donna's appeared as himself at the Unity Concert the Parks Department was hosting to benefit the city and honor the passing of Li'l Sebastian. He sang "Pony," of course, because what better song is there to pay tribute to a beloved fallen horse?

The series finale of Glee, which aired in March, featured flashbacks to the club members' auditions back at the beginning of high school. Artie won his spot by performing a rendition of "Pony" that had Mr. Schuester clapping by the end.

Ginuwine's song made an appearance in last August's Let's Be Cops. The scene is unavailable to watch online, but if you check out the movie's trailer, you can probably get a good sense of how it was used.

Even animated TV shows have gotten in on the "Pony" fun. On a 2011 episode of American Dad!, Steve and his friends danced along to the song, but as you'll see, they took the lyrics a bit too literally.

In the 2007 comedy about four men on a road trip, a carnival employed a very enthusiastic singer who counted "Pony" as part of his repertoire. He then went right into "Don't Cha," so clearly, it was a medley full of dance-ready hits.

As these movies and shows have shown, "Pony" is nothing less than an American classic, and Magic Mike XXL will surely make it even more of a staple in soundtracks and playlists for years to come.