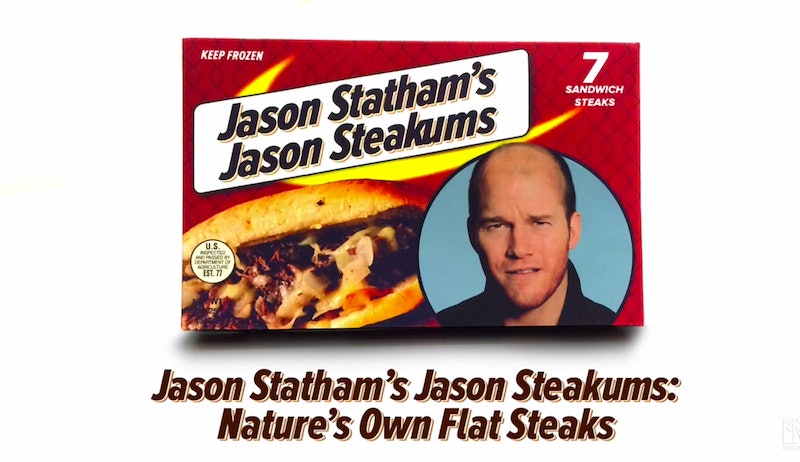 Chris Pratt just might be the most famous person on the planet considering Jurassic World had the biggest international box office opening in the history of film. So when Saturday Night Live decides to release an un-aired sketch starring the mega action star, it's kind of a big deal. On Monday afternoon, "Jason Statham's Jason Steakums" was posted online and became an instant viral success. Pratt hosted Saturday Night Live back in September for the monumentous premiere of its 40th season. The "He-Man and Lion-O" and "Marvel Movie Trailer" sketches were big fan favorites, and if "Jason Statham's Jason Steakums" hadn't been cut for time, it probably would have been a highlight of the episode.

In the sketch, Pratt dons a bald cap and tough action man leather jacket as well as a quasi-cockney accent. He's got Statham's serious demeanor and sexy sneer down to a tee. Jason Statham's Jason Steakums could have easily become one of SNL's famous parody products right up there with "Oops I Crapped My Pants," "Mom Jeans," and "Schmitt's Gay". Though the sketch never aired on NBC, the lords of the Internet have graced us with more Chris Pratt being Chris Pratt and doing funny things while being Chris Pratt.

The product itself is pretty bizarre and I have puh-lenty of questions about it. but first, take a look at the clip: