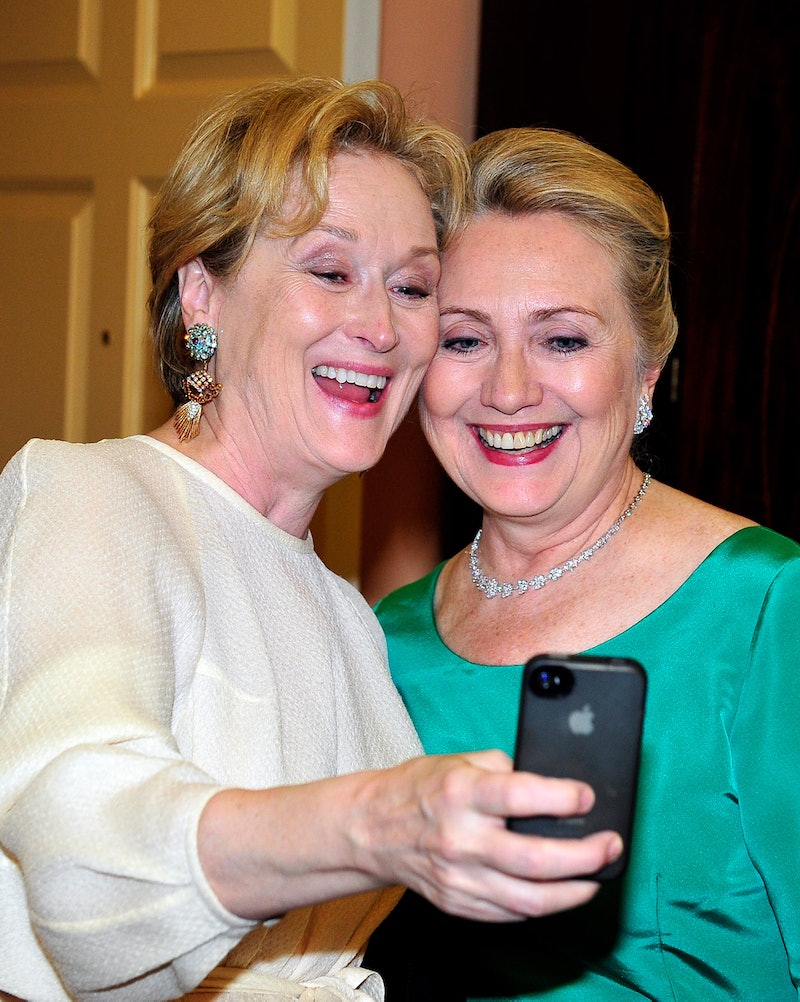 In the name of full transparency, I would like to A) evoke the first-person as often as possible in this piece, and B) admit that this is the story I was born to write. Yes, yes, I know. I get to cover a full spectrum of women's rights issues from reproductive legislation to the launching of a female presidential candidacy. But the woman who taught me everything that my baby feminist eyes and ears first encountered is the same woman our country knows and loves as 19-time Academy Award nominee Meryl Streep. When it comes to the political arena, Streep absolutely belongs in the conversation. In fact, she has helped start many conversations that have sparked real activism and action in this country. Not that it's easy to count, but there are so many ways Meryl Streep has helped make political change.

It's probably best to start with the 2015 Academy Awards, during which Streep became Patricia Arquette's No. 1 cheerleader (recruiting J-Lo along with her) when the Boyhood actress spoke out for equal pay for women during her Oscar acceptance speech. We all saw Streep stand up, hoop, holler, and give Arquette a "You go, girrrl!" and immediately grew very, very jealous of Arquette's sudden golden fan club. OK, Arquette made some comments backstage that drove the feminist blogosphere particularly bonkers, but this is a moment we will never forget.

There was also the moment she gave a rousing speech for Hillary Clinton at the 2012 Women in the World Summit in which she told the audience "artillery rhymes with Hillary," and I began to like my name about a billion times more than I ever did.

Not only does Streep know that, according to the White House's calculations, women make 77 cents to what a man makes, she's also called Congress out on their insistence to withhold the Equal Rights Amendment Act from the U.S. Constitution. During the week of her 66th birthday, Queen Streep drafted a letter to every member of Congress, urging them to reintroduce the ERA into the Constitution. She has long identified as an outspoken advocate for women's rights and, according to The New Yorker, even called herself a "rabid man-eating feminist" in a speech for gal pal Emma Thompson (swoon) last year. And she's an all-out humanitarian, too. Here are three causes you might not know had the full-on, official Streep backing.

The Draw The Line Campaign

A long-time representative of equal rights organization Equality Now, Streep has been voice for women's rights across the board. So, it came as no surprise when, in the fall of 2012, the Draw the Line Campaign, which protests stripping women's reproductive rights, looked to Streep as the main authority to stop lawmaker's injustices against women. Cue Sarah Silverman calling in "the big guns."

In the 1990s, Streep starred in a small film called First Do No Harm with the sole aim to raise awareness for the Ketogenic Diet, which is based on a diet of fatty acids to minimize the occurrence of seizures in epileptic children, according to The New York Times. Streep's friend and producer Jim Abrahams and his wife Nancy created a fund called Charlie Foundation to Help Cure Pediatric Epilepsy. Thank you, '90s and modern Meryl Streep, for caring more about making change with each film than making a big paycheck.

If you've taken a look at the National Mall and you have any sense of awareness at all, you will notice that there is no museum dedicated solely to the achievements of women. Streep is on the board for the first-ever National Women's History Museum, and even insisted the movement be featured in a 2011 Vogue feature story about her career. Although the museum is still in its fundraising stages, Streep has stayed on board with the campaign. In the dawn of and following her third Academy Award win, Streep kept the focus on the causes she champions, and this is why we love her.

So, in conclusion, I'm going to go ahead and pitch in my vote for Clinton/Streep 2016. Our country will only be better for it. Also, we could recreate this hug every day, and everything would be beautiful.

More like this
Sandra Bullock, Girlboss Extraordinaire
By Matt Harkins & Viviana Olen
The 'Hocus Pocus' Sequel Finally Has A Release Date & It Makes Total Sense
By Shannon Barbour and Radhika Menon
Harry Styles Called For "Backlash" In Powerful Statement On Abortion Rights
By El Hunt
Spice Girls’ Net Worth: The Richest Member Is Wealthier Than The Rest Combined
By Hugh McIntyre
Get Even More From Bustle — Sign Up For The Newsletter