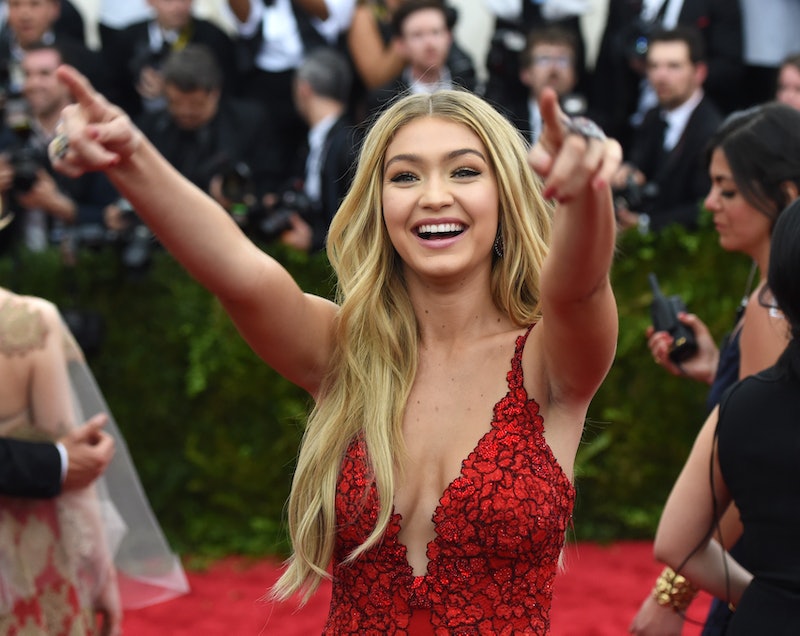 Gigi Hadid's modeling resume continues to grow exponentially, since she, along with Kendall Jenner, is the model of the minute for this generation. Gigi Hadid covers Vogue Brasil for the mag's July 2015 issue and it's mostly a headshot.

Since Hadid is shot from the bust up, all the focus falls on her luscious, thick, golden waves. The shade is softer, warmer, and darker than I am used to seeing on her. It's perf for summer and beyond, actually.

Hadid's hair is blown out into a deep side part, with a tumble of waves sitting on one of her shoulders and framing her face. The cover's stylist wisely balanced out all that hair with a statement, globe-like earring and minimal makeup. Her hazel eyes are also a focal point, played up by her softly matte, nude lipstick.

It's easily one of the model's most gorgeous covers. I am still of the strong opinion that a U.S. Vogue cover can't be too far off for Hadid. She's already done Vogue in Australia and Vogue in Spain. Now she's bagged Brasil, so the U.S. edition must be in her sights, right Anna Wintour?

Hadid's hair is her crowning glory and this isn't the first time that her locks have taken on a life of their own.

The proportions here are flawless. Her brows, her hair, her jewelry, and her makeup are so balanced. Don't you want to ride those waves on a "surfbort?"

Here's a handful of other times that Hadid has rocked a cascade of blonde hair that is everything.

Granted, this blown back 'do comprised of tight, frizzy, and totally '80s curls was worn on the runway. Still, it was memorable.

Hadid loves the one-shoulder look and she should. It works for her because it's glamsual.

Her strands are just as good from the back and while wearing a gold jumpsuit with flared legs.

She went with center-parted waves and was equally va-va-va-voom.

Even with her hair blowing in her face while on a boat, it was still gorgeous and enviable. It must be fun to be able to hide behind your hair like that, all the while living the fabulous life.

Beachy waves of the flawless variety.

Does her hair ever not look awesome?