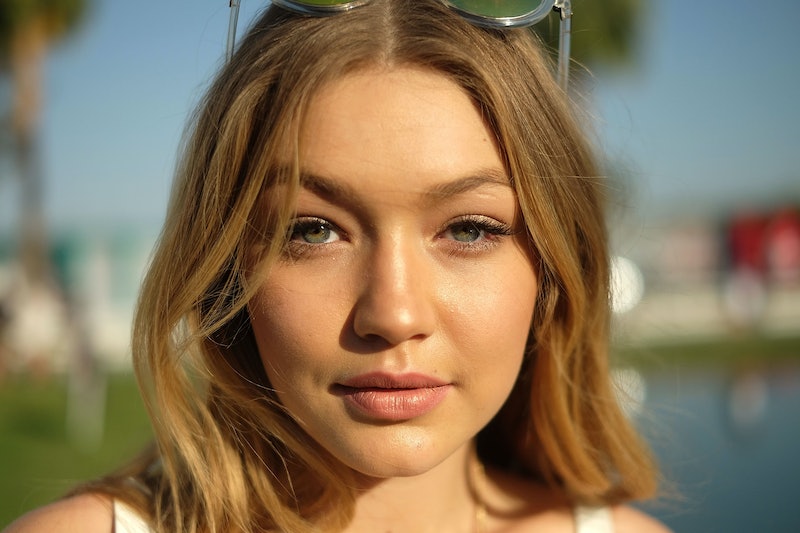 Gigi Hadid is covering Vogue! OK, but cálmate for a second. The hottest-model-this-side-of-Kendall-Jenner is not fronting the U.S. edition of the fashion bible (Karlie Kloss and Taylor Swift have that honor for March 2015). Instead, Gigi Hadid covers the Spanish Vogue 's March issue, looking very '70s with the vintage styling and fur 'n' leather attire. It's an international edition of the magazine, sure, but it's still a huge feather in the budding model's fashion cap, and an impressive "get" for her portfolio, just like her Teen Vogue cover is. Still, I'm pretty confident that she'll eventually be covering the U.S. version — hopefully alongside Kendall Jenner — sooner than later.

It's a bold prediction on paper, but when you think about it, it seems obvious and inevitable.

While Kim Kardsahian's Vogue cover debut in April 2014 was considered a rare "jumping the shark" moment for Anna Wintour, the fashion doyenne did note that sometimes even the venerable Vogue has to cover junk culture. But if Kendall Jenner, a satellite Kardashian, covered the mag, it would be totally different, since she is a legit model with quite a resume at this point. (This is assuming Vogue is only doing two-model covers moving forward, of course.)

So, assuming Vogue is only doing two-model covers after the massive success of Swift x Kloss, something tells me that Wintour would be all about pairing Hadid and Jenner, who are the biggest rising stars in the modeling world. There's safety in numbers, I suppose!

There's Gigi Hadid, draped in leather and fur, in all her '70s glory, for the Spanish version.

But here are four reasons why and how a Hadid x Jenner U.S. Vogue cover would and should happen.

Look at these two! It's totally sweet. Teaming up two strong women in a field that can be perceived as catty is a smart, girl power-esque move.

2. They Are The Future

Hadid and Jenner are the future of the modeling world, even if the haters and critics, like Naomi Campbell, who shaded the Insta-famous generation, aren't happy about it. Vogue has to keep current and reflect reality, as well as dictate fashion trends. Those elements are an important part of striking a balance when you are the fashion mag.

3. They Might Be A Bit Green For Solo Covers... But Together?

Hadid and Jenner are working it. They are fixtures of Fashion Week, nabbing lots of modeling gigs, and doing their level best to prove they are earning their keep, as opposed to being handed jobs because of their reality show connections. Neither is quite ready for (or deserving of) her own solo Vogue cover, but a combo feels appropriate.

4. It Would Be A Fashion Event

Anna Wintour knows that something like this would be a fashion event, one that could expose Vogue to a younger reader, which is something storied makeup brand Estee Lauder understood when hiring Jenner to front their campaigns. People would be tweeting up a storm. I guarantee it.