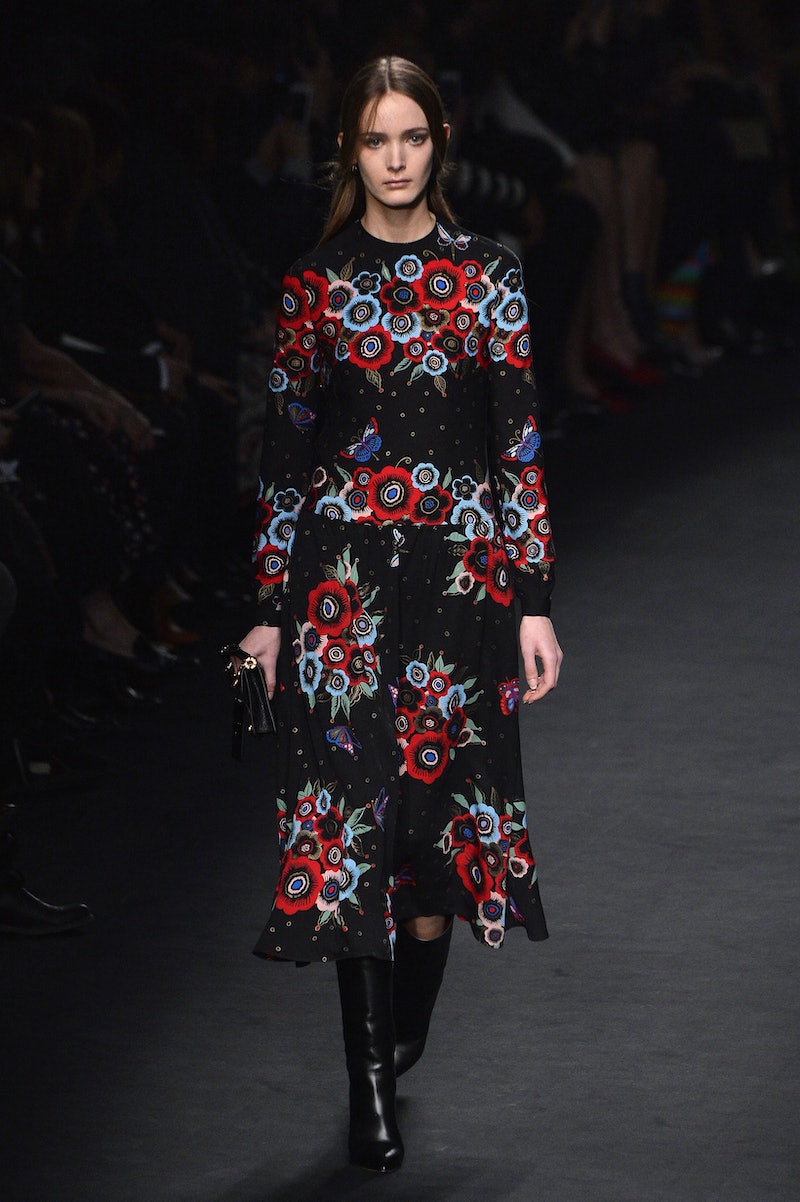 On the heels of March's Dsquared2 cultural appropriation debacle (where the brand was accused of debuting appropriative designs in a collection named after a slur towards Indigenous women), Valentino Resort 2016 used its runway in Milan to show the right way to feature Native American-inspired designs. The design house teamed up with celebrated Metis artist Christi Belcourt to adapt one of her paintings into prints for several of its Resort 2016 pieces. The results are not only absolutely, jaw-droppingly gorgeous, but respectful to the artist and her traditions.

Belcourt's work is featured in the National Gallery of Canada and perhaps her most powerful work is her embroidery of spats as part of the Walking With Our Sisters tribute to missing and murdered Indigenous women in Canada. Belcourt told Native Max Magazine that Valentino creative directors Maria Grazia Chiuri and Pierpaolo Picciol reached out to her in a way that surprised and impressed her: "They contacted me. I don’t know how they heard about my art. I appreciate the way they reach out to artists and really respect the integrity of their work."

Belcourt added that she was initially hesitant to participate in a collaboration with the brand because she's incredibly passionate about environmental rights (the piece of her art Valentino used was called Water Song) and wasn't sure of the company's track record. After research showed that Greenpeace had placed the brand atop its ranking list of major fashion houses' sustainability practices, she agreed.

Belcourt was involved in the process, indicating that there were no creative differences between her and the design house. She told Native Max that the pieces took months to create due to Valentino's commitment to perfectly matching the shades in her painting, which emulate traditional Metis beadwork using paint instead of beads. The results were visually stunning and impressed even the artist. “I absolutely love them all. But I really find the three long floor-length dresses to be works of art themselves," she told the publication.

The designs are gorgeous and seeing the way that Valentino conducted its business is almost just as astonishing. Instead of stealing from an Indigenous artist or clumsily and insultingly "paying tribute" to Native American fashion and design, Valentino partnered with and compensated an Indigenous artist while taking her designs to one of the most prestigious fashion events of the year. According to Dr. Adrienne K. of Native Appropriations , this is exactly how things should be done:

"The bottom line is this: There should be no representations of us, without us. You want to draw upon Indigenous cultures for your line? Involve Indigenous artists and designers. There is no alternative answer. You love Bethany’s Crow designs? Call Bethany. Collaborate with Bethany. Give her a chance to show at New York Fashion Week with you. The fashion world costs hella money to get a foot in the door, so if you as a designer truly want to offer a 'tribute' to Native people? Bring a Native designer up with you."

While summer brings about a scourge of "festival fashion" that tends to appropriate many different cultures, Valentino sets the bar seemingly high for brands and designers, but proves that being respectful is actually so simple: All you have to do is ask and give credit where credit is due. Is that really too much to expect?