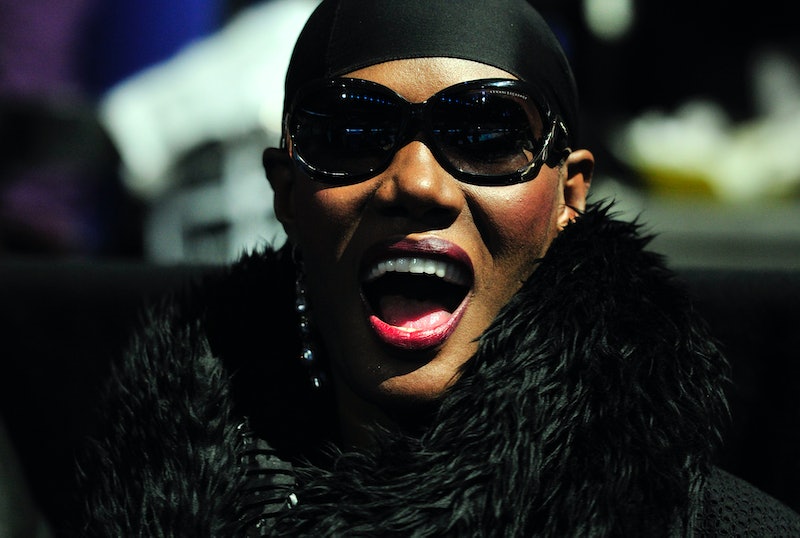 Actress, model, singer, icon, and all around vamp, Grace Jones is publishing a memoir! That’s right the Grace Jones, as in she of the famous cheekbones, as in the James Bond femme fatale to end all femme fatales. The 67-year-old's memoir was first announced back in 2013, but The Hollywood Reporter gave us a sneak peek at the (naturally) gorgeous cover art and announced that the book will be officially on sale on September 29th this year.

Strangely enough, the memoir will be titled I’ll Never Write My Memoirs, named, according to Billboard, after a lyric from one of Jones’ songs. “I wrote a song called Art Groupie,” Jones said, “First line said 'I'll never write my memoirs' — that was a long time ago. Since then, I thought, if I don't do it, somebody else will."

If you’re not already totally in love with Jones and dying to buy her memoir come September, then you can get familiar with the amazingness that is Grace Jones by checking her out as the famous henchman May Day in the James Bond film A View To A Kill, or in her iconic (kinda controversial) modeling work with French photographer Jean-Paul Goude.

Grace Jones has had an eventful life and career, to say the least. Born in Spanish Town, Jamaica, she became a world-famous famous singer, model, and actress, working with the likes of Jessica Lange, Andy Warhol, and Arnold Schwarzenegger. And come September, we'll finally get to read all about it! Until then, peep the ever-unique photo that will be gracing the book cover.

More like this
30 Books To Read This AAPI Heritage Month
By K.W. Colyard
9 Must-Read New Books Out This Week
By K.W. Colyard
Danny Boyle's 'Pistol' Explores The Extreme Highs & Low Of An Iconic '70s Band
By Rachel Mantock
16 Novels That Paint A Realistic Portrait Of Abortion
By K.W. Colyard
Get Even More From Bustle — Sign Up For The Newsletter