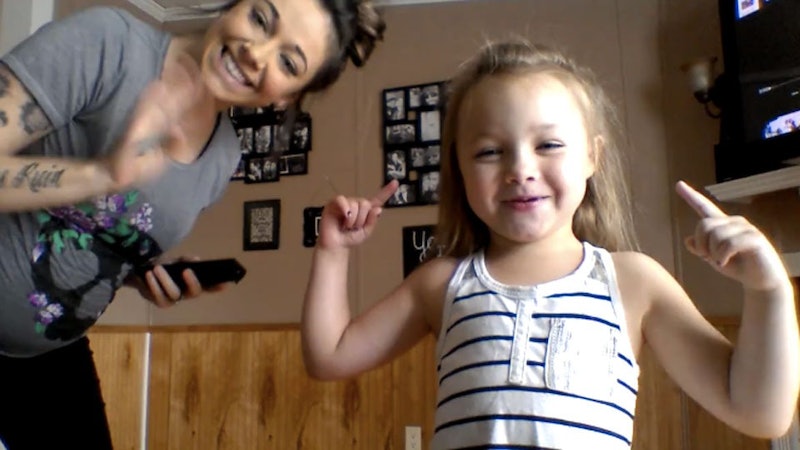 Y'know, I'm real #blessed and #spoiled living in a city with really incredible rap radio stations. As such, Silento's "Watch Me (Whip/Nae Nae)" has been on the radar for a good minute now. (Plus he's from Atlanta, the place where I live, so.) And for whatever reason, children seem to love the absolute hell outta it, as evidenced by 4-year-old Heaven King's music video. This claim is now further backed up by a new video featuring a pregnant mom and daughter's dance routine.

I have never been 8 months pregnant like this woman is, but I can't imagine it as exactly invigorating. I recently spent half a week with my then 8 months pregnant sister and she just looked so uncomfortable the entire time. Make no mistake, she was quite the trooper keeping up with city explorations and pizza-eating marathons, but she certainly didn't incite any rigorous exercise (which, I guess is to be expected since neither of us led particularly athletic childhoods).

However, Nikki Taylor and his 6-year-old daughter Jaylyn got pulses pounding and the dance floor grooving with a recent performance. Originally intended as a joke for Nikki's fiancé, the video actually blew up when they cross-posted it on Facebook. In the first 48 hours, the video generated seven million views. That's some serious mother-daughter teamwork in action, y'all.

Before they launch into this legendary fire number, Jaylyn leans into the camera for a special message:

Yeah, well, Jaylyn? I love your manicure. For real. Watch this power duo get down:

Silento may have handcrafted "the song of the summer," but he probably didn't plan to incite so many children and parents to throw down to it on camera. Like this guy and his fresh baby daughter:

And here's a more cooperative version of a father-daughter team taking it on (with cameo by baby brother or excruciatingly tiny grandfather person, I can't tell):

You might assume since all these dads are able to warp their dadbods into such shapes and moves it must be easy. Even an 8 month pregnant woman could pull it off! And that tiny old man! But you'd be wrong. Watch as this one guy still can't understand how to duplicate the dance, even with Silento himself trying to show him how:

This guy is officially on my sh*t list, a move unlikely to upset him since he subbed actual effort for muttering obscenities. Man, parents. Parents are pretty cool sometimes, huh?

More like this
TikTok Is Using A Kendrick Lamar Song To Post Thirst Traps
By Courtney Young
What Does “Gatekeeping” Mean On TikTok? The Viral Term, Explained.
By Courtney Young
TikToker Kate Glavan Has The Antidote To The “Hot Girl Walk”
By Alexis Morillo
Here’s What Sarah Jessica Parker’s Canned Cosmo *Actually* Tastes Like
By Emma Garza
Get Even More From Bustle — Sign Up For The Newsletter