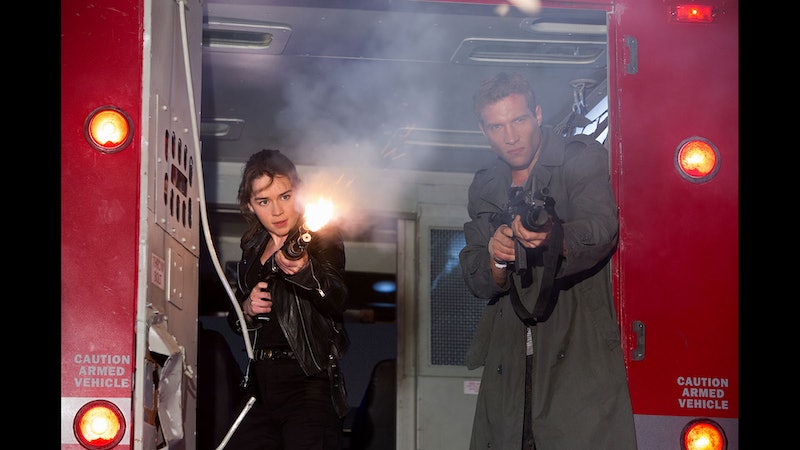 Midway through Terminator Genisys, John Connor refers to himself and his parents, Sarah Connor and Kyle Reese, as sort of maroons in time, untouchable by the chronological flux around them. It's likely a response to the inevitable fan outrage over the discontinuities in the Terminator franchise's timeline, but Genisys still lodges itself firmly in Arnold Schwarzenegger's original universe, even referring to — and recreating — scenes from the James Cameron films. It cannot entirely escape the films that preceded it, nor should it, but it may leave viewers wondering, when does Terminator Genisys take place?

The very goal of Sergeant Kyle Reese's mission in Genisys is to create a new future, so it's sometimes unclear how his future and the future of everything from The Terminator to Terminator Salvation can peacefully coexist. (Part of the answer is that there's nothing peaceful about the Terminator.) In an extended press release, producer David Ellison responded to this, noting, “Terminator Genisys is not a remake, it's not a reboot, it's not a sequel — it's really a reimagining." This frees it from the constraints of fan theories and the weight of James Cameron's “two perfect movies," as director Alan Taylor told Polygon. It cleverly skates around the issue by setting itself apart from the original franchise. But it's still a Terminator movie, produced with its original star's blessing and involvement, so fan theories are really inevitable.

Let's try, though, to break the timeline down (spoilers ahead). The year is 2027 when we first enter the Genisys scenario, and we're greeted with the most futuristic moment so far in the franchise. The original film's robots arrive from 2029, and 2003's Rise of the Machines refers to John's death in 2032, but we never see that future come to fruition and the apocalypse is averted yet again. It quickly returns to 1984, the year of the first Terminator film. Kyle Reese goes back in time — but he's pursued by a fresh-faced Arnold Schwarzenegger, who subsequently engages in Genisys's highly publicized Terminator-on-Terminator fight scene. Reese expects to find an innocent Sarah Connor in need of protection, finding instead a battle-hardened young woman who had been raised by a Terminator (the more aged Arnold Schwarzenegger) sent to protect her. He might even be the Terminator sent back for protection in Rise of the Machines, but Genisys dodges that question — perhaps to be answered in the coming sequels.

Despite the nod to the first film, in which Schwarzenegger's Terminator is a single-minded killing machine, the older, fatherly Terminator comes out on top, and from there, the film diverts from the timeline of the original universe. Everything has changed, and part of the appeal of Genisys is in watching the characters wrestle with their own chronological inconsistencies and the way that their actions have already, and will continue, to distort what they remember and what they will experience.

So in response to the original question, when is Terminator Genisys set, the answer is probably: it's irrelevant. Intentionally so. Without coming out and saying it, filmmakers have implied that they hoped to sidestep the more recent (and really, far inferior) Terminator films and piggyback on the first two. Screenwriter Patrick Lussier told Cinema Blend that “the world that he inhabits and affects most are the first two movies," so that's where Genisys focuses its efforts.

This hasn't stopped fans, often a sequel's harshest critics, from attempting to assemble a coherent narrative, despite the assurances of filmmakers that Genisys and its two impending sequels will be more than just attempts to revive a 30-year-old franchise. io9 picked up on a chart by a commenter that purports to fit all of the films, as well as the television series, into one neat whiteboard timeline. Den of Geek noted a correspondence with the explanation for the alternate universes of the most recent Star Trek films, as well as Back to the Future II (the best Back to the Future, in my humble opinion).

Time travel is often used as a convenient shield for plot holes (I love Lost, but really — how did their clothes travel with them this time? What about that canoe?), but as far as Terminator Genisys is concerned, it also succeeds in honoring the original films while still building on what James Cameron envisioned way back in 1984.

More like this
Amanda Seyfried Reflects On 'Mean Girls' & "Gross" Remarks That Men Made After It
By Jake Viswanath
'Dirty Dancing's Jennifer Grey On The Tearful Moment That Changed Her Relationship With Patrick Swayze
By Sam Ramsden
Cameron Diaz Just Recreated *That* Iconic 'There’s Something About Mary' Scene
By Rachel Mantock
Remember When Benedict Cumberbatch Announced His Engagement In A Newspaper Ad?
By Hugh McIntyre
Get Even More From Bustle — Sign Up For The Newsletter