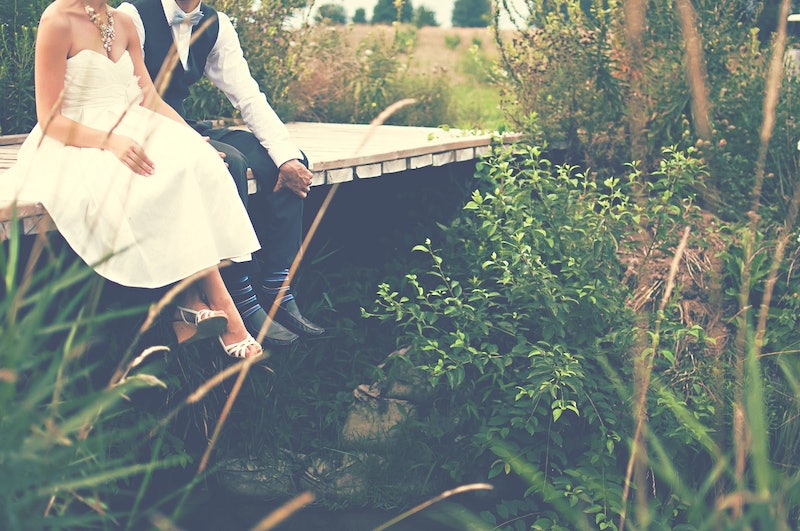 For many women, they’ve dreamed about their wedding for as long as they can remember. They’ve envisioned the perfect location, the colors, the flowers, and having the chance to bring that special day, in all its shades of turquoise, to fruition, is basically the cherry on the cake of life. But sometimes wedding dreams and reality don’t line up, your turquoises aren’t quite what you hoped, and you’re being married under a tent in torrential downpour instead of in an idyllic garden somewhere in the South of France. So much for the perfect location. Science of Relationships conducted a about the best wedding locations. They asked participants to tell them their dream location and the location where they actually got married (or will be getting married.) What they found was that, despite what one might think, brides and grooms want to keep their wedding spots close to home and very few actually want to fly off to some foreign land for the big day. And, surprisingly, dreams of such a wedding weren’t exactly as common as one would think either.

Since the wedding season is in full swing and you’re probably knee-deep in invitations you need to return and trying to budget how the hell you’re going to pay for all the weddings you have to go to this summer, let’s keep the wedding theme alive, shall we? Here are the top spots where people are getting hitched.

5. Destination Wedding Outside The United States

Of the 18 percent of participants who had dreams of marrying anyplace else in the world besides the U.S., only three percent were so fortunate. It’s just as well ― if that marriage doesn’t work out, and 100 people dropped thousands and thousands of dollars to fly to Spain, they’re not going to be very happy with you.

4. Destination Wedding In The United States

Although 18 percent dreamed of a destination wedding in the United States (Texas, anyone?), only eight percent were actually able to pull it off.

If you fell in love in college, it makes perfect sense that you’d want to go back to where it all started. According to the results, eight percent got married in town where they went to school and seven percent had dreamed of doing so.

For 23 percent, it was just easier to get married where they lived at the time of their wedding. I mean, it’s not like you have to travel too far, so why not? Also, of those surveyed, 19 percent had dreamed of getting married in their current city anyway.

More like this
All Of Kourtney Kardashian’s Wedding Dresses
By Allie Fasanella
2022's Top Wedding Hair & Makeup Looks, According To Pinterest
By Olivia Rose Ferreiro
The Best Looks From Kourtney & Travis’ Wedding
By Dominique Norman
22 Chic Bridal Swimsuits For All Your Wedding Festivities
By Avery Matera
Get Even More From Bustle — Sign Up For The Newsletter