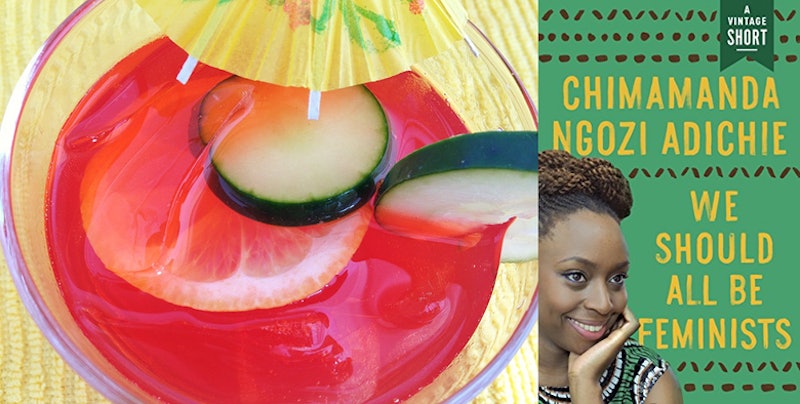 Whether you're waking up with the news and a cup of coffee, or tucked into bed with a light novel and some hot tea, drinking and reading go hand in hand. But drinking alcohol with a favorite book is also a habit steeped in literary tradition. Writers like C.S. Lewis, Norman Mailer, and Ernest Hemingway were known to frequent particular watering holes, many of which have become famous attractions for book nerd tourists. The link between books and booze is so strong that book- and writer-themed bars crop up everywhere, even in places the authors never lived. Today, you can visit Poe's Tavern on Sullivan's Island, The Hobbit Cafe in Houston, and Hemingway's Lounge in Hollywood.

My favorite pub doesn't have a rich history; it's just a cozy place where neither the lights nor the sounds are too loud. But I read there, I write there, and I drink there. For me, there's almost no better pairing than a hearty pint and a good book when I'm by myself. I just curl up in a booth and let everything else slip away.

So the next time all your friends are busy, but you just have to get out of your apartment, plan a trip to your favorite bar and bring a book along. If you need help choosing what to read next, check out these book suggestions based on your poison of choice.

If Your Favorite Drink Is Spiked Punch...

Read: We Should All Be Feminists by Chimamanda Ngozi Adichie

In Chimamanda Ngozi Adichie's home country of Nigeria, Chapman is a popular punch made from fruit-flavored sodas, grenadine, and Angostura bitters, which some have compared to Spanish sangria. Teach your favorite bartender how to make Chapman, or try mixing up a batch at home, and pair it with Adichie's short manifesta: We Should All Be Feminists.

If Your Favorite Drink Is A Mint Julep...

Quintessential southerner William Faulkner was known to love the quintessential southern drink: mint juleps. The mere mention of the drink calls to mind images of women and men on white verandas, wilting and sweating through their seersucker suits in the southern summer heat. Cool off on the next sweltering day with Faulkner's Absalom, Absalom! and a fresh mint julep.

If Your Favorite Drink Is a Mojito...

Read: The Old Man and the Sea by Ernest Hemingway

Like the mint julep, the mojito is a mint-infused cocktail sure to keep you cool in the Havana heat. Since he was a diabetic, Ernest Hemingway probably didn't indulge in these sweet treats as often as he would have liked to, but the association between the writer and the Cuban cocktail remains strong. Enjoy a mojito while you read The Old Man and the Sea: Hemingway's famous Cuban fable.

If Your Favorite Drink Is A Glass Of Merlot...

Jane Austen was a known lover of French wine, though her drinking habits are not so famous as those of other writers represented here. Pair your next Merlot with Northanger Abbey. The campy suspense in Austen's spoof on the Gothic novel will go over well at your next wine-and-pajamas night.

If Your Favorite Drink Is A Sidecar...

Pulitzer Prize-winner Edna St. Vincent Millay's affinity for rum sidecars is almost as famous as her sonnets. Check out First Fig and Other Poems, which contains two of Millay's poetry collections — Second April and A Few Figs from Thistles — in one. So pour yourself a sidecar and read some great modern poetry. You deserve it.

If Your Favorite Drink Is A Martini...

Ian Fleming and James Bond both enjoyed a good martini, but the two men preferred different styles. When you sit down with Moonraker, you can drink Bond's famous "shaken, not stirred" creation, or try Fleming's favorite Vesper on for size. Either way, you're in for a fantastic spy novel and an equally great drink.

If Your Favorite Drink Is A Tom Collins...

A Tom Collins may have been the drink of choice for J.D. Salinger's infamous, angsty teen, Holden Caulfield, but the drink was also popular with members of Salinger's fictitious Glass family. Mix up a pitcher-full of this alcoholic lemonade and enjoy tales from the lives of the youngest Glass girls in Salinger's Franny and Zooey.

If Your Favorite Drink Is A Jack Rose...

Of all the alcoholic writers, John Steinbeck is certainly one of the most infamous. Therefore, I encourage you to drink your Jack Rose responsibly. Although the drink has fallen out of favor in recent decades, it was reportedly Steinbeck's favorite cocktail, and is composed of applejack, grenadine, and lemon or lime juice. Sip on a Jack Rose while you read one of Steinbeck's many novels of abject misery, Cannery Row.

If Your Favorite Drink Is An Old Fashioned...

The favorite drink of Mad Men showrunner Don Draper, the Old Fashioned has become associated with mid-century suavity. Salesman Frank Wheeler may not be as fabulous as Madison Avenue's favorite creative, but reading all about his troubled marriage in Revolutionary Road will make the fact that Mad Men is over just a little less painful.

If Your Favorite Drink Is An Irish Coffee...

James Joyce and Irish coffee don't quite hail from the same part of Ireland, but that doesn't mean you can't enjoy a hot beverage or two while you read Joyce's most famous story collection. Dubliners centers on middle-class life in the city, with themes progressing from childhood to death. It's not too heavy to sit well with an Irish coffee in your stomach, so drink and read to your content.

If Your Favorite Drink Is a Manhattan...

Read: The Year of Magical Thinking by Joan Didion

Alcoholism may run in Joan Didion's family, but that doesn't stop the writer from using drink as a writing tool. She says, "I need an hour alone before dinner, with a drink, to go over what I've done that day." Although she doesn't specify what drink she enjoys, a Manhattan is the perfect balance of strong and dainty to pair with Didion's memoir, The Year of Magical Thinking.

If Your Favorite Drink Is a Cosmopolitan...

Where'd You Go, Bernadette? is Maria Semple's comedic take on a precocious daughter's investigation into her mother's disappearance. I think the novel's cheekiness — particularly in the face of its dark subject material — makes for a wonderful pairing to go with your next Cosmopolitan. Just be sure to read between sips: you don't want to laugh cocktail out of your nose.

If Your Favorite Drink Is a Bloody Mary...

Read: Divine Secrets of the Ya-Ya Sisterhood by Rebecca Wells

Rebecca Wells' Ya-Yas are raucous foursome of heavy-drinking southern ladies, who, like liquor, get better with age. In Divine Secrets of the Ya-Ya Sisterhood, you'll ride along with the Sisterhood in Teensy's convertible, drinking Bloody Marys from a Thermos and just enjoying being a woman.

If Your Favorite Drink Is A Lager...

Stephen King is an author who should always be enjoyed with a good beer. Pour yourself a pilsner or a bock and crack the spine on 11/22/63, King's 2011 novel about a time-traveler who sets out to prevent John F. Kennedy's assassination. Sure, you could read about Jack Torrance's confrontations with the demon liquor in The Shining, but why harsh your own buzz?

If Your Favorite Drink Is a Pisco Sour...

The pisco sour pairs perfectly with Truman Capote's Breakfast at Tiffany's. You can just imagine Holly Golightly's assorted party guests clinking — and spilling — these little cocktails together as they dance through the night. Capote's heroine might be somewhat of a menace to society, but that doesn't mean you can't drink politely while reading about her escapades.

If Your Favorite Drink Is a Vodka Stinger...

Harry "Rabbit" Angstrom is a heavy drinker, and the vodka stinger (creme de menthe and vodka) is one of many drinks he imbibes over the course of four John Updike novels. This two-ingredient cocktail is a fairly simple drink that you can enjoy while reading about the life of a fairly simple man. So pick up Rabbit, Run to read as you sip your favorite stinger.

If Your Favorite Drink Is a Boilermaker...

Infamous hard-drinker Charles Bukowski loved a good boilermaker (whisky with a beer chaser). Though I'm partial to the Irish Car Bomb, I won't tell you which heady combination you should choose. Just know that you're pairing it with Bukowski's semi-autobiographical novel, Ham on Rye — a bildungsroman about growing up in Los Angeles through the Great Depression — and select your drink accordingly.

If Your Favorite Drink Is a Gin Rickey...

Read: The Beautiful and Damned by F. Scott Fitzgerald

Gin may no longer be the national drink, but that doesn't mean you can't enjoy a gin cocktail with an F. Scott Fitzgerald novel. According to some, the gin rickey (gin, soda water, and half a lime) was the author's drink of choice. Drink them along with Anthony Patch and Dick Caramel — yes, that name is awkward — as you read Fitzgerald's second novel, The Beautiful and Damned.

If Your Favorite Drink Is An Ale...

Every Hobbit worth her salt likes a good ale now and again. Pick out your favorite IPA or Scotch ale and sit down with The Hobbit: the novel that began J.R.R. Tolkien's high-fantasy legacy. Whether you're reading it for the first time or the fourteenth, you're sure to love it. The Hobbit is a cozy novel, and, when paired with your favorite beer, it gets even more homey.