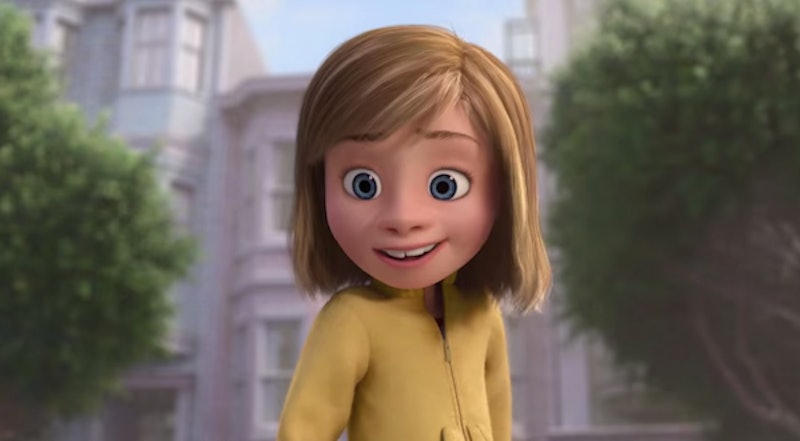 "What's going on inside her head?" This was the question that Inside Out director Pete Docter found himself asking several years back, and it's what drove him to create the Pixar film that everyone is talking about. It's no secret that the filmmaker used his then-preteen daughter, Elie, as inspiration for the film's 11-year-old Riley, but did he pull all of his ideas for the movie from his own experiences? Is Inside Out based on a true story?

Speaking with Vulture, the director recalled that when Elie reached 11, his formerly bubbly little girl became reclusive, as if her "childhood joy took a vacation." Her whole demeanor changed, and the shift in Elie's emotions caused Docter to feel a sense of vicarious loss, as if his window into her world of childhood wonder was being shuttered. He discussed this phenomenon with Pixar producer Jonas Rivera, and Inside Out began to unfold as a way of understanding what Elie was thinking and feeling and why.

Yet while Riley is based primarily on Elie, she also has some connection to Docter's own childhood self. In the Vulture interview, Docter explained that, like Riley, he also grew up in Minnesota, where he was surrounded by sports (although, unlike the main character, he was no athlete). He said that middle school was a difficult time for him, like it proves to be for Riley, saying that "the social stuff really stressed me out."

But it did make for good inspiration for a film — but not without serious additional research. In Inside Out, viewers are able to witness Riley's experiences from within her mind, where her emotions react to her environmental stimuli and determine both her emotional state and her behavioral responses. In an interview with The Washington Post, Docter noted the importance of the distinction that the film takes place in Riley's mind as opposed to in her brain. The brain is a tangible organ, he explained, filled with neurons which respond in a predictable pattern to action potentials, while the mind is a more nebulous concept, blending emotion and consciousness and perception and all of the things which ultimately make us individual sentient beings.

Yet there are multiple schools of thought for how to best define "the mind," and so extensive research on the topic was necessary in order to determine how to best create the landscape of Riley's mind. Docter combined aspects of the mind according to Freud, Jung, and neurology, and the result was the construction of Riley's mind as a space called Headquarters. Within Headquarters reside personified archetypes of the five core emotions: Joy, Sadness, Fear, Disgust, and Anger. Riley's affect shifts not only in response to her current physical situation, but also in response to which emotion is in control within Headquarters at that moment. It is when Joy ceases to be the consistent ruling emotion that we witness Riley's personality significantly change, transitioning out of a carefree childhood into the fearful process of growing up.

It's already an intense transition to witness, but when viewers observe this shift with the knowledge that it's based on Docter's own personal experiences, there is suddenly an added layer of emotion. We feel Riley's discomfort as we see her going through this development, but we also feel the pain of a parent witnessing the changes from the outside only and desperately wishing he had some tool to help him understand. Docter found his tool in the form of CGI, using animation as a way to create a concrete representation of Elie's emotions which he couldn't actually see. The resulting film is heartfelt, funny, and bittersweet — just like real life, as Docter and his daughter know all too well.