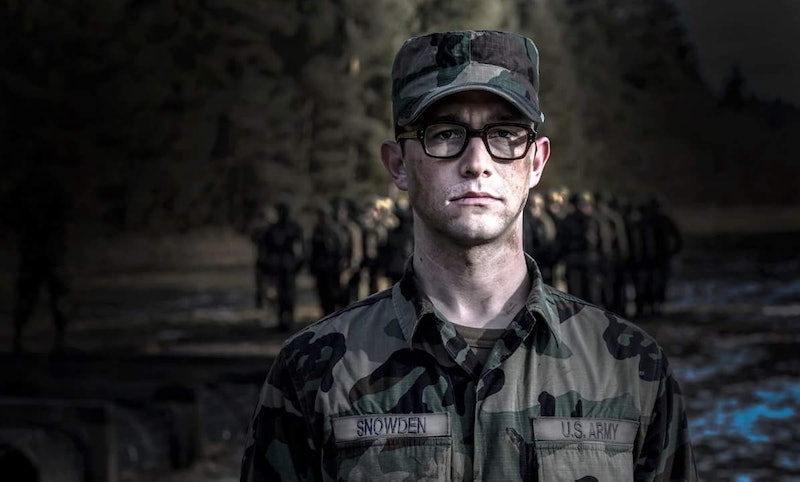 Even though the movie wrapped filming only a couple of weeks ago, the Oliver Stone's Snowden teaser trailer is here. In this biopic, Joseph Gordon-Levitt stars as the infamous NSA intelligence whistleblower, Edward Snowden, who leaked top-secret information about the National Security Administration. While the teaser doesn't feature any shots of Joseph Gordon-Levitt himself in the main role, it does gives audiences a deeper insight to both the character he will be playing and the film's overall tone.

It's hard to imagine a biopic doing well as a thriller, but, if the teaser is any indication, the movie is going to be intense. We begin with soft music in the background as different job titles fade on and off the screen. As an image of the American flag trails between texts, the song becomes more recognizable as a haunting version of "This Little Light of Mine." Finally, the tempo picks up, and we're left with an upside down flag that reads "One Nation Under Surveillance For Liberty and Justice For All." Pretty dramatic if you ask me. So what exactly do all of these images mean? Let's take another look as we try to decode possible hidden messages for the film's tone.

But first, here's the full teaser.

With some simple text on a screen, this image reveals that, sometimes, a little can say a lot. Even simple job titles provide us with more information on Snowden's career.

At first glance, this image doesn't seem like much of anything but a few stripes on an old cloth, but just wait.

As more job titles float on the screen, another image reveals that the dirty cloth it is actually the American flag. Perhaps this is supposed to personify the government's dirty secrets?

As the past titles took us through all of Snowden's different jobs, age 29 is the most shocking title of all, because it is when he became the most wanted man in the world. Aka, when he leaked information about the NSA.

5. A New Pledge of Allegiance

As the flag hangs upside down, a beating drum signals these 10 words, one line after another. Could this signal a flipped state of loyalty to the republic?

6. Title Says It All

With one final word, the teaser wraps with the basic for the whole movie, Edward Snowden.

And you can't forget the amazing cast for the movie. It is just me, or does Nicolas Cage have a thing for history films? Either way, I've got goosebumps already.