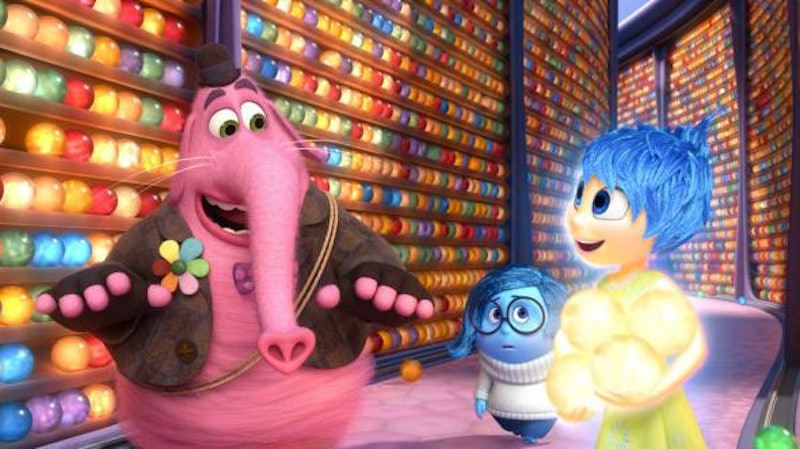 By now, everyone knows pretty much what to expect from Inside Out, Pixar's newest movie: tears, tears, and more tears. For some, the sobs start before the movie begins, while they're watching the short before it, Lava; for others, they don't come until midway through, when Riley's emotional center starts spinning out of control. Yet even if those two moments don't trigger a need for tissues, one part of the movie most definitely will: when Bing Bong, Riley's imaginary friend from childhood, appears on-screen. Voiced by Richard Kind, the lovable creature makes such an impression that it's practically begging for a spinoff — but will it actually happen? Will there be a Bing Bong movie?

Speaking as someone who's currently traumatized by the idea that there's my own forgotten imaginary friend fading away somewhere in the back of my memory, there better be. Bing Bong was the best character in a sea of great Inside Out creations, and his short time on-screen has triggered a massive response from heartbroken fans. He certainly deserves a movie of his own, but sadly, that's not enough; in order for him to get true spinoff treatment, Inside Out director Pete Docter — or at least, someone else at Pixar — needs to want it to happen. And right now, Docter isn't on-board with another Inside Out movie. He told Entertainment Weekly that "there’s no sequel idea from me at this point."

He did add, however, "never say never," so it could happen. And if it does? I hope Bing Bong is the direction he chooses. A direct Inside Out sequel about Riley would be great, of course, but focusing on Bing Bong would be even better, as he's the coolest, funniest, most heart-wrenching character in Inside Out. Here's what a Bing Bong spinoff could look like:

Joy did promise Bing Bong that she would make Riley remember him, and I'd think she'd keep good on her word. Once Riley remembers her old friend, she would revive him, even if only as a fond memory.

Look, it'd be a bit odd for an 11-year-old to have an imaginary friend, but hey, it could happen.

Bing Bong Goes Into The Land Of Forgotten Imaginary Friends

It's Pixar — there has to be a place like this somewhere. Imagine a huge land filled with thousands of now-unnecessary imaginary friends, all bonding over their experiences and getting on with their new lives.

Bing Bong Gets Assigned To A New Kid

I highly doubt Riley was the only 3-year-old who dreamed up a part-elephant, part-dolphin, part-cat hybrid. Somewhere out there, there's another little kid needing his or her own imaginary friend, leading Bing Bong to find a new charge.

Whatever Bing Bong's future entails (and don't say he doesn't have one — I cannot deal with that possibility), it's clearly something great. Pixar, let the guy have his own movie, because we all deserve as much of him in our lives as we can get.