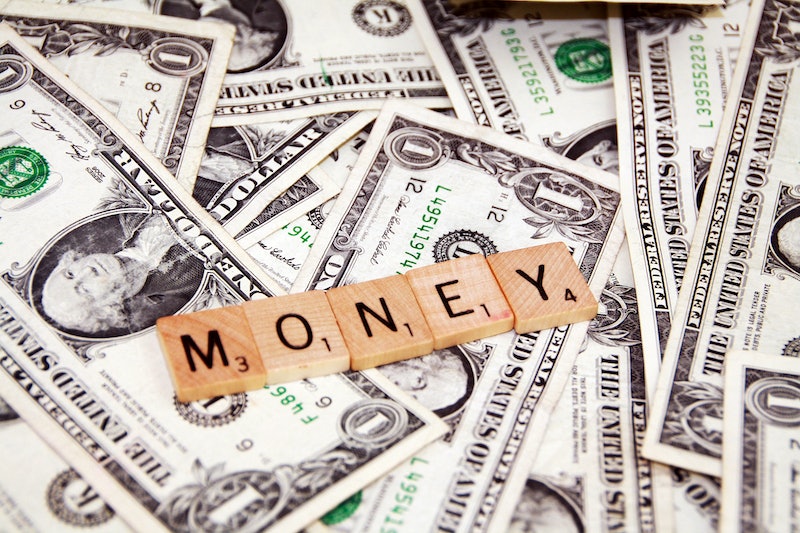 If there's one thing I learned during my various and sundry escapades as a babysitter in my teens, it's that some topics are considered taboo to discuss in front of children (choice examples have included evolution, Gloria Steinem, and "The Gays," in my experience). Most parents would probably agree that talking to kids about money is awkward at best, but you might be surprised to hear which households tend to avoid the subject. According to recent research, many rich parents don't talk about money with their children. In fact, the more money they make, the less likely they are to discuss the subject, which is... pretty much the opposite of what I was expecting, to be honest.

According to Jezebel, financial adviser Ron Lieber covered the results of research firm Spectrem's study for Motherlode, the New York Times' parenting blog. According to their website, Spectrem conducts interviews and surveys in 25,000 to 30,000 wealthy households annually, and this year, Lieber asked them to include a few of his own questions designed to assess attitudes toward discussing income.

According to the survey, only 17 percent of respondents said they had talked about their income with their children, or at least planned to do so before they turned 18. Weirdly enough, almost the exact same percentage (18 percent) said they never planned to discuss the subject with their children. At all. As if it was some sort of dark family secret on par with Grandpa's philandering ways or Aunt Lucy's obsession with Nickelback.

The most common reason parents gave for their secrecy? "It's none of their business."

That's right — 32 percent of the parents surveyed said that the family income was none of their children's business, despite children being members of said family. According to Lieber, not only does this way of thinking discourage children from going to their parents about tough questions, but it's also just untrue. "If you’re a child living with your family, its revenues and expenses affect you in all sorts of ways, so of course it’s your business," he wrote in the Times.

Thirteen percent said that they were afraid the high income could negatively affect their children by motivating them to work less, knowing they could fall back on the family money. Unfortunately, as Lieber points out, that's akin to a "vote of no confidence." Lastly, nine percent of parents didn't want to run the risk of their children telling other people about their income, presumably because it would sound like bragging even if they didn't mean it that way.

Out of the parents who did discuss their income with their children, most claimed they did so in case of emergencies, or while talking about educational goals. With the ever-increasing cost of college tuition and rising cost of rent in urban areas around the nation, it's hugely important for parents to teach their children fiscal responsibility.

I'm not saying we all need to start emulating Drake and bragging about getting rich off of mix tapes, but it's hard to learn to make good financial decisions if nobody talks about money in the first place.

More like this
The Best Time To Date After A Breakup, According To Experts
By Bustle Editors
What Is Megan Thee Stallion’s Net Worth? The Traumazine Hitmaker Isn’t Worried About A Budget
By Hugh McIntyre
Gemma Collins' Net Worth Is Only Going Up
By Catharina Cheung
What Is Brad Pitt’s Net Worth? The Bullet Train Star Now Makes 8 Figures Per Film
By Hugh McIntyre
Get Even More From Bustle — Sign Up For The Newsletter