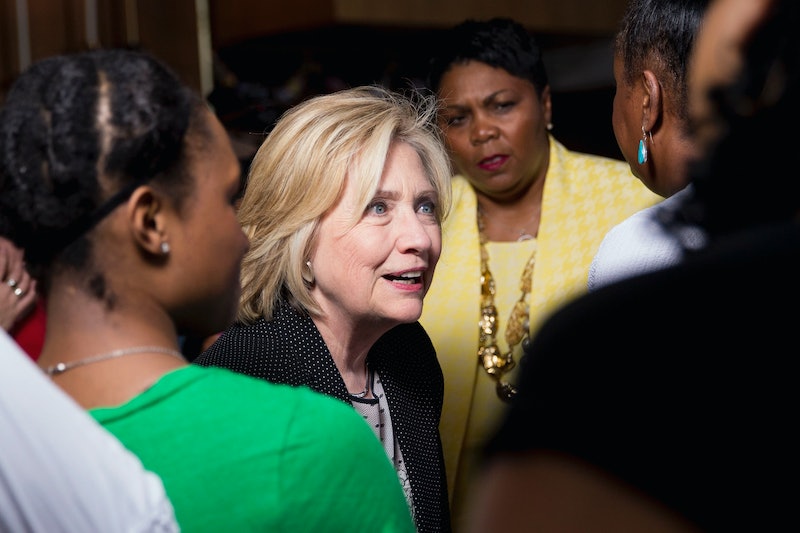 Misty Copeland has come a long way since her time in the corps de ballet, and even the world of politics has taken notice. On Tuesday, American Ballet Theatre in New York announced that it had promoted the 32-year-old Kansas City-born, L.A.-raised ballerina to the company's highest rank of principal dancer, joining the likes of similarly promoted soloist Stella Abrera, who has been with the company since 1996. News travels fast, of course, and by midday, even 2016 presidential candidate Hillary Clinton congratulated the hardworking Copeland on her accomplishment.

"Congratulations to Misty Copeland on becoming the first African American female principal dancer of the American Ballet Theater [sic]," wrote Clinton on Pinterest Tuesday morning, pinning a TIME article of the dancer to her "Women Who Inspire" board. "She devoted herself to dancing and never let anything stand in her way — talk about inspiring!" Clinton also congratulated the newly-minted principal dancer on her promotion over on Twitter, linking followers to the Pinterest board, and tweeting "Congrats, @mistyonpointe!"

Copeland wasn't the only inspiring woman hanging around on Clinton's newest social media channel either — since first launching her Pinterest page on Tuesday morning, the former Secretary of State made sure to tack up a few more famous faces as well.

So who else made Clinton's cut? The former FLOTUS, who has been accused of not showing her sensitive side nearly enough, made sure to display her vast cultural understanding by pointing to women outside of the political sphere, likely in an attempt to reach a broader network of female voters in the process. Whatever her motivation, there's no denying that the ladies on Clinton's list are anything but special.

The aforementioned ABT principal isn't just a dancer; she's an icon in the world of women's sports as well. After capturing the attention of sportswear company Under Armour in August 2014 (as well as, you know, everyone else in the world), Copeland was signed by the corporation to its "I Will What I Want" campaign, featuring the ballet dancer and her skills in a moving commercial released that same month.

In the commercial, Copeland dances over the voice of a young girl reading some of Copeland's own rejection letters, which she received from various ballet programs over the years, many of which criticized her looks and her physique as inappropriate for the ballet world. "You have the wrong body," stated one letter.

After years of dedicated training, however, Copeland managed to earn a spot with the prestigious American Ballet Theatre and rose through the ranks to become a soloist by age 24. Now 32, the newly promoted ballerina is making waves as the company's first black, female principal dancer in the company's 75-year history. Forget Sleeping Beauty — Copeland is the real fairytale these days.

Copeland isn't the only woman of color on Clinton's list. Labor activist Dolores Huerta received an honorable position on the "Women Who Inspire" board as well — and rightly so. Born in New Mexico and raised in Stockton, California, the civil rights proponent worked her way through the 1960s and '70s as an outspoken voice for agricultural workers, many of whom were too poor to afford their own food.

After founding the Agricultural Worker's Association in 1960, and later, the United Farm Workers association with leader Cesar Chavez, Huerta began advocating for migrant workers and impoverished farmers, eventually helping to pass labor laws that afforded poor workers with government assistance. "I couldn't tolerate seeing kids come to class hungry and needing shoes," Huerta once wrote. "I thought I could do more by organizing farm workers than by trying to teach their hungry children."

Clinton isn't the only one supporting Huerta's accomplishments. Rolling Stone recently suggested that the Huerta be featured on the $10 bill come 2020, after Treasury officials announced earlier this month that they would be printing a woman on U.S. currency for the first time.

Both Clinton's mother and daughter have played integral roles in the former secretary's life. As a child, Dorothy Rodham suffered through a tragic cycle of violent outbursts, abandonment, and emotional manipulation by her own mother, finally overcoming her struggles to settle down with businessman Hugh Ellsworth Rodham and obtaining work as a secretary.

Clinton recounted the words of her mother in her recent campaign kick-off speech, explaining that it was her mother's example and advice that kept her going through the worst parts of her career. "I think you know by now that I’ve been called many things by many people [but] 'quitter' is not one of them," said Clinton. "Like so much else in my life, I got this from my mother."

Clinton's equally talented and philanthropically invested daughter Chelsea has also shared a bounty of inspiring moments with the former FLOTUS, from pairing up to work with their global initiative, to spending one especially important day together in particular. "Chelsea's wedding was one of the happiest and proudest moments of my life," wrote Clinton on her Pinterest page Tuesday. Don't mind me, these are just happy tears...

Whose footsteps are better to follow in than those of former FLOTUS Eleanor Roosevelt? One of Clinton's very first pins, Roosevelt — a vocal supporter of the early black civil rights movement — was more than simply a woman in the White House, and has served as a longstanding source of inspiration for Clinton.

"I am a huge fan of Eleanor Roosevelt, and I have long collected portraits and mementos from her career," wrote Clinton on her Pinterest page Tuesday. "She championed many causes that are important to me: civil rights, child labor laws, refugees and human rights." Clinton added that the erstwhile U.N. delegate had pushed aside all criticism to fight for what she believed in: a notion that the 2016 presidential candidate has likely held strongly to in recent months, amidst her own swirl of controversy:

[Roosevelt] drew harsh criticism from the media and some in government for daring to define the role of First Lady in her own terms... But her spirit and commitment were indomitable, and she never let her critics slow her down.

If there ever was a perfect choice to spearhead a presidential campaign's first few movements on a new social media site, Eleanor Roosevelt is certainly it.

More like this
16 Novels That Paint A Realistic Portrait Of Abortion
By K.W. Colyard
'The Spy Who Died Twice' Is Based On A Major British Scandal
By El Hunt
23 Abortion Funds In States With Trigger Bans To Donate To
By Emma Carey
10 Must-Read New Books Out This Week
By K.W. Colyard
Get Even More From Bustle — Sign Up For The Newsletter