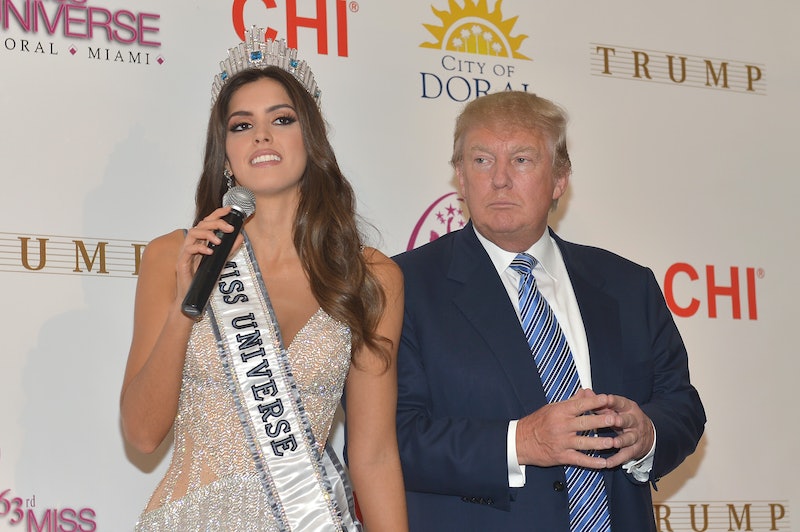 Donald Trump has finally heard his trademark dreaded words, "You're fired!" In an effort to distance itself from the presidential candidate/reality TV star, NBCUniversal has severed all connection with Donald Trump, which means that Celebrity Apprentice and the Miss Universe and Miss USA pageants will no longer be the same. This must be a huge loss to The Donald, as he has been very clear that he loves surrounding himself with beautiful women. Just check out these objectifying Donald Trump quotes about women.

The entertainment corporation was under pressure from numerous Hispanic groups to divorce itself from Trump. The mogul offended people across the country by his remarks that claimed some Mexicans were rapists. In response, July's Miss USA pageant and January's Miss Universe pageant, which are jointly owned by Trump and the network, will not air on NBC, according to CNN.

According to USA Today, Trump said, "They wanted me to do The Apprentice. And now with my statements on immigration, which happen to be correct, they are going to take a different stance and that's OK. Whatever they want to do is OK with me."

But Trump has to be more upset by this news than he is letting on. The Apprentice was a point of pride for him, and the pageants have long been in his portfolio. But Trump is known for controversial statements, and beautiful women have long been a favorite subject of his.

On The Way The World Works

In his segment about pageants, John Oliver showed a clip of Trump saying this gem. Being interviewed by a female reporter on the pageant, Trump said:

Well, obviously it's great outer beauty. I mean, we could say politically correct that look doesn't matter, but the look obviously matters. Like you wouldn't have your job if you weren't beautiful.

In his memoir, Trump 101: The Way To Success, he made it clear that women have a dollar amount just like a fine Renoir or constructing Trump Towers. He probably wants to put the pageant winners in the bank or in a museum.

Beauty and elegance, whether in a woman, a building, or a work of art is not just superficial or something pretty to see.

On What Should Or Should Not Impress

In 2012, Trump was facing a lawsuit from attorney Gloria Allred, who was representing a transgender contestant who had been disqualified from the pageant. According to Jezebel, he called TMZ and offered to show her his genitals, saying:

I think Gloria would be very very impressed with [my penis].

On Being Politically Incorrect

He needed the all caps to convey how gross he is. Other things Trump describes as beautiful include buildings and golf courses.

On An Olympian's Sex Life

This is too gross. Trump said of his daughter, Ivanka Trump:

I don’t think Ivanka would do that [pose for Playboy], although she does have a very nice figure. I’ve said if Ivanka weren't my daughter, perhaps I'd be dating her.

Trump really should not be criticizing the appearances of others. According to Jezebel, he said of the actress:

On The Apprentice's Female Contestants

In his book How To Get Rich, Trump said:

The early victories by women on The Apprentice were, to a very large extent, dependent on their sex appeal.

On What He's Getting

In Trump's book Think Big: Make it Happen in Business and Life in which he actually instructs others on how to live their lives, he said:

Oftentimes when I was sleeping with one of the top women in the world I would say to myself, thinking about me as a boy from Queens, "Can you believe what I am getting?"

On Proving What An Ass He Is

In a 1991 interview with Esquire, Trump showed what's really important to him: being rich enough for beautiful women to tolerate being judged by him. He said:

You know, it doesn't really matter what [the media] write as long as you've got a young and beautiful piece of [expletive].

Is it possible to put a presidential candidate in solitary confinement? That's the only way I can handle him.

More like this
34 Quotes That'll Inspire You On Juneteenth & Beyond
By Syeda Khaula Saad and Siena Gagliano
Boris Johnson’s Leadership Is In Question – Again
By Bustle UK
Michelle Obama & Taylor Swift React To The Supreme Court Overturning Roe v. Wade
By K.W. Colyard
Kendall Jenner & Devin Booker Reportedly Broke Up After 2 Years Of Dating
By Jordyn Tilchen
Get Even More From Bustle — Sign Up For The Newsletter