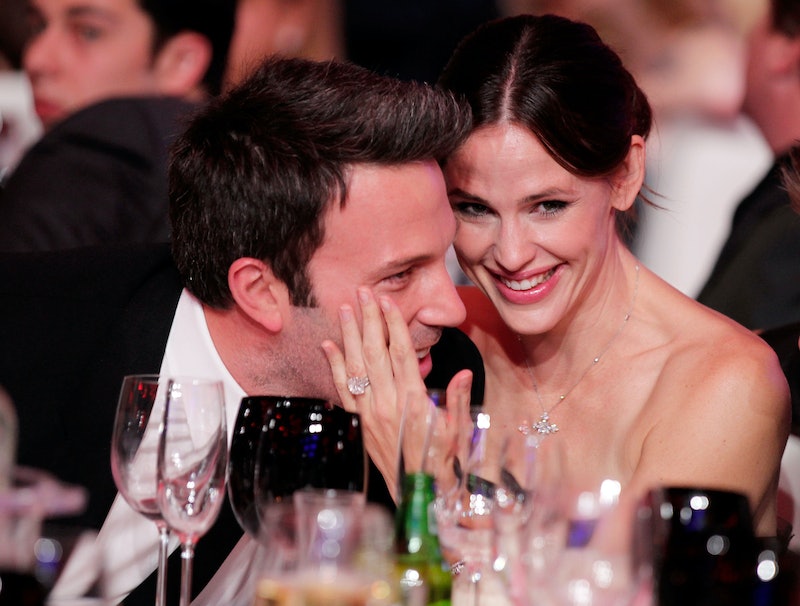 If you haven't heard the heartbreaking news, let me break it to you: Jennifer Garner and Ben Affleck have split after 10 years of marriage. I know, I know. So sad, right? Basically, true love doesn't exist. On Tuesday, the couple (who just had their 10th wedding anniversary on Monday) announced via a joint statement to People that they have gone their separate ways. For those wondering, their statement was the typical celebrity breakup announcement, aka way more private and traditional than Gwyneth Paltrow and Chris Martin's "conscious uncoupling" statement.

With the statement that appeared on Goop being perhaps the most talked-about breakup statement ever, it's hard to not compare her's to this one from another A-list Hollywood couple.

Now, here is Paltrow and Martin's:

It is with hearts full of sadness that we have decided to separate. We have been working hard for well over a year, some of it together, some of it separated, to see what might have been possible between us, and we have come to the conclusion that while we love each other very much we will remain separate. We are, however, and always will be a family, and in many ways we are closer than we have ever been. We are parents first and foremost, to two incredibly wonderful children and we ask for their and our space and privacy to be respected at this difficult time. We have always conducted our relationship privately, and we hope that as we consciously uncouple and coparent, we will be able to continue in the same manner.Love,Gwyneth & Chris

They both pretty much say the same thing and ask for privacy, but Paltrow and Martin's is lengthier and a bit more personal. They also give us more details about how they tried to work on their marriage before separating, but, sadly, that didn't work out for them. As for Garner and Affleck, their statement is short, to the point, and very tight-lipped about exactly why they split.

Goop and her former husband took the non-traditional route when revealing their marriage was ending. Most famous couples take after Ben and Jen by announcing the split, asking for privacy, and highlighting that their kids are the main priority.

If you announced to the whole world that you and your partner were divorcing, how would you do it? Would you follow in Affleck and Garner's traditional footsteps or take the more open road presented by Paltrow and Martin? For me, it's hard to choose, but I will say this: I admire Paltrow and Martin for being open and personal. As for Garner and Affleck, I understand why they'd want to remain mum and get to the point.

Whatever the case, it's sad either way and doesn't make the heartache any easier.