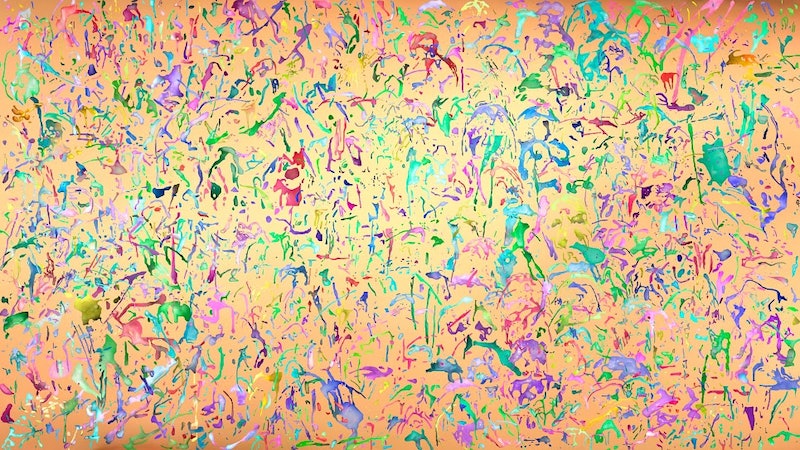 Check out that super cool painting up there. Would you believe that artist Faith Holland created "Ookie Canvas 1" out of semen — specifically, out of digitally-altered anonymous "money shots?" No? Well I have big news for you, buddy, because that is exactly what she did for her first solo show, Technophilia.

The show includes her previous series, "Visual Orgasms," which uses GIFs to poke fun at the way media implies sex through objects. Trains entering tunnels, cucumbers, and even eating fruit suggestively have all been frequently used as stand-ins for sex, often to get around censors, and Holland writes that this obsession with visual innuendo is a result of "pressure that Hollywood felt to represent orgasm visually — even under self-imposed rules not to." Similarly, the money shot in pornography "'proves' the veracity of the pleasure in the scene."

In case you're wondering, she does know of at least one woman who submitted an image, although most of the submissions were "cropped and ambiguous."

When asked what made her specifically interested in semen, Holland told ArtSlant that it was "the imbalance of visualizing pleasure that happens... It indicates male pleasure and not female pleasure."

Preach, girl. If you're in the area, Technophilia is on display at TRANSFER, a gallery in Brooklyn, until July 11th. Images: Courtesy of Faith Holland

More like this
How To Fight For Reproductive Rights, Based On How Much Time You Have
By Courtney Young
What Mercury Retrograde Spring 2022 Means For Your Sign's Sex Life
By Nina Kahn
How To Add Music To An Instagram Post
By Emma Carey
How To Use The Crying Filter On Snapchat, TikTok, Instagram & More
By Emma Carey
Get Even More From Bustle — Sign Up For The Newsletter