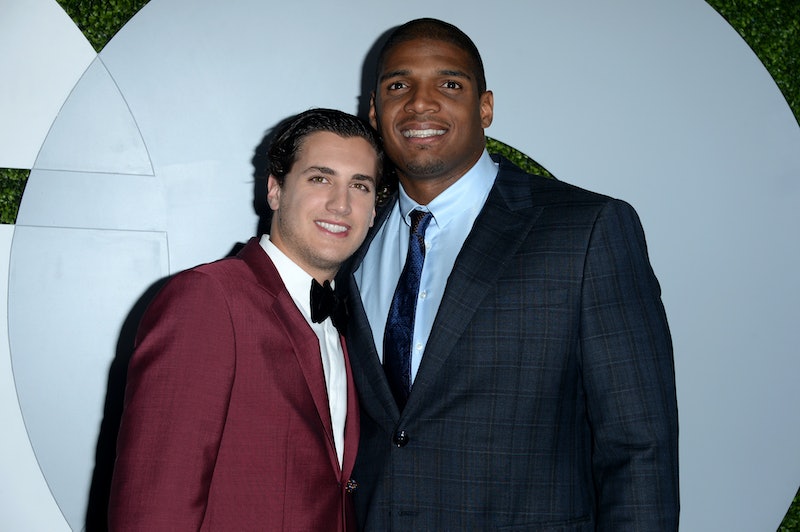 I'm calling it: June 30 is officially the worst day for celebrity couple news. Following the news that Ben Affleck and Jennifer Garner called it quits after 10 years of marriage, news broke that the first openly gay football player to be drafted by the NFL, Michael Sam, reportedly split with his fiancé Vito Cammisano. The two became engaged six months ago.

According to Us Weekly, a source close to the athlete stated that the couple called off their engagement. "They've been rocky for months," an insider said of the pair, according to the report. Us Weekly also notes that Sam appears to have deleted all traces of Cammisano from his Instagram account, including a photo of the two from their January engagement.

The couple began dating in 2011. Their engagement earlier this year at St. Peter's Basilica in Vatican City was captured in a series of beautiful and emotional photos, which can be viewed over on Entertainment Tonight.

In July 2014, Sam spoke about the start of their relationship to Out magazine, saying, "I could see [Cammisano] was interested. I bought him a couple of drinks, got us tipsy. Toward the end of the night, I put my arm around him, and it was over ... Everyone knew Vito was gay, so we couldn’t even be seen together. There was a lot of climbing out of windows.”

The two eventually split, but eventually got back together. This time, they didn't hide their relationship and Sam credits Cammisano for helping him come out. “Vito was really the person who showed me I had to do it,” Sam added. “I wanted us to be comfortable.”

Neither Sam nor Cammisano has publicly confirmed the breakup.