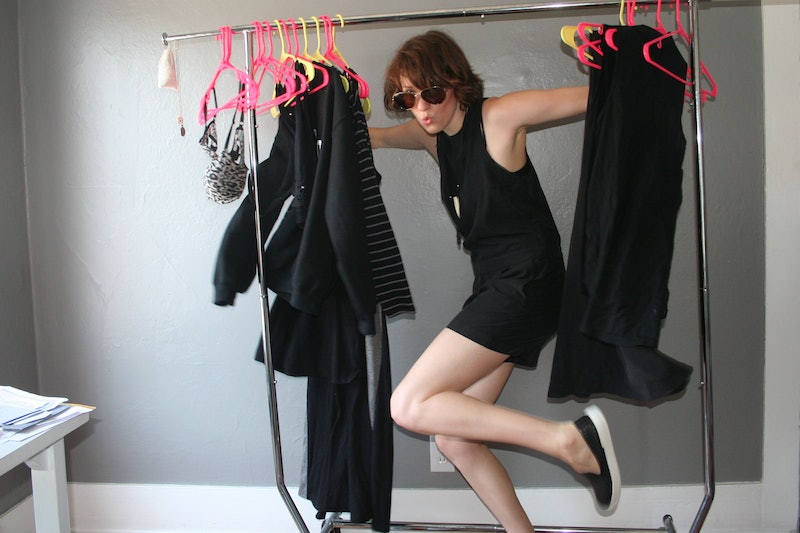 Black will never go out of style; it's a color that's suitable for all seasons; blah, blah, blah. I'm not hear to praise the elegance, coolness, and straight-up convenience of an all-black wardrobe. I know plenty of ladies who know how to wear black (and only black) and yes, they are everything you think they'd be: Moody, stylish, a little witchy, and touched with a sort of polished gothic-lite vibe.

HOWEVER, does anyone ever get the sense that the fashion world has taken the fun out of black? Why so serious, you gothic hordes? Why is black always associated with New Yorkers Who Work at Fashion Magazines, Parisians Who Just Don't Give a Damn About American Neon, Painfully Cool Angelenos, and People Who Are Always in Bad Moods?

My mission today is a humble one: Bring the fun back to black. Sort of. I'm not trying to reinvent the black fabric wheel here, or introduce you to Crazy Summer 2015 Trends You'll Have To See To Believe. To be perfectly honest, I was initially trying to come up with something like "fun new ways to wear black-on-black!" and I just couldn't think of any. Instead, what I got from these outfits was a sense of playfulness and ease that I normally associate with pastels and bright yellow. Plus, it doesn't hurt that they're all light and breezy enough to wear all summer without burning up like a meteor. Here are my chillest, most laid-back black-on-black tips for this season, from my monochrome closet to yours.

1. Find one perfect black item and wear it to death (and then take it to the dry cleaners, because you're nice to your clothes).

This simple outfit may not be ground-breaking, but it is perfection. I've been looking all over for a dress that's a bit dressier than a T-shirt dress but easier than most cocktail gowns — and this is it. The silk is light, flowy, and just elegant enough; the cut is everything you want in a tank dress. Wear it to rehearsal dinners, last-minute dates, happy hours with friends; slap on a fedora and you can take this thing to a poetry reading. The (night) sky's the limit!

2. Try "elevated gym wear" (aka the most comfortable fabric ever)

This jersey-knit dress can be found under the "Loungewear" section of the Alexis Mera website, which is kind of amazing. Sure, it's a maxi dress that's sleek enough to be worn to a party, but it feels exactly like a T-shirt — actually, let's be honest, it feels like a pair of pajamas. Wear it when you're running errands and want to look elusively Pulled Together, and then pile on gold necklaces and take it to that one party in Beverly Hills where it's rumored that Chelsea Handler might show up.

This may be painfully obvious, but having the wrong bra color can ruin an outfit — especially a casual summer outfit, which usually involves some combination of sheer paneling, straps that slip down, cut-outs, and/or an aura of general dishevelment. Don't forget to stock up on Little Black Bras this summer, since they basically double as a second layer when it comes to all-black looks.

This is my favorite way to wear black right now — in a painfully casual, slightly messy, totally unadorned way. It's like normcore gone Summer 2015. A look like this won't exactly take you into nighttime, but it's perfect for exploring town, vintage shopping expeditions, working from home, and being subtly pretentious.

The thought of layering clothes during the summer can make even the strongest woman weep. But if you don't feel like yourself in a one-dimensional outfit — or you're just looking for an excuse to leap through a rack of black clothing for the camera, WHICH IS ALSO TOTALLY VALID — try piling on all the sleeveless black things you own. You'll get a look that's a little more textured and visually interesting than the plain black T-shirt dress that everyone and their mother is wearing to brunch. A shark-tooth necklace never hurts, either.

If you want to wear black but don't want to think for two seconds about "putting an outfit together," I've got only one recommendation for you, missy — put on a romper and put it on fast. I could barely stay indoors long enough to take this photo. There's something about wearing a romper that makes you want to rush outside and socialize with the world. The black says "I'm cool and have feelings," but the fact that it's a ROMPER says "I don't take any of this too seriously and am potentially deranged." And what says summer more than that?