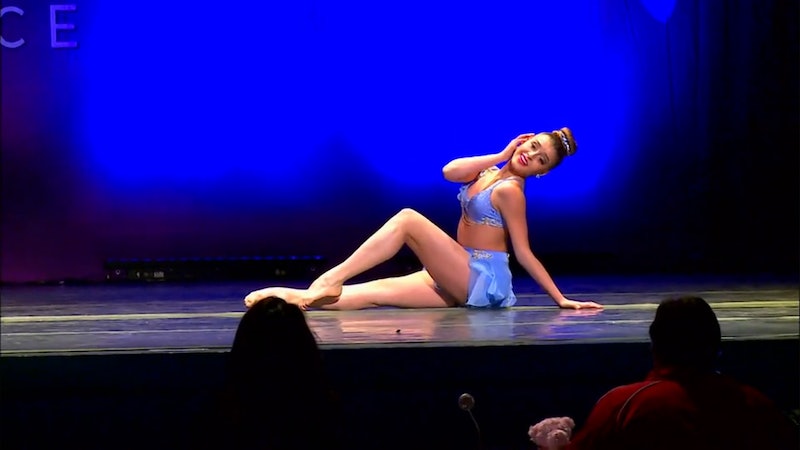 If you turn to Dance Moms to watch the moms of the dancers and Abby Lee Miller scream at each other, then the Season 5 episode "Abby vs. Kira" was for you. During the June 30 episode, the moms were concerned that the girls weren't getting enough training while out in Los Angeles, so Kalani's mom Kira on Dance Moms took matters into her own hands. Kira called up choreographer Tessandra Chavez, who had previously worked with Abby, Kalani, and JoJo on Abby's Ultimate Dance Competition to see if she'd be interested in teaching a class. But that wasn't the worst of it since the big showdown between Kira and Abby happened while the girls were at the Believe dance competition.

When Tessandra showed up to the dance studio, without Abby knowing, Abby and Abby Lee Dance Company (ALDC) assistant choreographer Gia both got insulted. Tessandra, who has been a choreographer for So You Think You Can Dance , American Idol, America's Got Talent, and The X Factor, handled herself well when she showed up to 3rd Street Dance studio. (The ALDC's studio is still being built and Abby said they should be in the new studio within three weeks, but the moms seemed doubtful.) But since Kira hadn't told Abby that the master class teacher would be stopping by the studio, it didn't go over well with Abby or the dancers. The girls thought their moms were being disrespectful and after Abby acted as if she didn't know Tessandra (even after Tessandra explained they had worked together previously and was very polite), Tessandra left the studio.

When they got to the competition, things were still heated between the moms and Abby. Since the Believe dance competition critiques the dancers after they perform, the moms thought they were validated in thinking that their girls needed more focus on training based on the judge's comments. Abby ended up crying and the girls went to comfort her, but when Kalani, JoJo, and Nia went to hug Abby, she told them to get away — and only accepted hugs from Maddie, Mackenzie, and Kendall. Kira was understandably not OK with Abby shunning her daughter, and flipped out (even by Dance Moms standards!) at Abby.

Kira told Abby to go to hell (multiple times) for blowing off her daughter and Abby dealt a low blow by saying Kalani would rather be with any other mom there and even insulted Kira's personal life. Abby left the competition and didn't see the group dance, but Kalani asked her mom to let her stay to perform "Dance Bop." Kalani performed, but Kira said she can't promise that Kalani will stay with the ALDC.

Although Kira and Kalani were both in the preview for next week's episode, the show still left it up in the air if the pair will be leaving the show. If Kalani has her say, she'll stay, but as the preview showed her astutely saying, once you piss of Abby, she stays mad at you forever. So maybe leaving Dance Moms and that hostile environment would be the best bet for the talented and beautiful dancer.