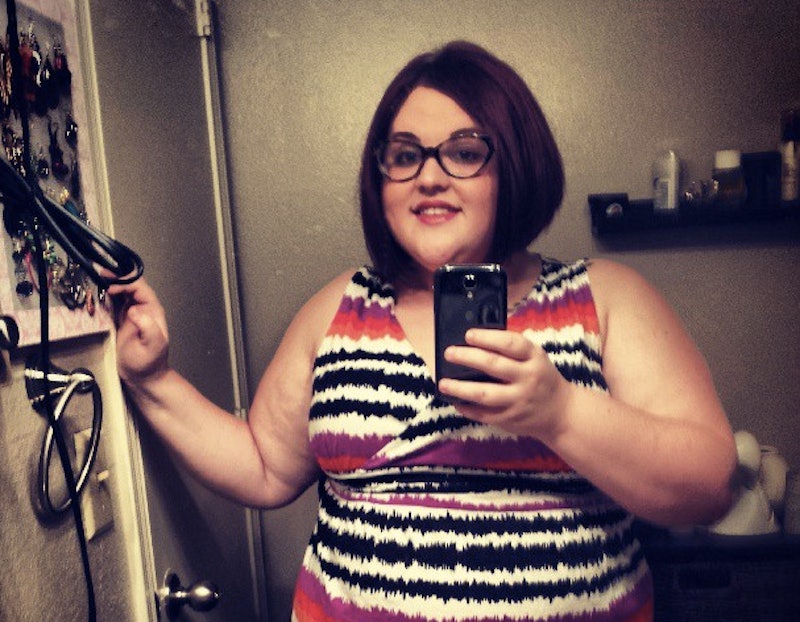 There’s a lot of talk this week about the ubiquitous selfie. It’s the word of the year, and if you have an Instagram account then a quick scroll through the images will reveal a ton of selfies from people of all stripes. Some people don’t think this phenomenon is a good thing. At Jezebel, Erin Gloria Ryan writes that selfies are a “cry for help.”

“Selfies aren't empowering; they're a high tech reflection of the fucked up way society teaches women that their most important quality is their physical attractiveness," she writes.

After reading Ryan’s article, a lot of people on Twitter felt that they just didn’t identify with the assertion that selfies aren’t empowering. For those of us who don’t fit into the white, cisgender, thin beauty standards that are all over TV and the magazines, selfies can be a truly radical act.

My own body acceptance journey has been weird, but the fact that I can take a photo of myself and share it with millions of strangers means, to me, that I have come a long way. When I look back at high school, I only have a few photos of myself because I felt fat, ugly, and unphotographable. That’s a pretty shitty feeling, and one that is probably not as familiar to women who do fit into the traditional standard of beauty. When your own body is easily accepted by others, It’s difficult to understand how something as simple as a photo of yourself could be radical.

Like it or not, the personal is political and our bodies are perhaps the biggest representation of that. Sleeveless tops are a particularly huge issue for me, as a fat woman. For years, I would not be seen in public without my shoulders and upper arms covered. Fat arms were gross, all the magazines said, and I didn’t want to disgust myself or other people. Now, sleeveless shirts are the least of my worries. I’m rocking tights, leggings, skinny jeans, and whatever the hell else I want because I feel more empowered as a woman. Selfies have been a huge part of that discovery. When I can look at a picture of myself, say “Wow, I look flossy today,” and post it to the judgey masses, that is a victory. That means something.

This empowerment also applies to women of color, trans women, and people with disabilities. When you look in the media, as Mikki Kendall suggested on Twitter, there are very few examples of fat, trans, or dark-skinned women. As such, selfies present themselves as a way to make our bodies visible, and in a radical way. So you take your selfies, peeps — they’re one way to say “fuck you” to the body standards that have made us miserable for so long.

The article inspired a hashtag, #feministselfie, that I really urge you to search and read. I took my own feminist selfie (wearing a terry-cloth head wrap a day after chemical-burning my face with some wicked fruit acid skincare shit) giving a “girl please” look to the idea that my photos aren’t empowering. I decide what empowers me, not anyone else.

Check out my 5 favorite examples from the #feministselfie tag.