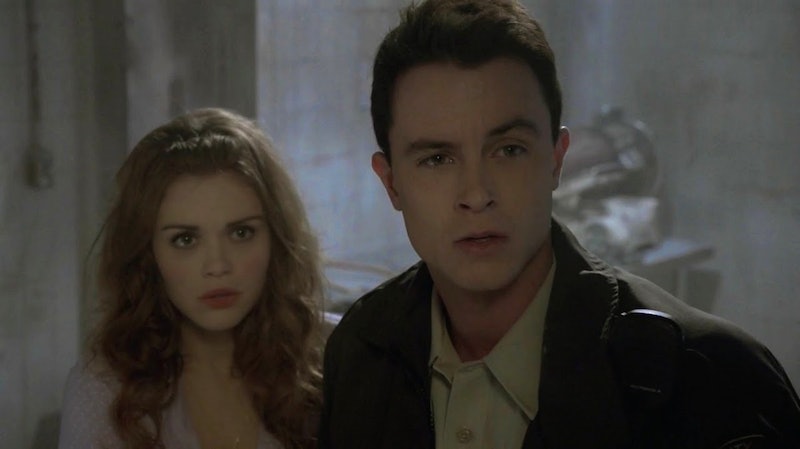 Whether you like it or not, it looks like Lydia and Parrish are on their way to coupledom in Teen Wolf Season 5. From the very first episode of the season, we've already seen that these two have a deep connection. In fact when Parrish is stabbed by the electric blue talon-wielding werewolf that attacks Scott for his True Alpha power, the only way he keeps it together before the police come to rescue him is to hallucinate an image of Lydia telling him to stay with her. In the second episode, we see the two interact together and learn that they've spent the summer pouring over research together to discover what type of supernatural creature Parrish is. Unfortunately they have yet to figure it out. (Side note: A simple skimming of Harry Potter shows Parrish is probably a phoenix!) So will Lydia and Parrish become a couple this season? They're definitely growing closer and closer.

Not only does Lydia trust Parrish enough to spend time with him and help him discover his supernatural identity, she seems to also enjoy spending time with him and vice versa. It's probably a boon to have another friend in the Sheriff's department who isn't bound by actually being the Sheriff, unlike Stiles' dad. And also, Parrish is younger in age so he can probably relate a little more to the pack.

Plus, we've already seen in the sneak peek for Season 5 that Parrish is the one who teaches Lydia how to fight which clearly comes in handy as we saw in her daring escape attempt from Eichen House where she has both great physical and supernatural fighting talents. But there's just one major problem with this potential union: It's a little creepy thanks to the age problem. Now we don't yet have conformation of Lydia's official age — aka whether or not she's officially 18 yet — but if she is still a minor, Parrish should know better than to flirt with her and potentially couple up with her.

Once Lydia graduates, the whole situation won't be so uncomfortable once you really think about it. But for now Marrish should probably just stay friends and fighting partners, especially since a lot is about to happen thanks to Lydia's flashbacks from her Eichen House night in the Season 5 premiere. And what's the most important thing these two should be thinking about together? What the heck is Parrish? We know from Lydia's flashback thing that he's standing behind fire with burning orange eyes. And we've seen those burning eyes in action when electric blue talon-wielding man attacked Parrish.

I need to know what Parrish is and I feel like that needs to be a top concern for Lydia and Parrish as well, especially after what happened in the Season 5 premiere and what's going on with Tracy and The Doctors that the gang have yet to meet. But since things are clearly about to get bad for Scott's pack on Teen Wolf, maybe Lydia and Parrish spending a little more quality, flirtatious time together (after she turns 18) isn't the worst thing in the world. In fact, it might be the brightest spot in a sure-to-be dark season.