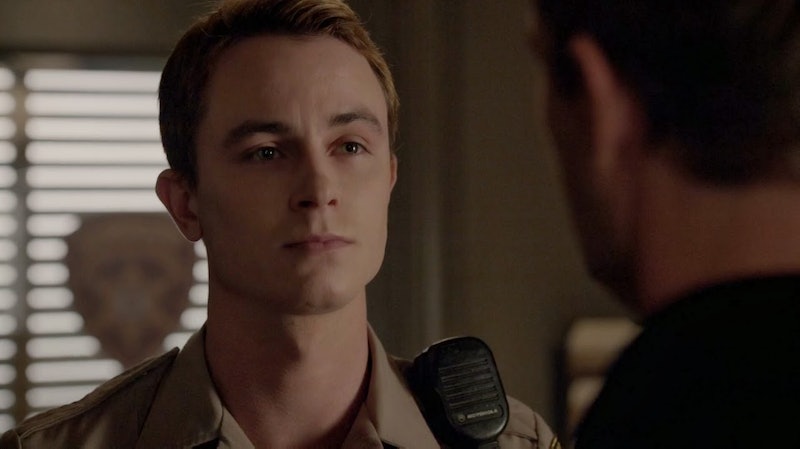 When the second portion of the supernatural dead pool was deciphered on Teen Wolf two weeks ago, Lydia and Malia might have been the only ones making surprised eyes at Deputy Parrish's inclusion on the list. Certainly, there were few in the audience left reeling from the reveal, because that guy's arrival in Beacon Hills has been about as fishy as noticing that the new girl who sits behind you in Calculus keeps growling and flashing her eyes neon-blue during quizzes. I was at least surprised to find out that his first name is Jordan... and prefer to still call him Deputy.

In the penultimate episode of Teen Wolf's truly chaotic Season 3, when everyone was officially wondering why the cute new deputy was getting so much screen time, Parrish told Sheriff Stilinski that he had "felt drawn [to Beacon Hills]." Oh, you mean like how Doctor Deaton the Mysterious said the Creepy Ass Nemeton would serve as a supernatural magnet, drawing creatures to Beacon Hills? Cool. The real question is and always has been: exactly what kind of supernatural is Deputy Parrish? There are plenty of theories out there for what everyone's favorite new deputy might turn out to be — including secret bad guy (no!), Werewolf (sure), and Banshee (I'll allow it if it will help Lydia stop, ahem, slowly losing her mind) — but here's mine (and plenty of other people's): Cutie McGreenEyes is a Phoenix.

A Phoenix is a mostly immortal bird from Greek mythology that can regenerate when it's their time to die. As we all know from Harry Potter's Fawkes, typically, a phoenix will burst into flames upon death...

...and are reborn from their own ashes into new life.

Parrish, assuming he's as innocent as he looks and acts, seems to not totally be clued into the fact that he's supernatural. If he is a Phoenix in his first round of life, that might make sense. It's hard to know you burst into blames upon your death until you, you know, die. Of course, if he is aware of his powers, and actually 9,000 years old, being a Phoenix would be pretty easy to hide, and there would be plenty of reason to. In some legends — and again, I call on the imagery of J.K. Rowling — a Phoenix can not only heal itself as mortality looms, but also other people who are in death's grips.

Even following a season where a very main character died, Season 4 of Teen Wolf has been particularly relentless in suggesting that a main character is going to bite it. Last week threatened to take out Malia, Kira, and the main-est of the main, Scott. This week's promo for "Time of Death" is hitting the Scott well again, but it's a little hard to believe that we'll ever lose our titular teen wolf. It's easier to believe, as the mid-season promo suggests, that Derek's growing humanity might catch up to him in a seriously definitive way. And it would be particularly Teen Wolf-ish (and maybe a little hot, present parties considered) if Parrish could save Derek with his regenerative Phoenix powers.

Whether Parrish is a Phoenix or not, Season 4 seems to have been themed around the idea of "rising from the ashes." Just check out Lydia, Scott, Stiles and Derek all, uh, rising out of ashes in the Season 4 promo. The sequence ends in with the phrase, "Can't Go Back." I'm personally hoping for a little irony: you can't go back, but you can start over, or with the help of your local Sheriff's department, regenerate. Operation Don't Let Derek Die.

But that's all just guess work; let's look at a few facts. There wasn't much to suggest that Parrish might be a Phoenix when he was introduced at the end of Season 3, implying that creator Jeff Davis might have had the "I just felt drawn here" character set up, but not perfectly worked out for Season 4. Now Season 4 rolls around, and Parrish has a fancy new hair color. Why would actor Ryan Kelly suddenly need to go from blonde to auburn? Oh, I don't know, maybe because Phoenix are almost always depicted with red and yellow coloring... and he already had the eyes.

When Parrish found out he was on the dead pool, which he doesn't technically know is for the supernaturally inclined, his first reaction to his $5 million ticket price was, "Maybe I should kill myself!" Maybe he wasn't really joking, because he knows he would just come back to life. Because he's a Phoenix. And speaking of that dead pool bounty, $5 million is no Werewolf beta sum, however, I will concede that it also seems a little low for a creature as majestic and rare as a Phoenix. But it could also be low because killing a Phoenix is a little, uh, counterproductive.

Finally, let's just look at the mid-season Comic Con trailer that basically screamed, "THIS GUY IS LIT ON FIRE AND COMES OUT UNSCATHED!"

The sneak peek at the latter half of Season 4 hits us with a Sheriff's Department car on fire, and then Deputy Parrish, naked, covered in ash, and definitively not dead, slamming through the doors of the police station to kick some ass and maybe save some lives. Believe me when I say, if Parrish is a Phoenix, I look forward to seeing him rise from the ashes.